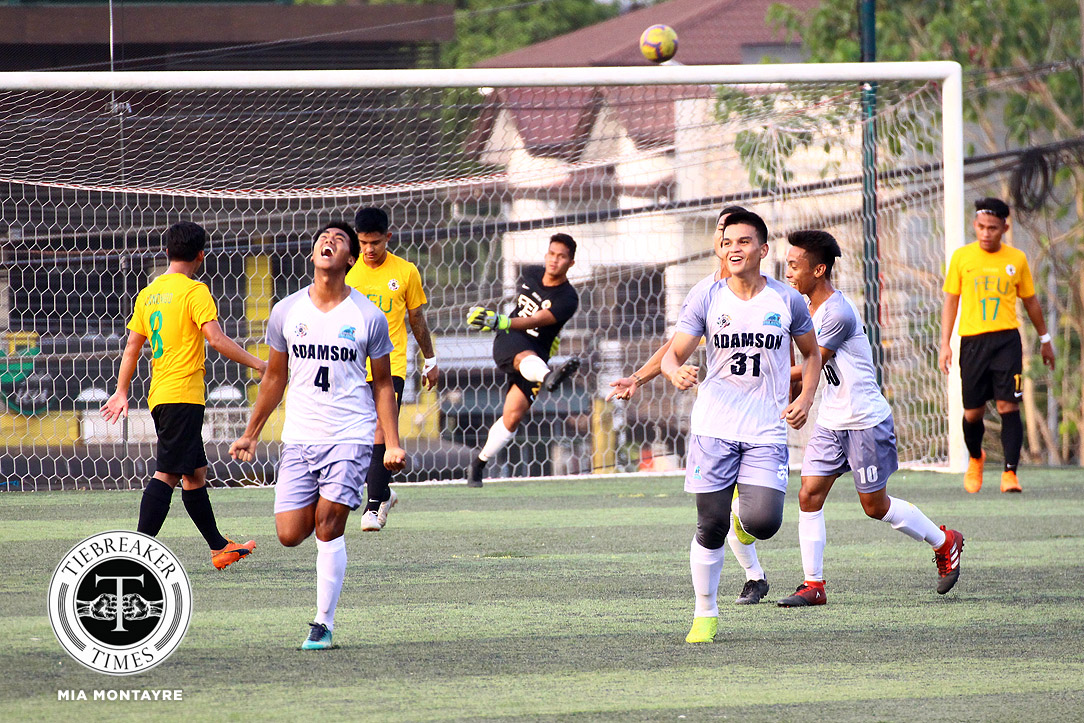 The result may just have been a draw, but it very much felt like a win for the Adamson University Soaring Falcons.

Up against the current league leaders of the UAAP Season 81 Men’s Football Tournament, the Far Eastern University Tamaraws, Adamson secured a 1-1 stalemate on Thursday afternoon, in FEU’s Diliman campus.

“We lost against Ateneo last time. Ang laki ng scoreline, four-zero, but we went back to the training board. Since we know this team (FEU) is very tough, sila nga yung number one (ngayon sa standings), so the focus approaching this game is we were going to defend,” said Adamson coach Arvin Soliman.

Adamson defended resolutely right from kick-off, and managed to escape the first half unscathed despite FEU’s constant bombardment on their home turf. However, it looked like all of the Soaring Falcons’ good work was undone when winger Gio Pabualan scored his third goal of the season in the 61st minute with a fine one-touch finish.

But four minutes later came Adamson’s salvation. The Soaring Falcons won a free kick in dangerous position within the Tamaraws’ half, and Jusuel Pilarca stepped up to deliver the ball into the box. Kim Bardaje then eluded the attention of the FEU defense and headed past Dave Parac for the equalizer.

To say FEU were stunned by Bardaje’s header would be an understatement. Park Bo Bae’s men ventured forward to seize the goal that would save their blushes, but luck and perseverance were all on the Soaring Falcons’ side.

Pabualan thought he scored the winner, only for it to be correctly ruled out due to offside. Meanwhile, Soaring Falcons goalie Carl Viray produced one of the saves of the season when he denied substitute Jermi Darapan deep in stoppage time.

READ  NU Lady Bulldogs not just a team of rookies

In the end, Adamson acquired a point for their endeavors after 90 minutes but, more than the result, it earned some pride for its program this year.