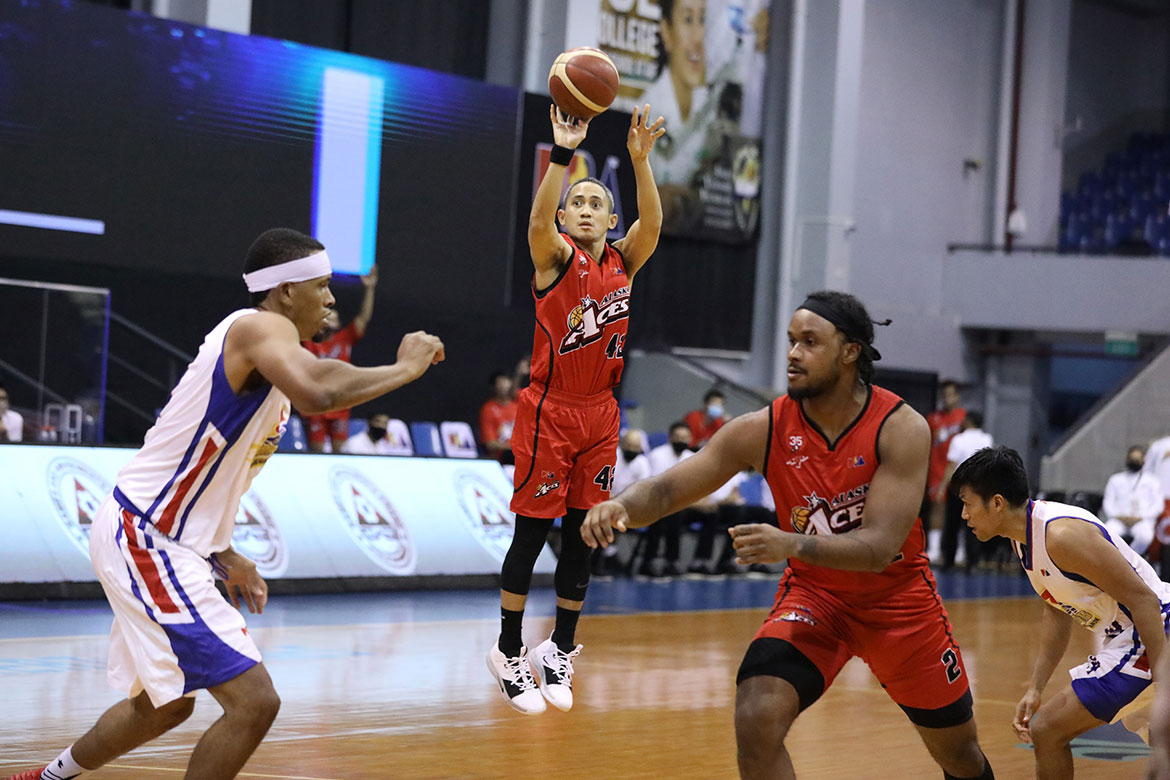 JVee Casio made sure that Alaska won’t fall into a 0-3 hole in the 2020 PBA Philippine Cup as he helped his side down Magnolia, 87-81, Saturday night at the SMART 5G-powered Angeles University Foundation Sports and Cultural Center in Pampanga.

The 5-foot-10 guard made the biggest stop of the night with 15 seconds left to play, swatting away the three-point attempt by 6-foot-4 Jackson Corpuz to shut the door close for any potential comeback by one of the tilt’s favorites.

Casio, who only had a grand total of two points in the Aces’ matches versus TNT Tropang GIGA and Meralco, was impactful on the offensive end as well as he finished with 17 points on 7-of-13 shooting.

“I challenged the guys going into tonight’s game that we just need to be better in what we do. And the guys showed it tonight — defensively, they were a lot better than the first two games,” said Coach Jeff Cariaso post-game.

Jeron Teng topscored for the Aces with 19 points, along with six rebounds. Abu Tratter and Mike DiGregorio chimed in 10 markers each as the team sought other sources of offense after Vic Manuel got limited to just nine.

“We just tried to give others an opportunity because the defense has been really focused on Vic, and we know that coming into the game, so you gotta have other guys who are threats out there,” said Cariaso.

Teng — who averaged 14.0 points in the first two games — scored eight points in the final period, including six straight that turned a two-point deficit at the start of the frame to a 68-64 lead with 9:25 to go.

Magnolia, though, responded immediately with five straight points to regain the upper hand but Tratter was there, first scoring off a jumper and then sinking his foul shots to give the lead back to Alaska, 72-69.

The Aces kept their hold of the driver’s seat ever since but the Hotshots just kept on closing in, and a Jio Jalalon one-hander with 1:47 remaining closed them to within one, 79-80.

It took a while for both teams to make baskets since then, until DiGregorio sank a triple from the top of the key to expand the Milkmen’s lead to four, 83-79, with 54.6 seconds on the clock.

Mark Barroca tried to go up for a jumper seconds later to cut the deficit but Manuel deflected his shot. The veteran guard, though, managed to score with 33.2 seconds left after Tratter was called for goaltending.

But seven seconds later, DiGregorio coolly sank his shots from the charity strip to widen the gap to four again, 85-81. Casio’s stop then happened afterwards, and Teng made his foul shots to settle the final count.

“We approached this game thinking we were 1-1. And I say that because we felt like we should’ve won that first game. Mistakes we made were our mistakes, things that we could control,” said Cariaso, referring to their 95-100 loss to TNT last Sunday, where they lost a 16-point lead. “So when you approach it that way compared to being 0-2, I think the mindset is different.”

Barroca had 16 points and five assists to lead Magnolia, who sank to 1-2. Paul Lee, who saved his side versus NLEX last Wednesday, added 14 markers on 16 shots as several Aces took turns in guarding him.

“First of all, there’s really not one person who can defend Paul Lee. I think Mike did a great job of taking that responsibility. So did Robbie [Herndon], so did Jvee for a little bit, and so did MJ Ayaay. That was really our purpose, to get a few guys guarding him, guys who had rest and are not tired because guarding Paul, you need to be ready, you need to be focused,” said Cariaso.

The two teams will see action again on Tuesday, Oct. 20. Alaska will look to build a streak when it faces Blackwater in the 6:45 main-eventer, while Magnolia plans to bounce back versus Meralco at 4:00 p.m.