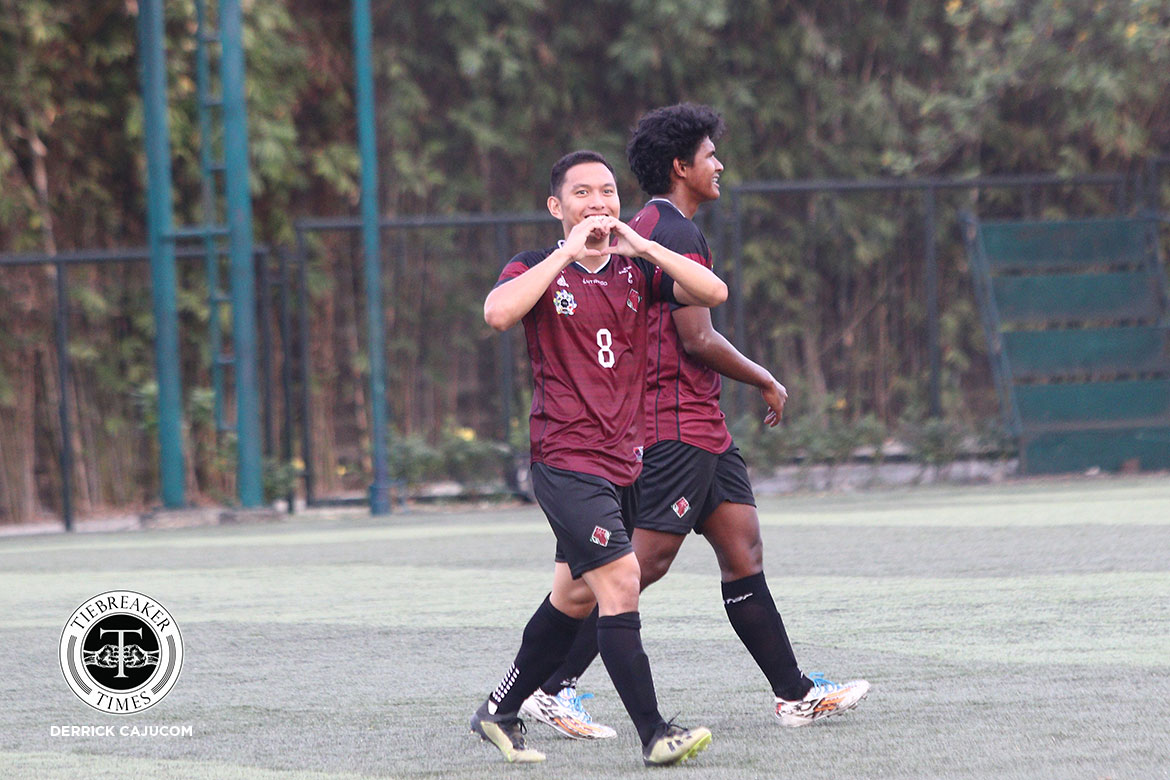 The reigning UAAP Men’s Football champions needed both a team effort and individual skill to set the tone for a campaign for back-to-back titles.

A familiar hero made his presence felt in the Fighting Maroons’ debut as winger JB Borlongan delivered from a free kick to pack all three points for Diliman-based side, 2-1, over the upset-conscious National University, Thursday afternoon at Far Eastern University Diliman Football Field.

“More than defending the championship, the philosophy has been constant improvement,” the former national team standout shared. “We weakened in some areas from last year, especially in the back line. Fortunately, they (defenders) have embraced the role.”

This transition of converted of wing backs to central defense was evident early on as the Bulldogs stunned the Maroons with an opening goal of Joshua Broce. The striker blasted a ball from the top of the penalty box and over the UP keeper Anton Yared for the go-ahead, which is something that the defending champs needed to ponder on.

Nonetheless, the coaching staff knew that the Maroons have that experience and composure to turn this around and it needed some brilliant switch of personnel to finally put the Maroons on the board.

Known for their short passing and combination on the attack, seniors Kyle Magdato and captain King Miyagi carved the equalizer of a nifty play inside the box. The skipper set up his batchmate, who transferred from the right to the left and Magdato sent a low shot past NU keeper-captain Ross Lee Lawagan.

“There was never any doubt when NU scored the first goal that we would come back because NU scored that goal because we lack the drive,” Gonzales admitted. “There were a handful of players, a very few in fact that really wanted it. The challenge was for the coaching staff to switch on those other players.”

Fortunately, the Maroons responded well and their continuous attack from the right side this time with Miyagi and Magdato sent them to a free kick after the skipper was fouled.

The result was nothing short of expected as fourth-year Borlongan delivered another shot from the edge of the pitch and into the onion bag and past Lawagan. A routine goal from the forward sent the Maroons into the lead at 2-1.

That turned out to be the game-winner as the Bulldogs tried but faltered in their last-gasp attempt at an equalizer.

The Fighting Maroons (3 pts) will take on their archrivals from across Katipunan Avenue, the Ateneo De Manila University, in what is expected to be an intense battle on Sunday, March 3 at 9 a.m. On their part, the Bulldogs (2 pts) will face the University of the East (6 pts) later that day at 1 p.m. Both matches will still be at FEU Diliman.