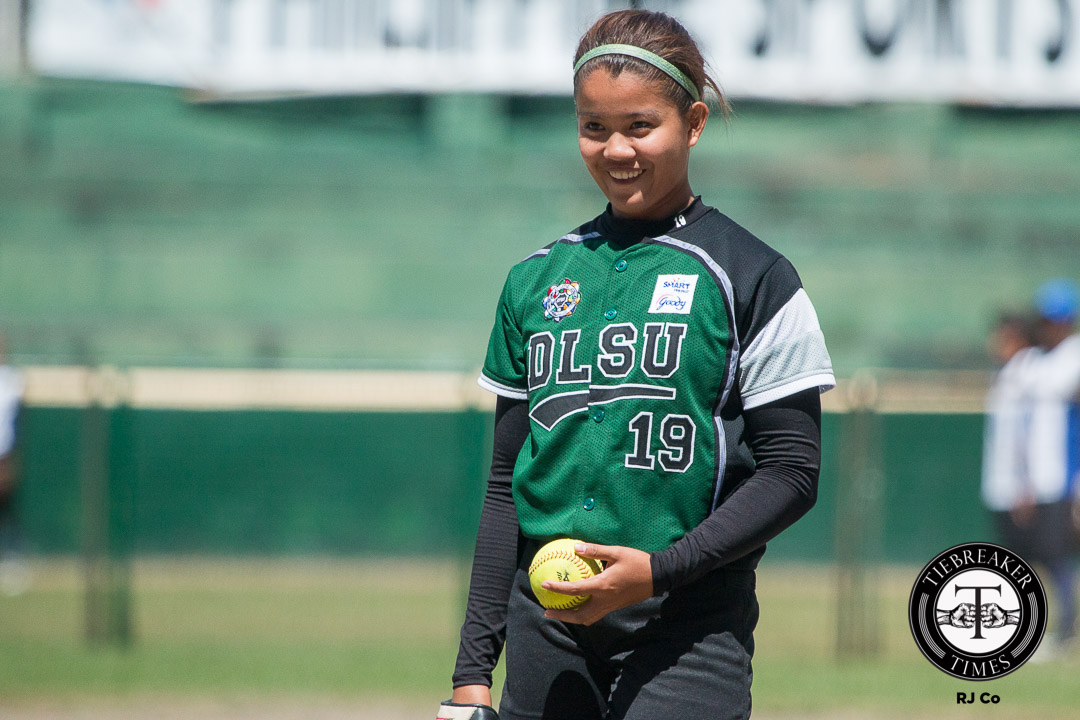 Though the De La Salle University Lady Batters have found a gem in rookie pitcher Kiana Juan, their opponents must not forget the one who started it all.

Team captain Jamica Arribas may be playing as a relief to the talented newbie, but she came up huge when needed, as the Lady Green Batters out-hustled the National University, 6-5, to break to six wins, Saturday late morning at the Rizal Memorial Baseball Stadium.

The victory raises La Salle’s slate to 6-3 – half-a-game ahead of NU – for solo second.

After a sluggish outing over Ateneo, the Taft-based side had to start Juan back at the mound. Nonetheless, it proved to be costly.

Fortunately for La Salle, the Bulldogs could not capitalize on the latter’s gained bases. Instead, it was even the Green Batters who took the lead after two innings.

At the top of the said frame, Arribas was at the tail end of a double play after she took out Elsie Dela Torre in first base on the throw of shortstop Nica Velasco. Velasco earlier took down Leila Tarroza on the fly ball.

Bernadeth Benson then reached base off a throwing error of NU second baseman Roseann Banatao to first, before Juan blasted the ball over the fences to put La Salle on top at 2-0.

National U had not won five games prior to this on  to just roll over and die. They even snagged the lead two innings after, as it was La Salle’s second baseman Gladelyn Alipato who made a defensive miscue on Dela Torre’s turn at bat. The La Sallian had earlier made a catch on a fly ball, then made amends with another stop after that error.

The damage had been done, however, as after Mary Ann Ramos plucked a base hit for the Bulldogs, Rhea Rosales duplicated the single and scored both Dela Torre and Ramos. Afterwards, Mariss Tuliao sent Rosales home for the 3-2 margin.

National U added another run at the following inning, the fifth, but the Green Batters found resolve on their side of the frame, thanks to a combination of timely hitting and Bulldogs’ errors.

Velasco got her lone RBI of the match as she scored Arisa Miranda to cut the deficit to one, 3-4. Then, with Benson batting, Pearly Lorca fumbled a high ball as Velasco and Arroyo crossed the plate. Alipato erased all the mistakes she made as she sent her skipper Arribas home as well with a clutch single.

Arribas scored, and in the following inning took over the mound and anchored the La Salle defense. Despite allowing another run, the former Rookie of the Year pegged National U’s hitting count to just eight at the end of the two-hour tussle.

Arribas was credited with the save after holding NU to a single run in the last two innings, and she also provided the eventual winning run. The La Salle pitching duo paced the defense after limiting National U to just five runs on eight runs, stranding four on the bases.

Juan’s first homer of the season was the highlight of the day, as it scored two when La Salle needed it most. Velasco and Alipato added an RBI each, with the former crossing home once as well.