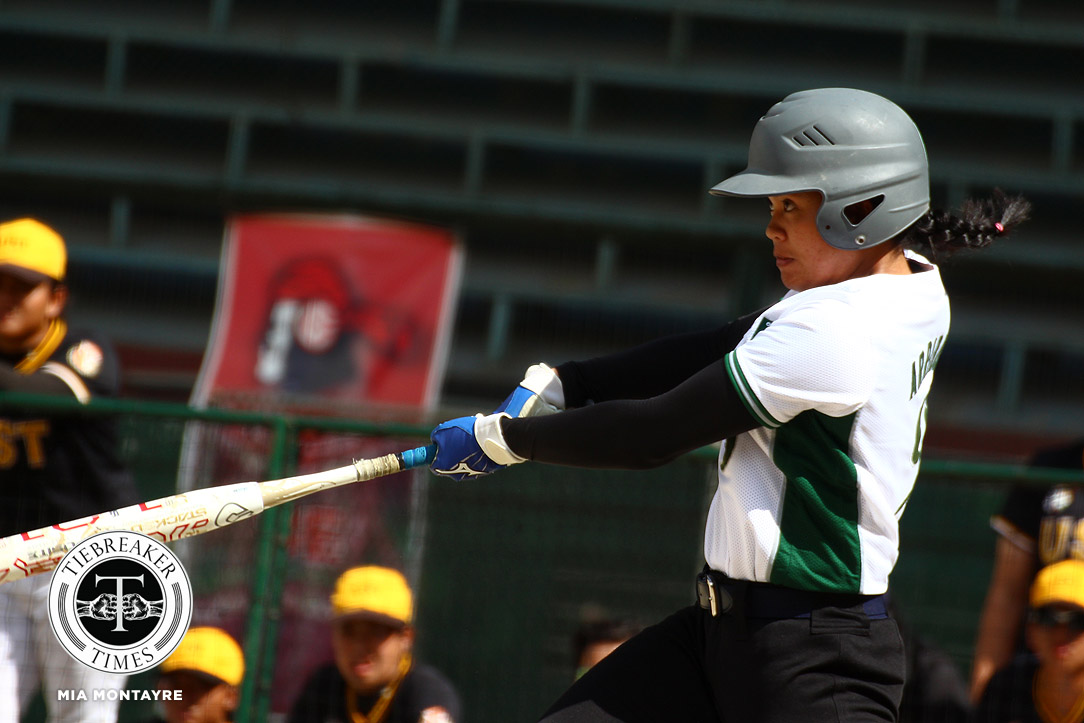 De La Salle Universty Lady Batters head coach Jasper Cabrera shared that he’d kept challenging his team to make history. And after getting that semifinals slot they wanted, the girls from Taft were not yet done.

Team captain Jamica Arribas inspired the rest of the Lady Green Batters as they decimated the University of Santo Tomas, 7-0, in an abbreviated six-inning game. They took the twice-to-beat advantage in their Final Four battle, Monday afternoon at the Rizal Memorial Baseball Stadium.

Cabrera admitted that after the loss against Adamson the other day, he had needed to remind the girls of what they can do in this game against the Tigresses. “Sinabi ko lang sa mga bata na kunin muna natin yung goal natin [na Final Four]. Tapos ngayon nakuha na natin, pwede pa nating kunin yung number two.

Clearly, the Lady Green Batters – led by their skipper – had studied the plan and executed it well, since they  peppered the UST bullpen with seven hits that scored big.

Arribas opened her account for the day and the La Salle barrage with a triple in the first inning past center fielder Jessie Belano to score fellow senior Nica Velasco. UST rookie pitcher Celyn Ojare then retired the side on two strike outs.

The fifth-year La Salle stalwart got her second of the day in the third inning, this time a two-run homer near the same area, but now slightly to the right past Jacklyn Bihag. She once more sent Velasco home, then herself as well, to the delight of the Green and White faithfuls in attendance.

Orisa Miranda followed her captain’s lead as the Lady Green Batters added two more runs in the following inning for a 5-0 margin. The La Salle third baseman produced a similar triple to Arribas’ opening hit to score Chinny Ejar, before she slid home on account of Velasco’s two-base hit.

With the twice-to-beat advantage on the horizon, Arribas did what she had to do and wasted no time putting the nail on the coffin. The senior La Sallian needed just a hit, and did just that to bring Velasco and Ejar home to seal the regulation win for her side.

The senior skipper ended with three hits in three at-bats in an almost complete hitting cycle, assisting on four runs of her team’s seven. On the defensive side, rookie Kiana Juan allowed just five hits on UST’s potent batting silencing the likes of Tin Palma, Charlotte Sales, and Trisha Tiozon.

The Lady Green Batters and the Softbelles battle one more time, this time for a place in the Finals. La Salle will have the twice-to-beat advantage over UST, and will need just a win in Game 1 on Saturday, March 23 to claim their date on another historical feat – the championship round.