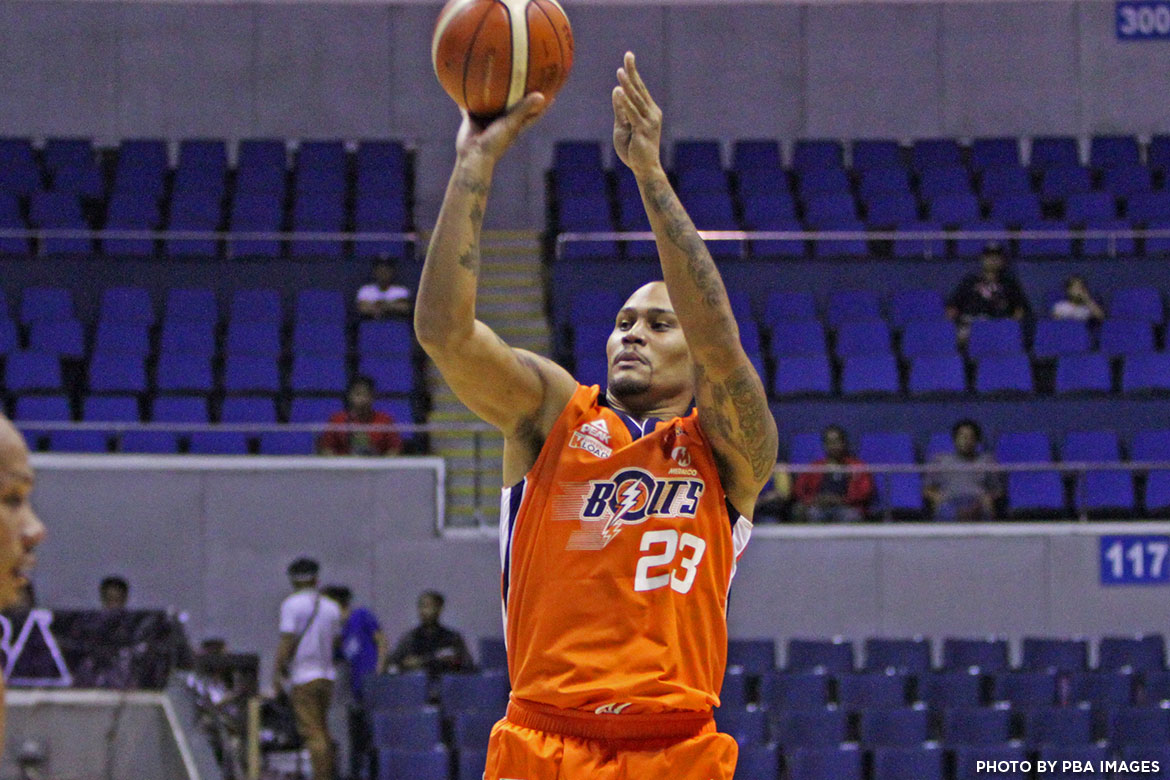 It has always been known that the Meralco Bolts have lots of players who can provide when needed especially during crunch time — from the likes of Jared Dillinger, Cliff Hodge, Chris Newsome, and even Baser Amer.

But on Sunday night against the Blackwater Elite, the Bolts just found another weapon in their already-stacked artillery, a weapon that can be as reliable — the wide-bodied 6-foot-6 bruiser Kelly Nabong.

In the game itself, Meralco found themselves trailing by eight, 80-72, entering the fourth period. But they quickly got back up on their feet and unleashed a wild 18-4 scoring spree to suddenly turn things in their favor.

And in that particular stretch, it was the Filipino-American who served as their anchor.

Always known as an inside player, Nabong showcased his extended game, hitting jump shots, floaters, and lay-ups with ease. He scored nine of Meralco’s 18-point surge in that run, and as the final buzzer sounded, he made 11 of his 13 markers in the payoff period alone — matching Blackwater’s total output in the quarter.

Not only did Meralco complete the come-from-behind 102-91 victory for their franchise-best start of 6-1, but it also highlighted the way Nabong has evolved since 2012 — from a solid presence at the paint to a stretched, sweet-shooting big man.

“I practice that everyday,” said the 17th overall pick in the 2012 PBA Draft, regarding his notable development on offense.

“Day in, day out, we’re in the gym three hours a day, I get up at least 250 shots at practice. It’s all about repetition and confidence.

“And coach [Norman] Black, actually he puts a lot of pressure on us but at the same time he gives us a lot of confidence,” added Nabong, who also grabbed nine rebounds in his personal statline.

Nabong, who was averaging 6.5 points and 5.3 rebounds prior to the game, was the catalyst in the Bolts’ 11-point victory, but for him, it was their defense as a team that propelled them to their second win in a row.

“That’s our thing. That’s what got us to our record right now. We’re number one on defense, fastbreak points. That’s our thing,” stated the Sacramento, California-born Filipino-American.

“That’s what we do: We lock up everybody who comes to the gym with us.”

After Sunday night, Meralco will now be heading to a lengthy 17-day break — a layoff that might bring rust to the team. But Nabong sees it as a challenge for them — a challenge they hope to overcome as they gear towards their real goal.

“The challenge is try to stay in shape and not let up a little bit, try to be on top of our game and build a little bit of what were doing right now.”

“We’re in the quarters already but that’s not our goal. Our goal is to be in the Finals and win in the Finals,” furthered Nabong.

Asked if his outburst similar to what he displayed Sunday night will be shown in the coming games, Nabong vowed to do so.

“Most definitely. If coach Norman gives me the chance, I’ll take it and run with it,” he closed.