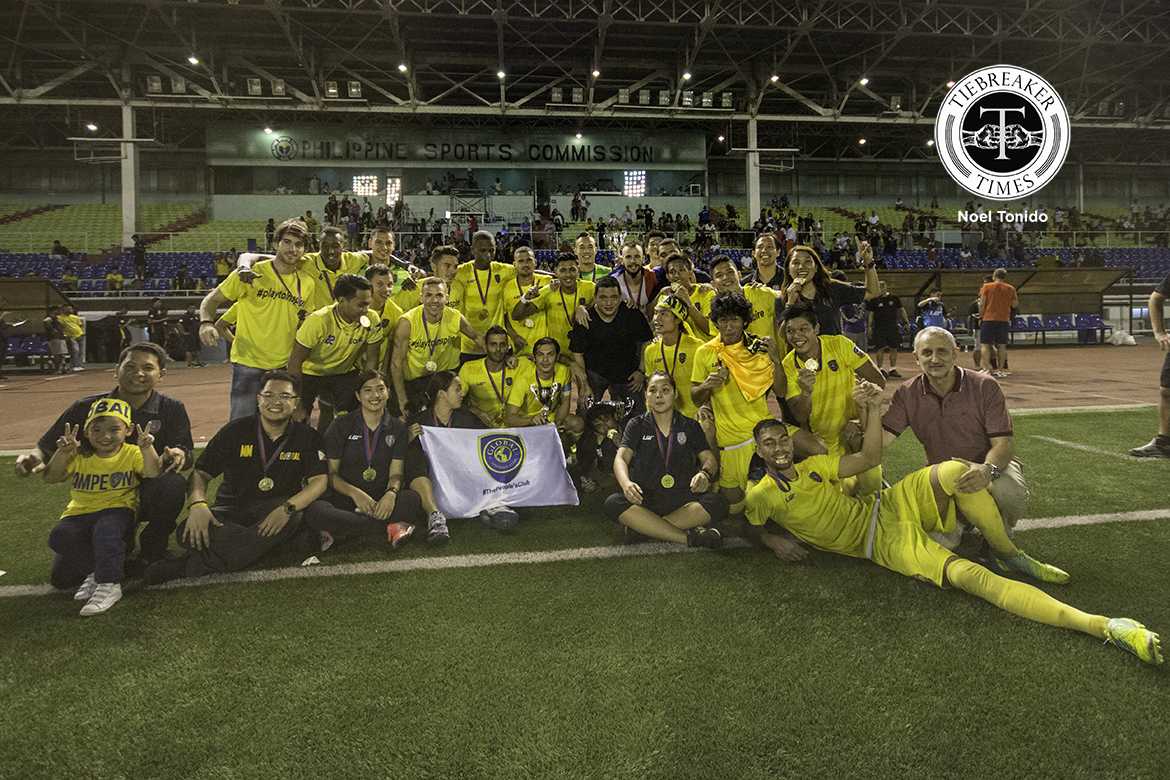 The 29-year old midfielder scored the first and third goals for his cup-winning team, sandwiching Matthew Hartmann’s strike. Nate Burkey pulled one back for Ceres-La Salle, but it wasn’t enough to spoil Global’s night.

Ceres-La Salle were favorites in the final and they went at it right away early in the ball game. Just three minutes in, Patrick Reichelt spotted an opening but his namesake Global goalkeeper Patrick Deyto was alert in catching his attempt. Reichelt once again had another shot two minutes later. His effort had the power and the accuracy to be on target, but Deyto was well-positioned to keep their opponents from scoring.

After that moment, Global began to establish the rhythm of the game. Eleven minutes into the game, Omid Nazari was presented a chance to score but he sent his shot wide. At the 17th minute mark, Daisuke Sato’s free kick was half cleared and Matthew Hartmann scuffed the rebound wide. Their next chance was fruitful, nonetheless, as Bahadoran sneaked his way around to give Global the lead at the 21st minute.

The lead was almost doubled immediately had it not been for the Ceres-La Salle defense’ reaction to shots made from close range by Bahadoran and Nazari. The duo threatened to widen the gap just two minutes after going ahead. They might have failed to do just that, but it kept Global in control and eventually finding the back of the net anew. Hartmann’s 24th minute goal did just that as the midfielder pierced the Ceres-La Salle defense with a well-struck shot.

Suddenly behind two goals, Ceres-La Salle looked to respond. Bienvenido Marañon set up a cross for Adrian Gallardo, who only headed the ball off target. Manny Ott also tried to cut the deficit but he couldn’t break Deyto’s resistance in two tries on goal. Perhaps, last year’s beaten finalists may have felt relieved not to have gone 3-0 down when Bahadoran missed a fine chance three minutes before the break. At half time, Global held a commanding two-goal lead.

At the start of the second half, Global remained aggressive. They were looking for the third goal that may well seal the win for them. Nazari saw an opening a minute after the restart, but Ceres-La Salle keeper Michael Casas read it well. However, there was nothing Casas could do about 10 minutes later as Bahadoran pocketed his second and Global’s third of the night.

Things went from bad to worse for the Negros club as manager Ali Go was ejected from play. Go lashed out at the officials for letting a non-call slip and his protest was met by an unnecessary call for him to leave the bench for the stands. It was a brief episode that may have spurred Ceres-La Salle as only eight minutes when they managed to put the ball on the back of the net.

Nate Burkey converted Orman Okunaiya’s corner into a goal with the use of his head at the 69th minute. It could have sprung a comeback but Global did well to limit the damage to just a single goal. Chances became sparse approaching full time, where it ended 3-1 for the now two-time UFL Cup champions.

After the game, individual awards were also given to the tournament’s top individuals.

Playing before the Cup final were four teams, a pair each contesting for the plate and the third place playoff.

In the plate final, the Loyola Meralco Sparks cruised to a 2-0 win over JP Voltes courtesy of goals netted by Tahj Minniecon and Jinggoy Valmayor.