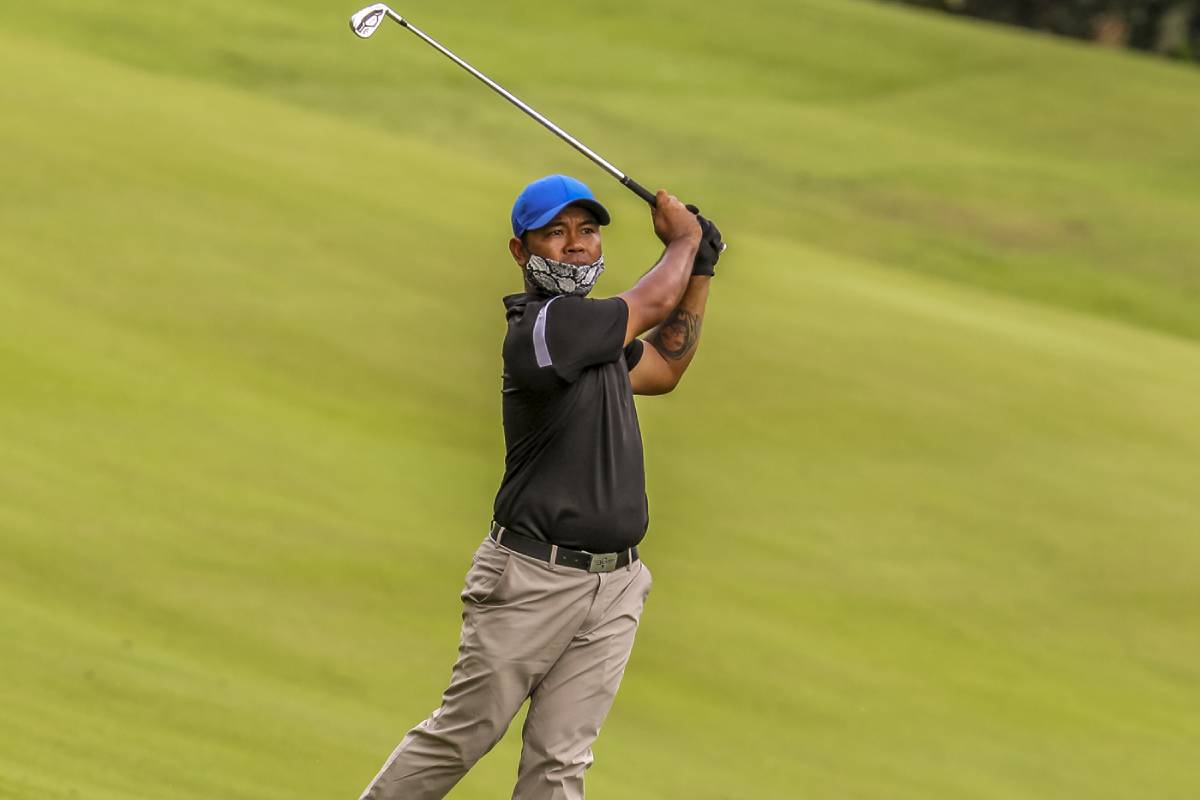 Zanieboy Gialon produced a pair of three-birdie binges on both nines to spike a stirring six-under 65 as he charged back from joint 18th and into the lead halfway through the ICTSI Riviera Championship at the Langer course in Silang, Cavite, Wednesday.

In a day of changing fortunes, Gialon put his act together and rattled off three birdies in a row from No. 12 then after trading a birdie for bogey on Nos. 16 and 17 for the second straight day, the 31-year-old shotmaker strung up another three-birdie string from No. 4 to fashion out a 32-33 card in hot but windy conditions.

That more than made up for his fumbling opening 74 as he took control of the compact field in the P2.5 million event serving as the last of two bubble tournaments marking the Philippine Golf Tour restart. He pooled a three-under 139 in a day when erstwhile leader Fidel Concepcion turned from awesome to awful with a seven-over 78.

“I played good and hit almost all fairways,” said Gialon, out to end a three-year spell after beating Jhonnel Ababa by six at ICTSI Calatagan Golf Challenge in 2017.

He also took notice of his big adjustment on the tough par-4 No. 13, which he double-bogeyed in the first round on a couple of wild shots but birdied from eight feet yesterday.

In contrast, Concepcion shot five birdies, one less than his lead-grabbing 66 marred by one bogey Tuesday, but he limped with four bogeys, two double bogeys on both par-5s, and holed out with a quadruple bogey on the par-4 14th. He wound up with a 40-38 and tumbled from the top to joint ninth at 144 with Ababa, who rallied with a 68, and Justin Quiban, who faltered with a 74.

But a mix of seasoned campaigners and rising stars kept Gialon within sight, ready to pounce in today’s (Thursday) pivotal round, led by Angelo Que, who stayed a stroke off the pace despite a 73 for a 140 in a tie with Ira Alido.

The 19-year-old Alido, joint runner-up with Rupert Zaragosa in the ICTSI Riviera Invitational Challenge ruled by Tony Lascuña at the Couples three weeks ago, broke a par-game at the back with three birdies against two bogeys at the front for a second straight 70.

Jobim Carlos, the 2018 PGT Order of Merit winner whose game went on a downswing while battling a spate of injuries in 2019, likewise heralded his return to form, albeit late as he closed out with three straight birdies at the front for a 68. He moved to joint fourth at 141 with Zaragosa, who carded a 70.

Ferdie Aunzo and Sean Talmadge crowded Gialon and Que in the lead at two-under overall in one stretch but the former wobbled with three bogeys in the last seven holes and the latter dropped three strokes in a six-hole stretch from No. 7. Both ended up with 73s for a share of sixth at 142.

Michael Bibat, another ace seeking an end to along title drought, likewise made a big surge with a backside 33 then hit back-to-back birdies from No. 5 to go five-under for the day and even-par overall. But the former Asian Games bronze medalist fumbled with a triple-bogey on No. 7 and bogeyed the next to settle for a 70 and a 146 in a tie with Albin Engino (76), American Lexus Keoninh (73), Nilo Salahog (73) and Arnold Villacencio (72).