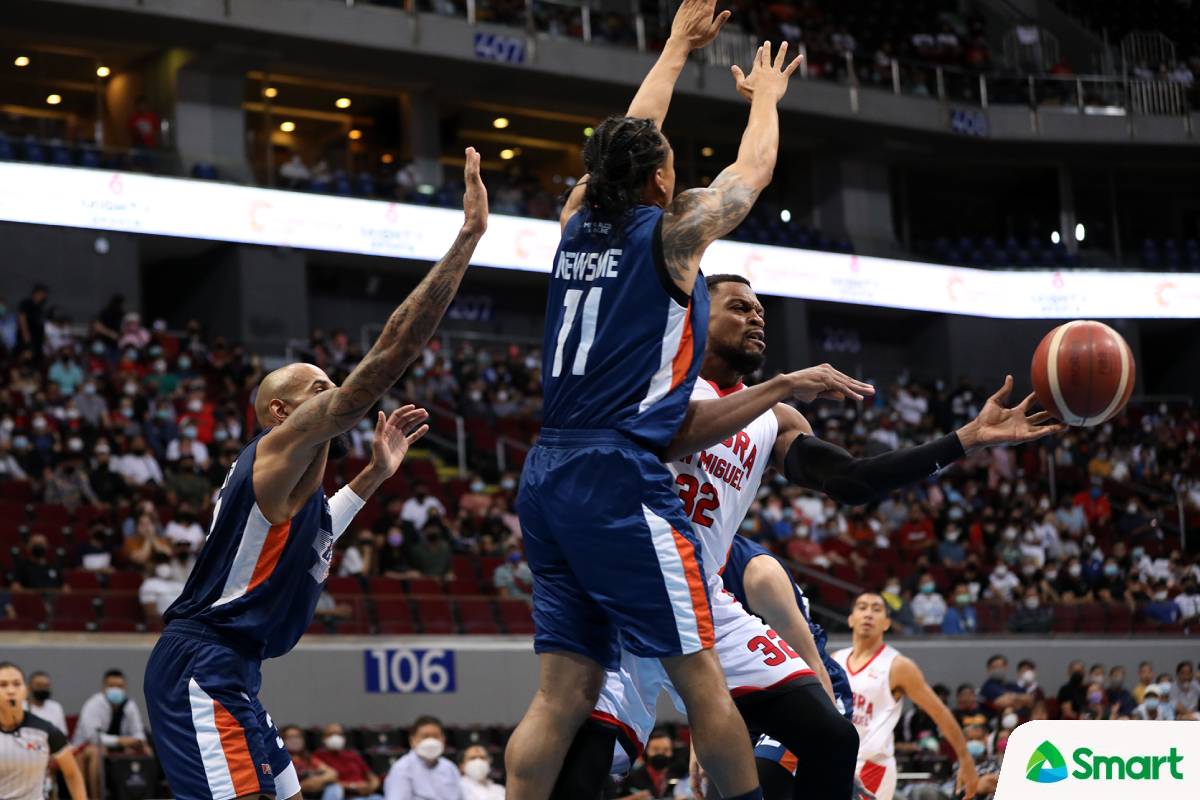 After a series opener loss to Meralco that was a byproduct of a unit that, in coach Tim Cone’s words, “played a really loose game”, the Barangay recovered by taking Game 2, brandishing some traits—their adaptability, conscientiousness, and decisiveness—resembling the team that knocked off a pair of playoff favorites to set up a fourth PBA Governors’ Cup showdown against the Bolts.

Much of Ginebra’s success was rooted in Justin Brownlee’s ability to be, well, himself. After making just seven of his 20 shots to get 27 points in Game 1, the franchise’s beloved resident import turned it up in Game 2, regaining his touch to post 36 points (12-for-18 shooting), 13 rebounds, and nine assists, along with two blocks and a steal for good measure.

The bulk of his line came in the second period, where he tallied 13 points, six boards, and six dimes, blending his shot-making with his penchant for hitting open teammates. Most of the ones who benefited were some of the Ginebra shooters who buried 7-for-11 3s during that 12-minute stretch (Ginebra was 6-for-24 in the other three quarters). Three of those triples were a direct result of Meralco reacting to the threat of Brownlee creating his own offense:

On the other hand, Game 1 hero Allein Maliksi couldn’t give Meralco anything of substance, missing all of the few (just seven!) shot attempts he put up and was held scoreless in 15 minutes of action. The 34-year-old gunner had some pretty good looks, but Ginebra made sure to force him into heavily-contested shots. It didn’t help that he picked up two early fouls in the first quarter, thereby taking out any sort of rhythm he tried to establish:

But perhaps two of the more important adjustments that helped Ginebra was sticking Brownlee at Meralco’s opposing 5 and letting Christian Standhardinger “hedge” in their pick and roll defense—a couple of small tweaks that might have helped alleviate some of the bleeding caused by the Bolts repeatedly pressuring a virtually non-existent interior defense in Game 1.

In our post-mortem from the previous game, we discussed how Meralco cannibalized a Ginebra paint that lacked a fearsome deterrent in the ever sturdy Japeth Aguilar, squeezing out 52 points on 68.4 percent shooting inside that area. Manned mostly by Stanhardinger, the Gin Kings interior suffered, especially when they played drop coverage to defend pick and rolls:

Unlike in Game 1, where Brownlee monitored Tony Bishop, for the most part, Brownlee spent a lot of time on Raymond Almazan or Cliff Hodge in Game 2, which meant that he was acting as a help defender of sorts to cover up for Stanhardinger or for any of Ginebra’s plodding bigs; Meralco still shot a healthy 59.4 percent inside the paint, but they only scored 38—that’s 14 fewer points and seven fewer field goals compared to the Game 1 carnage. Here’s one of the finer examples of that ploy:

The gains didn’t exactly manifest immediately, as Bishop took advantage in the first quarter—by slipping the screen against the hedge, by locating mismatches, or by simply shooting over Stanhardinger. Sixteen of his 31 points came in the first period alone:

Things started to go Ginebra’s way in the second quarter, as Meralco could not get much of anything going when they attacked Joe Devance and Standhardinger in lineups where both played the 5. The Bolts’ offense stagnated, mostly settling for perimeter shots and moving the ball from side to side instead of attacking north to south:

Meralco’s second quarter offense cratered (37.5 percent) just as Ginebra’s cannons got going (69.6 percent) on the other end. Nineteen of their 24 field goal attempts came from the perimeter, and a quarter of all the shots they put up during that span were triples (they only hit one). As a result, the Gin Kings entered the half boasting an 18-point lead—a margin that proved to be enough of a buffer when the Bolts rallied back in the second half.

Of course, Meralco later figured out how to crack parts of that game plan and was aided by a career night from Aaron Black.

Let’s start with Aaron first. Black somehow managed to outdo himself, following up a solid Game 1 by flashing his entire bag of tricks—dropping floaters, decisively attacking closeouts, making snappy reads, slicing through the lane, and even hitting spot-up and stepback 3s. He scored 15 of Meralco’s 29 third quarter points, sparking a comeback from 20 down and finishing with a personal-best 24 points, six dimes, three rebounds, and a pair of steals:

(Calling him “the coach’s son” undermines the work he put in to be this good. For the second straight game, we are again asking people to put some respect on his name.)

Meralco also resorted to fielding an Almazan-Hodge frontline—perhaps to cause some matchup problems and maybe have an extra finisher around the rim in the event that Brownlee helps off—and made Ginebra pay for playing drop coverage in certain instances. Bong Quinto also shined early in the fourth during that Bolts run, helping shave off points off that Gin Kings lead to make it a ball game down the stretch:

Unfortunately for Meralco—and luckily for Ginebra—the offense went cold and missed a ton of makeable shots just as the Gin Kings made timely ones enough to stave off the rally. Some of these misses came off of well-executed sets and could have shifted the balance at various points in the fourth, one way or another:

A couple of massive Brownlee plays assisted Ginebra as well, with a steal on a Chris Banchero rebound serving as the icing on the cake:

As we’ve emphasized after Game 1, this really isn’t the Meralco-Ginebra series of old. Both teams more or less have an idea of how to beat the other; at this stage, in what is effectively a best-of-five series from now on, it’s just a matter of who will land the first blows and who can adjust quickly enough to beat the other to the punch. Buckle up.