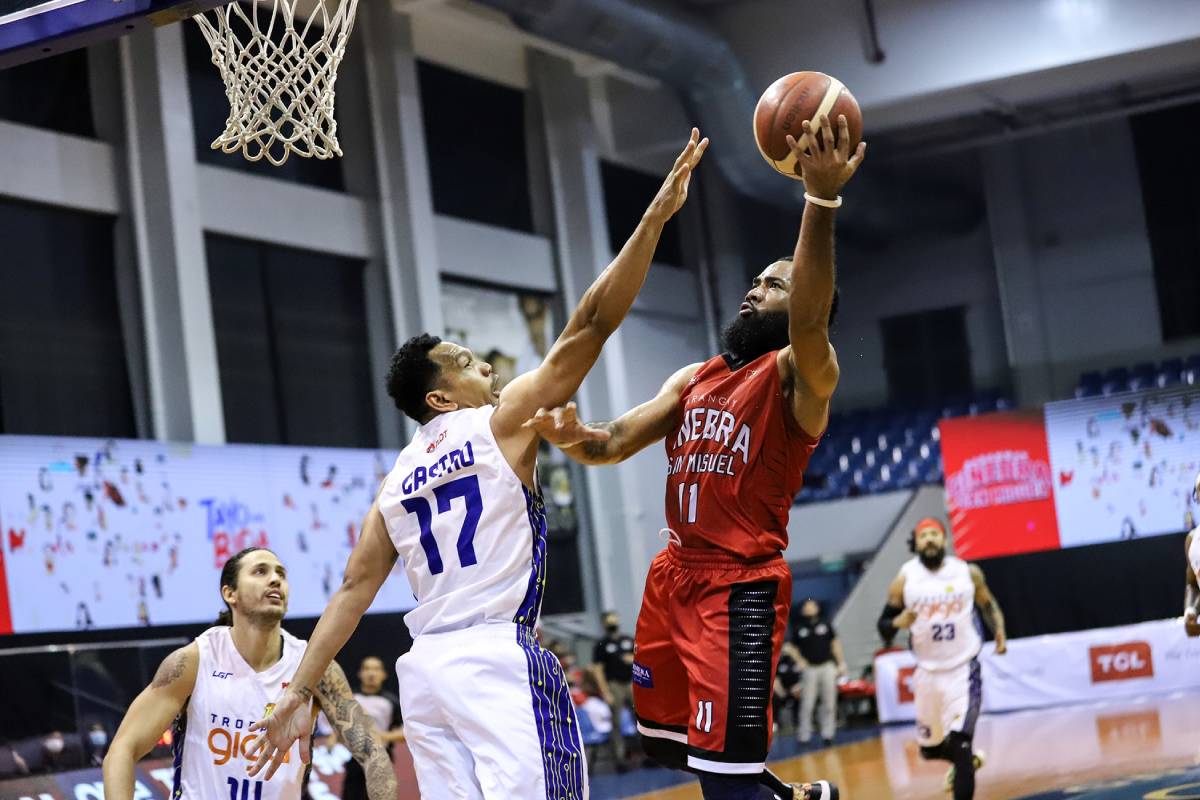 SMART CLARK GIGA CITY – Barangay Ginebra is now atop the 2020 PBA Philippine Cup all by itself after downing erstwhile co-leader TNT, 85-79, Friday night at the SMART 5G-powered AUF Sports and Cultural Center.

The Gin Kings collected their third straight win to go up 7-2 and will have a shot of clinching a top-four spot plus the twice-to-beat advantage for the next round against San Miguel on Sunday and Terrafirma the next day.

“This was so important to try to get to that top four, and this was a key game. We were just trying to find a way to win. This was playoff mode basketball for us,” said head coach Tim Cone post-game.

Stanley Pringle came up big once again as he powered the Barangay with 28 points on 55-percent shooting, alongside 12 rebounds in the victory that sent the opposition to their second loss in a row.

Japeth Aguilar registered a double-double of his own with 19 points and 11 boards on the night he collected his 600th career block, becoming just the 12th player and only the second active player to reach the milestone.

Lead court general LA Tenorio has seemingly regained his old form as he provided the stability for Ginebra with 15 points spiked by three three-pointers, on top of nine assists and five assists in over 37 minutes.

The Gin Kings played a Tropang Giga crew that was misfiring, shooting just a total of 29-percent from the field, including 5-of-41 from deep — this, after shooting 44-percent in their first eight games in the bubble.

Jayson Castro made a team-high 19 points, while Poy Erram and Ray Parks finished double-doubles each. The 6-foot-7 center made 17 points and 10 rebounds, while the latter made 15 and 13.

However, usual providers Roger Pogoy and Troy Rosario struggled all night long, with the latter failing to make even a single shot in the 15 attempts he took from the floor. Pogoy still ended up with 12 points.

“They didn’t have a lot of legs because they played [Wednesday versus Magnolia]. Three-point shooting is a lot about having fresh legs, and I just don’t think they had their fresh legs tonight,” he furthered.

Despite an off-night, the Tropa still managed to put up a fight. They gave the Barangay a major scare after closing to within just two points, 70-72, following a Castro lay-up with 5:41 remaining in the game.

Pringle, however, made both of his charities shortly after, and Tenorio followed it up with a jumper to widen Ginebra’s lead once more. Aguilar and Scottie Thompson would join the fray to apply the finishing touches in the win.

The Tropang Giga absorbed their second loss in a row and dropped to 6-3. They will have a chance to snap their skid immediately versus the streaking Meralco Bolts on Saturday, Nov. 7, at 6:45 p.m.