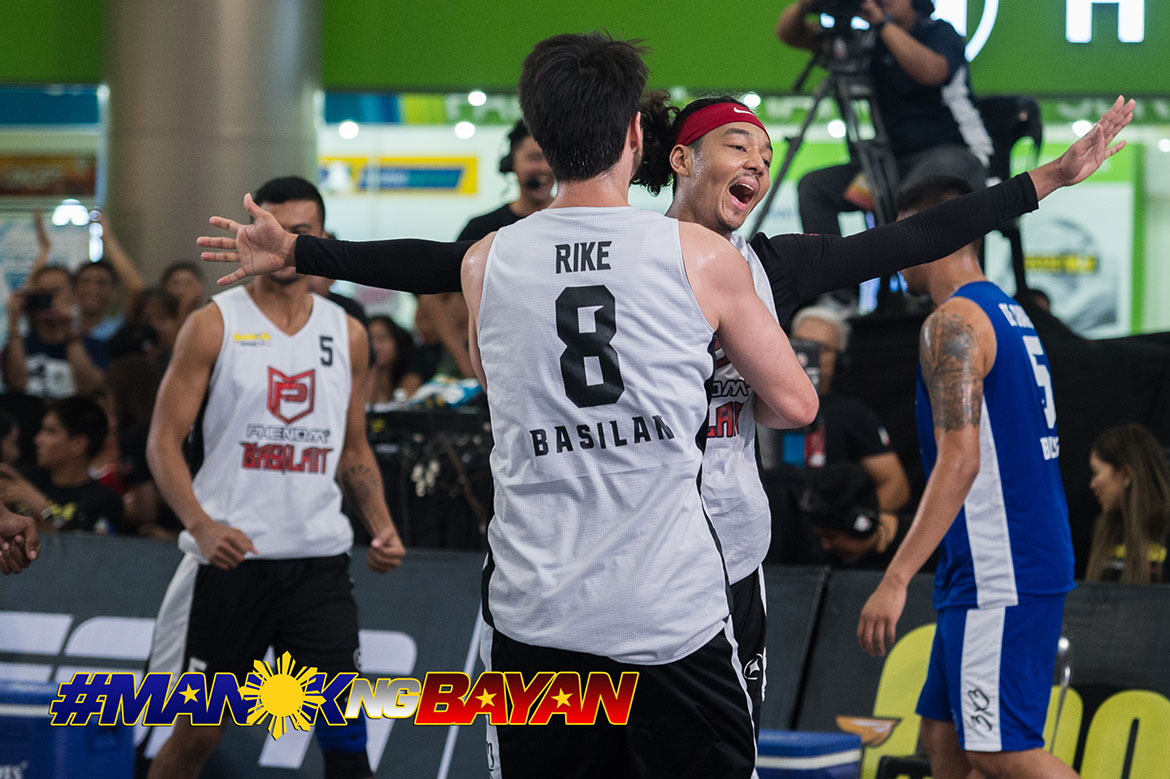 Victory was so sweet for the Phenom-Basilan Steel in the 2019 Chooks-to-Go Pilipinas 3×3 Patriot’s Cup presented by Coca-Cola, Saturday afternoon.

After suffering two heartbreaking Finals losses in the first two legs, Phenom-Basilan finally won the big one, taking down the Wilkins Balanga Pure, 21-16 (1:36), in the finale of the league’s third stop held at the SM Center Muntinlupa.

“We deserve this,” said Franky Johnson as Phenom-Basilan lost to Gold’s Gym-Pasig in the finale of the first leg, 15-21, and falling to VetHealth-Delhi in the last stage of the second leg, 20-21 (3:36).

“We did this for the whole province of Basilan. That’s our goal, to redefine Basilan,” he added.

Facing a squad that was just with them in China last week for the Haining Challenger in Wilkins-Balanga, the finale was as close as they come as the game was deadlocked four times.

Marcus Hammonds broke a 13-all tie with an and-one followed by a Troy Rike basket.

Alvin Pasaol and Franky Johnson then exchanged deuces but costly misses by Pasaol from the foul stripe and another bucket by Rike with 1:50 remaining extended the Steel’s cushion to four.

Karl Dehesa was able to score on a quick lay-up for Balanga with 1:44 left but Johnson knocked down the championship-sealing deuce eight seconds later.

Johnson had nine points in the finals while Hammonds added seven markers.

Pending Pasig’s finish in the 2019 Poitiers Challenger, Basilan rose to the top of the table with 260 points while Wilkins Balanga sits at third with 210. The Steel also pocketed PHP 100,000 for winning the leg.

Troy Rike scored eight points in the game, including the game-winning deuce.

“Tough. Really tough for us. I think we didn’t really know until yesterday that Roosevelt [Adams] wasn’t really playing for sure,” recalled Rike as Adams, who was replaced by Gab Dagangon, was nursing a right hamstring injury. “We had to come together, and we knew that we were missing some three-point shooting so I knew that going in.”

VetHealth-Delhi remained at second with 230 points.

In the Coca-Cola side events, David Carlos from guest team Gold’s Gym Muntinlupa and VetHealth-Delhi’s Kiran Shastri retained their crowns in the Slam Dunk Contest and Two-point Shootout, respectively.

The penultimate leg of the Patriot’s Cup takes place on Saturday, July 13 at the SM Megamall Events Center.