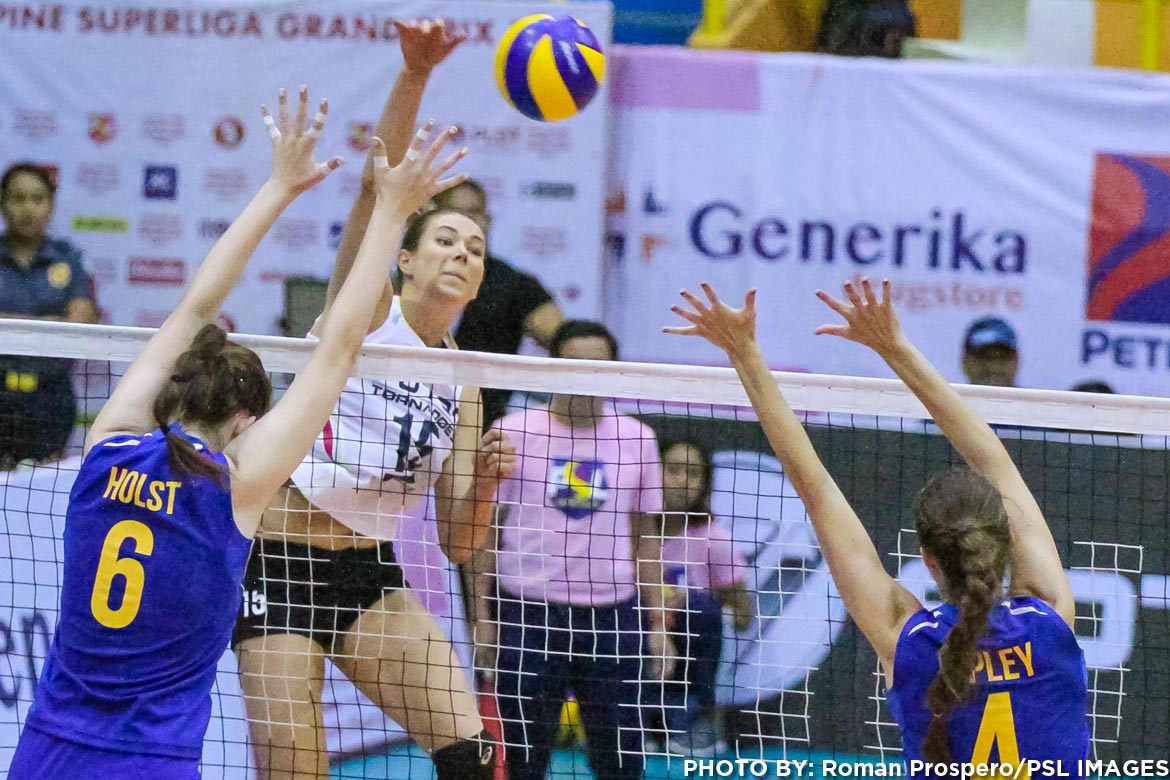 RC Cola-Army was out to prove their dynasty was not over. However, the Foton Tornadoes were out to solidify their own PSL kingdom.

The Tornadoes kept their season alive, clawing their way back from a huge deficit to escape with a nail-biting 23-25, 23-25, 25-22, 25-15, 15-7 victory over the winningest team in local volleyballl, the Lady Troopers in the semifinals of the Philippine Superliga Grand Prix Saturday at the Ibalong Centrum for Recreation in Legazpi, Albay.

The Tornadoes brushed off a rusty start before Ariel Usher buckled down to business to spearhead the Tornadoes back to the Finals.

The Portland-native delivered the crucial hits, including the booming attack from the right flank that put an exclamation mark to the marathon that lasted for two hours and 37 minutes.

The Tornadoes will face the winner of the other semifinal pairing between F2 Logistics and Petron in a best-of-three finals affair when the league resumes on Thursday at the FilOil Flying V Centre in San Juan.

Usher was a force to be reckoned with in the third and fourth sets as she erupted for 15 kills, five blocks and two aces for a total of 22 points. This came after the Tornadoe started the game on the wrong foot, allowing the Lady Troopers to seize control and gain early momentum.

Jaja Santiago finished with 17 points while reigning MVP Lindsay Stalzer had 14 hits, much to the delight of Foton coach Moro Branislav who earlier tagged this semifinal showdown as the “real battle” among four of the best club teams in the country today.

#ReadMore  Only one will remain unbeaten

“I’m happy for my team that they finished strong for us to enter in the finals,” said the Serbian coach, who is looking to steer the Tornadoes back to the AVC Asian Women’s Club Championship that will be held at Kazakhstan next year.

“RC Cola-Army is such a difficult team to beat. They always play good when they know they’re in a big battle. I have high respect for this team.”

True enough, what was tipped to be a cakewalk for the top seed Tornadoes turned into a full-blown war as the Lady Troopers showed up prepared and ready to pull off an earthshaking upset.

RC Cola-Army took control of the first two sets before threatening as they knotted the count at 18 in the third frame. But Usher responded with three straight kills as Foton gained the set point, 24-21, to stretch the match into another set.

It was an all-Foton show from there as RC Cola-Army ran out of gas for a 15-25 setback in the fourth set. The Lady Troopers regrouped and tried to mount a rally in the deciding set with a 5-8 deficit, but Santiago and Usher waxed hot anew to seal the victory.

Army import Kierra Holst nailed 24 of her 26 points off kills while Jovelyn Gonzaga and Honey Royse Tubino submitted 18 and 15 markers, respectively, for the Lady Troopers, who will vie for the bronze medal against the loser in the F2 Logistics-Petron encounter.