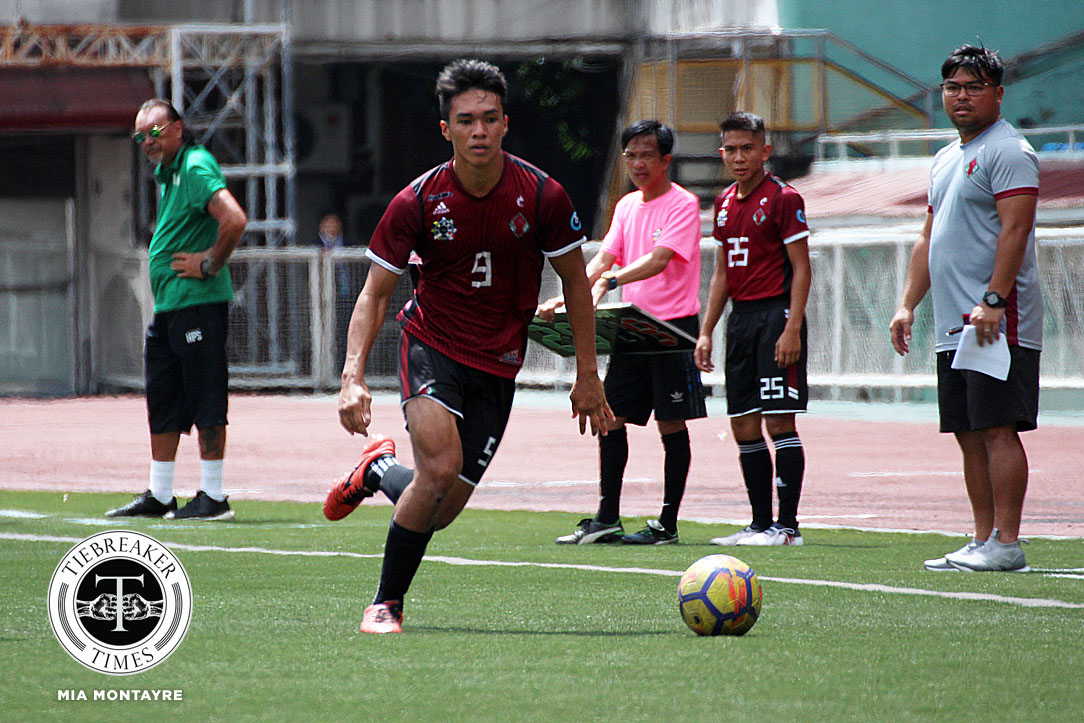 Not even being a man down can hamper the University of the Philippines Fighting Maroons’ dominance.

The defending champions’ character and grit were on full show as they managed to clinch an impressive 2-1 victory over the Ateneo de Manila University Blue Eagles, Sunday morning at the Far Eastern University-Diliman field in Quezon City.

Living up to its billing as the Battle of Katipunan, it was an incident-filled first period for the contest. Christian Lapas saw his morning end abruptly because of his ejection due to two yellow cards at the 39th minute but the Blue Eagles failed to make the numerical advantage count.

“Those are unforgivable actions. (Lapas) should have learned from the first time. He committed the same infractions. He’s a national team player. He should be more matured than that,” explained UP coach Anto Gonzales.

A good offensive play by the Fighting Maroons yielded a penalty after JB Borlongan’s shot hit the hand of one of the Blue Eagles. Daniel Saavedra then stepped up to take the spot-kick and he shot past Ateneo goalkeeper Jae Arcilla three minutes before the halftime break.

When the game resumed, Gonzales’ men found a way to double their advantage. An uncharacteristic defensive miscue by the Ateneo backline allowed UP skipper Kintaro Miyagi a free run at goal and he easily put the ball at the back of the net at the 49th minute.

A lifeline then arrived for Ateneo when the referee awarded the Blue Eagles an indirect free kick because of State U goalie Anton Yared’s time wasting. Substitute striker Rupert Baña then rebounded Jarvey Gayoso’s attempt at the 80th minute to pull one back for Jay Pee Merida’s men.

With only a few minutes left on the clock, Ateneo was awarded a freekick deep in the UP half. That incident incensed the Fighting Maroons so much that Gonzales was ejected for his protestations. However, that was as good as it got for Ateneo as UP managed to hold on and take home the bragging rights alongside all three points in the first round of this year’s Battle of Katipunan.

“That’s expected from them. They are experienced players. We have a lot of senior players, players who played in the national team. We weren’t really concerned even with a man down. But the key thing really is we have to execute. That’s the key point from today’s game,” concluded Gonzales.

Both schools’ next games shall be on March 7, 2019, at FEU-Diliman. State U (6 points) takes on De La Salle University at 9:00 AM while Ateneo (1 point) faces University of Santo Tomas later in the afternoon at 3:00 PM.