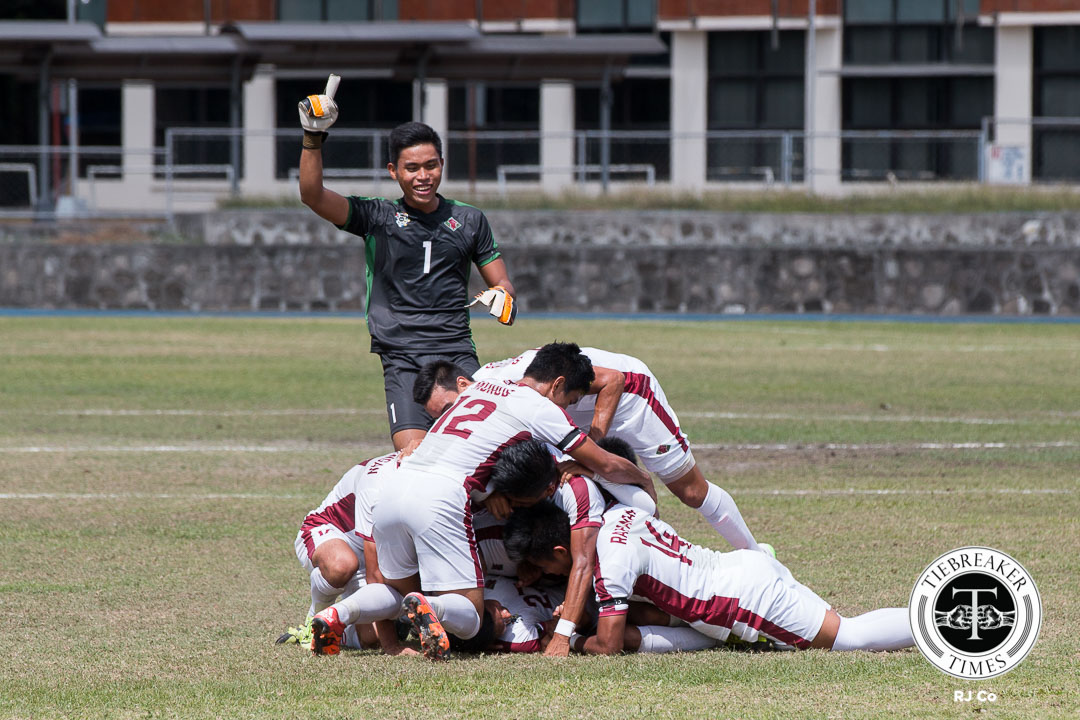 Thanks to a Kyle Magdato goal, the UP Fighting Maroons deservedly earned a much-needed 1-0 win over neighbors Ateneo Blue Eagles at the Moro Lorenzo Football Field in Ateneo. It marked a second consecutive win for the Fighting Maroons while handing their adversaries a third loss in four outings.

Both teams entered the match on the back of triumphs, albeit coming against inferior teams. A win for either side would definitely boost their campaign following a slow start to the season.

Between the two traditional powerhouses of UAAP football, it was the visiting team who controlled the whole first half. The Maroons created all but one of the chances in the period. The start wasn’t the liveliest but UP looked comfortable with possession. Whenever Ateneo acquired the ball, they would eventually relinquish it to their opponents.

The first clear chance of the game unsurprisingly came from UP. Ian Clarino launched a free kick that was palmed away by JP Oracion at the seventh minute mark. The Ateneans were able to claim a free kick four minutes after that, but Jeremiah Rocha couldn’t get a meaningful touch from Mikko Mabanag’s delivery.

Starved of possession for most of the opening period, the hosts were forced to play behind the ball. UP weren’t able to make the most of it right away but they slowly gathered momentum leading to the opening goal. Their crosses and plays looked promising, but the tall Ateneo defense managed to keep them quiet for almost 30 minutes.

UP’s patience paid off when they first broke the home squad’s resistance a minute before the half hour mark. Raphael Resuma shrugged his marker before striking the ball. His shot hit the woodwork but fortunately for UP, Magdato managed to get to the ball before anyone else to put State U in front.

The goal only galvanized the Fighting Maroons, who ended the half even stronger and were quite unfortunate to not go two goals ahead. Daniel Gadia made two chances within the next 10 minutes, but both were squandered. Clarino saw his header cleared off the line three minutes before the break, while Resuma missed the target when he was set up by Gadia at the last minute of added time.

After the interval, the Fighting Maroons kept themselves on top of the game. Chances were fewer. but a majority still fell in favor of the visitors. Nine minutes into the second half, Clarino had his shot stopped by Oracion. The Fighting Maroons retained the ball but Muros fired his shot way high. Moments later, the Ateneo goalkeeper had to be replaced by Kenneth James after picking up an injury.

The deputy goalkeeper may not have played a lot of minutes but he still had to deal with plenty. The UP offense bombarded Ateneo with shots, although many of them were routinely gathered. Once UP’s pressure waned, the Ateneans went on to create some chances. At the 65th minute, fullback Carli Mathay attempted to catch the Maroons’ defense off guard, but he wasn’t able to keep the ball while getting past a trio of UP defenders. A minute after, Mabanag’s free kick found Xavier Alcuaz who didn’t get go guide the ball on target.

On the other side of the pitch, substitute Miggy Clarino displayed aggressiveness to score what could be an insurance goal. He created two opportunities for himself in the latter stages of the second half. On both occasions, however, James dealt with it well enough.

UP still controlled the tempo towards the end but Ateneo finally had the openings they were craving. Five minutes from time, a wonderful chance was presented to the Blue Eagles as Jarvey Gayoso slid a fine pass to Mabanag. But the winger was beaten to the ball by Ace Villanueva. Four minutes before time, another chance went begging for the Blue Eagles. Unmarked, Carlo Liay nearly met Mabanag’s free kick in mid-air, but he timed his jump a bit later than he had hoped. It proved to be the best chance for Ateneo to level the score, something that they were unable to take. Time expired soon after, confirming a second straight win for the Fighting Maroons.

After the match, UP Coach Anto Gonzales hailed his team, particularly for how they played in what he described as a fantastic first half. “Tactically, all aspects of the game we controlled in the first half,” he concluded. A huge part of it was due to the team’s ability to dictate the pace and also staying intact to prevent Ateneo from playing their game. As the season progresses, Gonzales is seeking improvement in pressure and making the most of their chances.

With the result, UP now move to third place with seven points to their tally. Ateneo, meanwhile, stay in sixth place with only a lone win after four games of play.

The two teams will return to action on Sunday, with the UP Fighting Maroons looking for their third straight win of the campaign against the lowly Adamson Soaring Falcons at 7PM. Meanwhile, Ateneo will look to go back to winning ways when they take on the NU Bulldogs in what looks like an interesting battle between two teams coming off painful losses. That game will kick off at 1PM. Both games will be staged at the McKinley Hill Stadium.