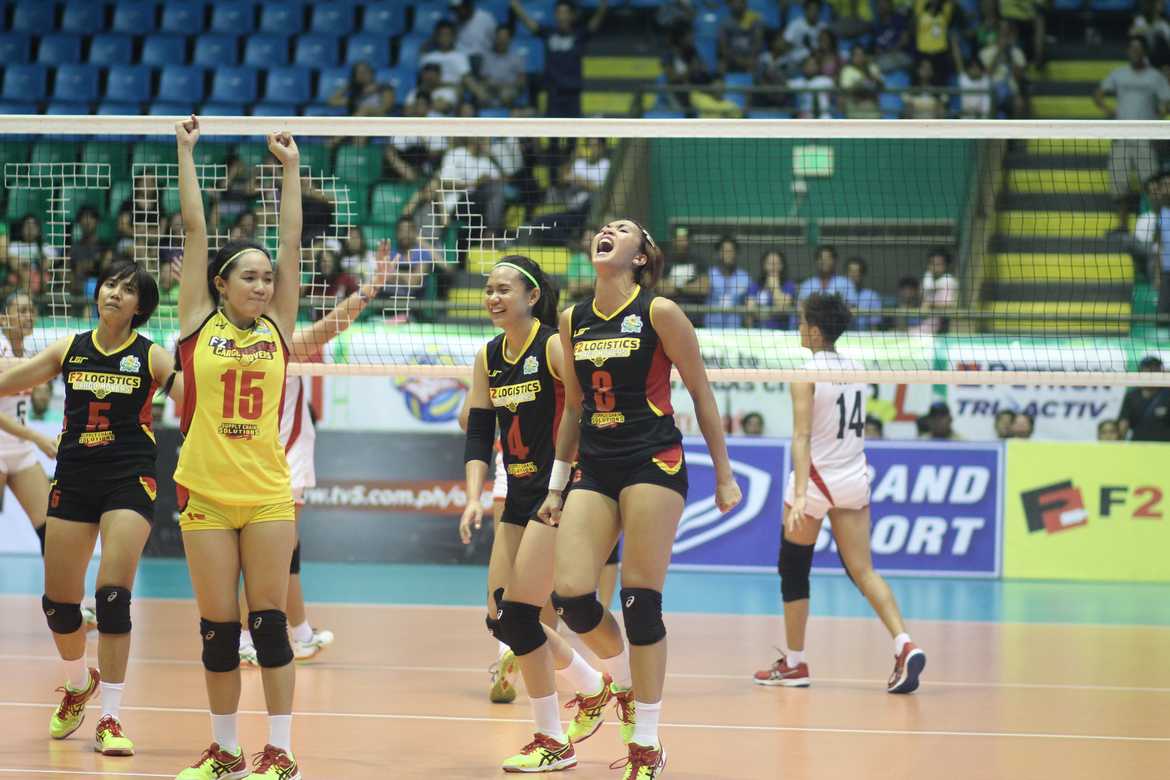 It was a virtual do-or-die game for the F2 Logistics Cargo Movers and the Cignal HD Spikers.

Leading by just two points midway through the opening set, 12-10, the Cargo Movers quickly blasted the HD Spikers with a huge rally through Cha Cruz and Danika Gendrauli and extended their lead to 20-13. Errors by Cignal compounded their problem, while Pau Soriano was able to score on a light tip and a huge spike to take the first set 25-18.

It was more of the same in the second set, as the Cignal HD Spikers faltered midway. A one-handed single block by Cruz gave F2 Logistics a 17-12 lead, while kills by Paneng Mercado and errors by Cignal gave the Cargo Movers a two-sets-to-none lead.

Up two sets, the Cargo Movers did not display the same vigor they had in the third set. Four straight points by Cignal in the early-goings of the game gave them a 5-2 edge early on. Slowly, F2 Logistics were able to bounce back. Cha Cruz carried her team once more to cut the lead to just two points, 13-11. Errors by Cignal and a great kill by Mercado over two defenders eventually tied the game at 16-all. The two teams exchanged points that saw both teams tied at 21-all. However, Cignal started a block party via the CSB duo of Jeanette Panaga and Jannine Navarro to give the HD Spikers the middle set, 25-21.

A fired-up F2 Logistics squad came out in the fourth inning. With a 10-9 lead, the Cargo Movers went on a 5-0 run to extend their lead to six behind two consecutive aces by Mercado. The lead balooned to nine, 20-11, afterwards. Cignal though fought back behind the Charfrontline of Rapril Aguilar and Navarro to eventually cut the lead to just three, 22-19. However, the lead proved to be too much. Setter Janet Serafica scored on a drop at the second ball, while an error gave the Cargo Movers set point. A powerful running spike by Aby Marano ended the game, 25-22.

Cruz admitted that she had been confident that even if they had dropped the third set, they would win the game. “Yung feeling namin sa loob hindi kami matatalo. Ganda ng chemistry sa loob ngayon, maganda yung teamwork,” she shared.

Cruz led all scorers with 20 points, 15 off of attacks, three aces, and two block kills. Mercado, Soriano, and Gendrauli rounded out the Cargo Movers, as they recorded double-digit scores with 13, 12, and 11 points respectively.