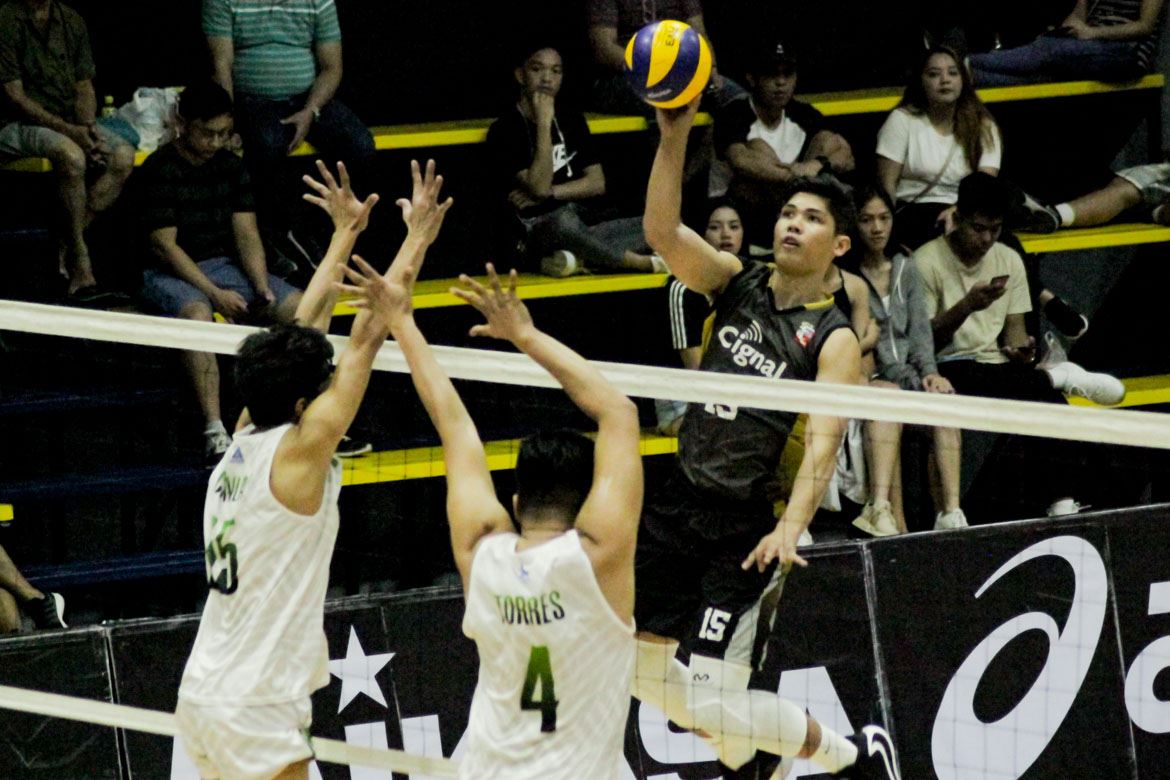 Espejo, who only entered the game in the second set, fired 16 hits for 20 points. Meanwhile, Marasigan supplied 17 markers founded on 13 attacks and four blocks to propel the HD Spikers to a 2-0 standing in Group A.

Edmar Bonono and Wendel Miguel continued to be a consistent force on offense, finishing with 14 and 12 points, respectively. Vince Mangulabnan steered the HD Spikers’ attack with 28 excellent sets.

Still, despite their dominance in the first two sets, the HD Spikers had to go through a rough third frame to get the victory.

Espejo led Cignal to a 34-33 advantage in the set which lasted for 39 minutes, but an attack error coming from the latter locked the scores once again. Things then got worse when Marasigan committed the same mistake in the ensuing play. John Mark Castillo blocked Espejo to avoid a sweep from the HD Spikers.

Cignal then regained their bearings in the ensuing frame, going on to lead by as much as seven points to douse off the Volley Masters’ uprising.

Mac Millete was the lone double-digit scorer with 10 points for IEM, who dropped to an even 1-1 record. 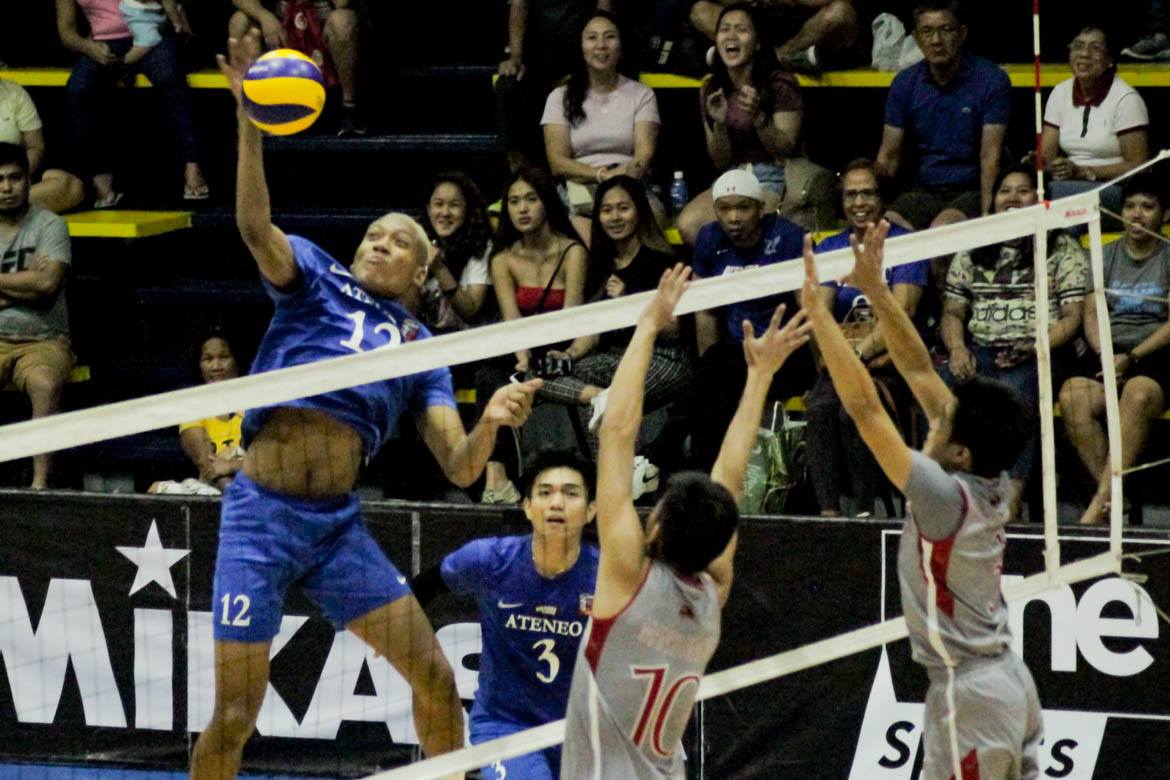 Looking to pick up steam, the debuting Ateneo de Manila University Blue Eagles got over a lackadaisical third set to edge the Lyceum of the Philippines University Pirates in four sets, 25-23, 25-20, 18-25, 25-16, in Group B.

After taking the first and second sets, Ateneo lost their footing and dropped the third frame with a seven-point margin. Luckily for Blue Eagles head coach Timothy Sto. Tomas, his wards embraced the game plan which eventually earned them the win.

Ron Medalla paced Ateneo with 15 points on 13 attacks and two aces. Meanwhile, Kurt Aguilar finished with nine hits, four blocks, and an ace for 14 points to go along with 10 excellent digs to lead the Blue Eagles to victory.

Chumason Njigha proved to be a force above the net with four blocks for 13 markers. On the other hand, Lance De Castro patrolled the floor with 16 excellent digs and 15 receptions.

Ateneo team captain Egie Magadia dished out 21 excellent sets to go along with two points in the win.

LPU, who fell to a 0-3 standing, were led by Juvic Colonia and Eddsel Borres with 12 and 11 points, respectively. 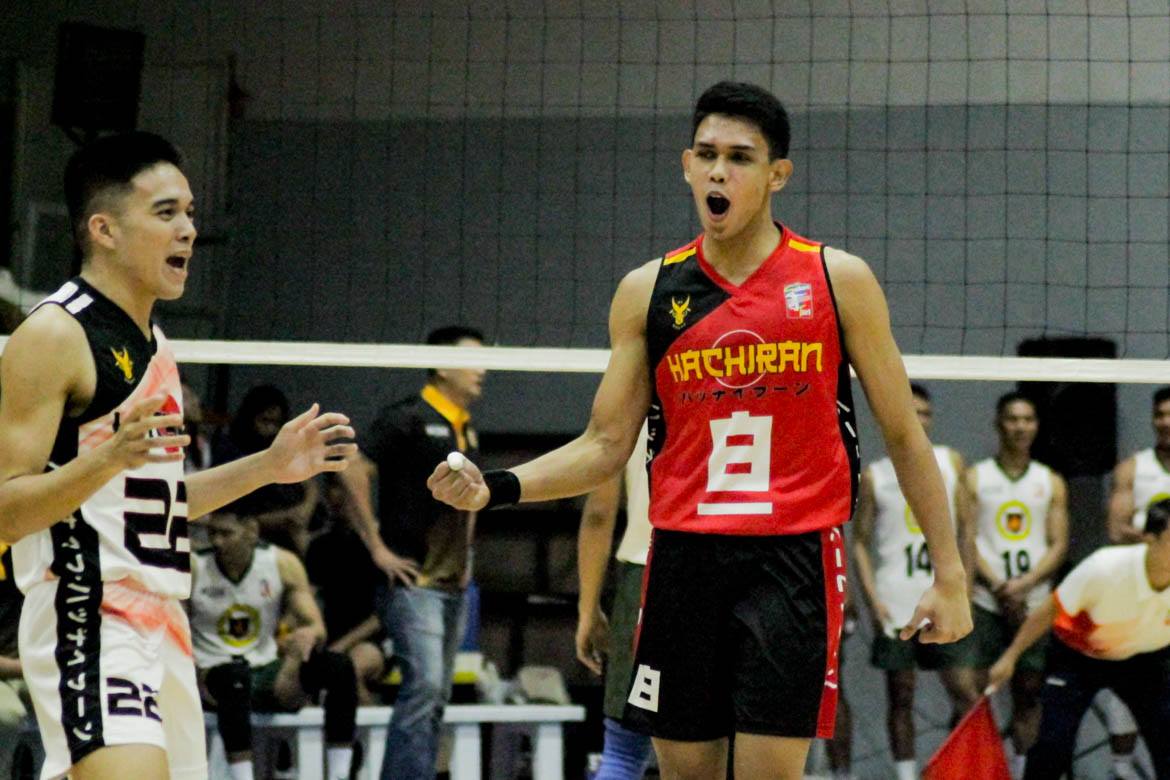 Coming from a tough loss against Perpetual on their debut, the Hachiran-Far Eastern University Tamaraws vented their ire on the BCDA-Army Troopers, 27-25, 25-16, 25-19, in the final game of the evening.

Siblings JP and Martin Bugaoan combined for 23 markers. The former also tallied 13 points built on 10 attacks, two blocks, and an ace, while the latter spiked nine hits for 10 markers.

FEU improved to an even 1-1 card in Group C.

Jude Garcia, who came into the match in the latter part of the third set, scored three of the last four points for FEU.

Kevin Liberato had 11 points, while Benjaylo Labide finished with 10 in a losing cause for the Troopers, who spiraled down to 0-4.