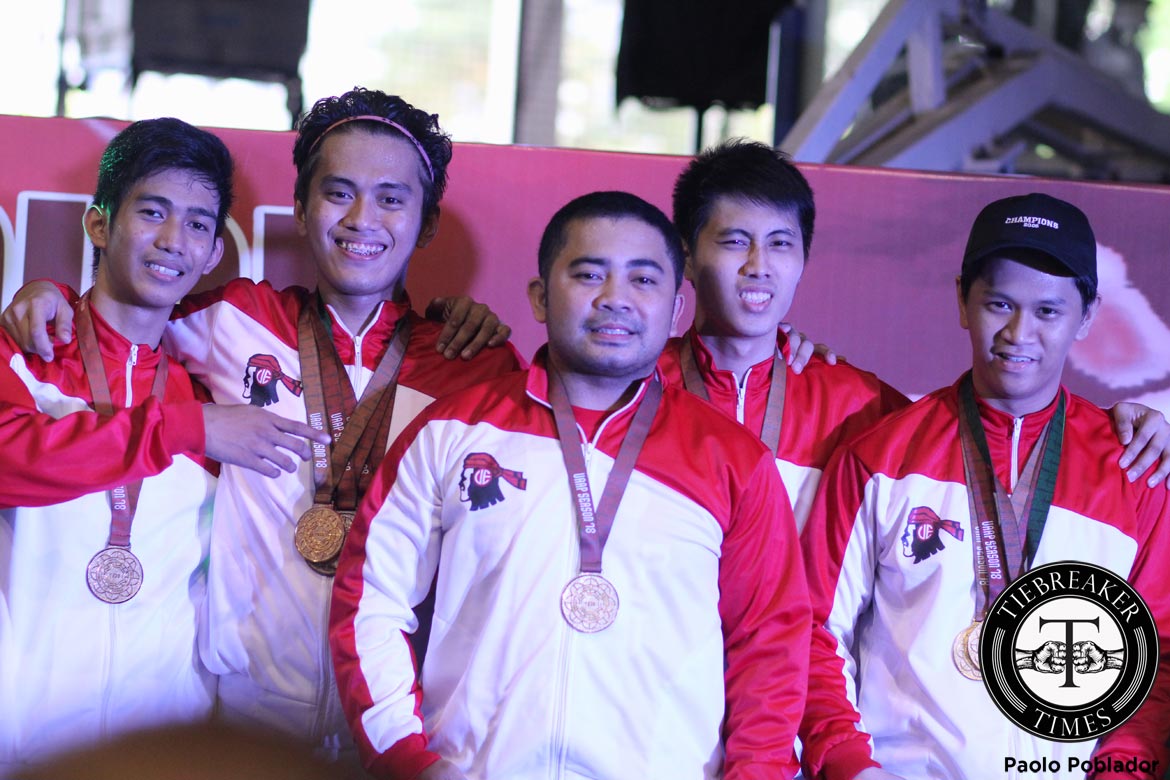 It’s not how you start, it’s how you finish.

Despite the struggles and some failed attempts to keep a clean slate, the University of the East Red Warriors closed out the season in strong fashion after upending University of the Philippines Fighting Maroons, 45-27, in the Final, Saturday at the Blue Eagle Gym.

The two best men’s foil ensembles of the UAAP carved out similar journeys towards their anticipated rematch. It should be noted that the individual players of UP and UE topped the single-play event in pools and direct eliminations, respectively. The support cast could also not be taken for granted. Igi Cui and JC Turano led the strong team for the Maroons with epee individual fencers, Armstrong Tibay and Apa Rondain, completing the cast. On the other hand, the 1-2 finishers in the individual event of the weapon, Michael Nicanor and Nathaniel Perez, had Samuel Tranquilan and Kenneth Paraso to back them up.

As expected, the strong UP squad emerged victorious against the De La Salle University Green Fencers, 45-34. The Maroons shook off the challenge of La Salle’s first-year foilist and national team mainstay, Towie Licono, to slowly control the match. Licono attempted to single-handedly carry DLSU, but time sided with Rondain, stopping any run the former had made. Cui, Rondain, and anchor Turano then dealt with the the opposition to take the match and the Final ticket.

Similarly, the UE Red Warriors hardly broke a sweat in their match against the University of Santo Tomas Tiger Fencers. The Recto-based squad allowed their counterparts a maximum of 3 points in each of the bouts they played. The match ended in a landslide win at 45-16.

In the Final, both teams stood their ground and proved their worth in the Final podium. UE first took the upper hand, before UP wrestled the lead through the efforts of graduating veteran Turano. It was, however, the use of last year’s Rookie of the Year, Tibay, that proved a crucial decision and played a big part in this gold medal match. The young upstart held his own in his first bout against none other than the individual gold medallist, Nicanor, to keep the Maroons in the lead.

Nonetheless, Tranquilan and Perez took advantage of Tibay’s inexperience with the weapon in a UAAP event to pull away. Turano and Rondain tried to bail the sophomore and the team out, but the lead was huge enough for the Warriors to, surprisingly, end the match with relative ease.

This gold-medal finish of the Warriors sealed another chapter in the budding rivalry of the two men’s foil teams. Moreover, the title in this event left no doubts of UE’s dominance in UAAP men’s fencing as they ended one gold medal ahead of UST, and with eight medals in total.

The win also clinched the school’s fourth consecutive title – a feat that no other school has ever accomplished. And there is no one as proud as graduating senior and Most Valuable Player awardee, Michael Nicanor. For him their hardwork had paid off as he said, “Syempre po, masaya [ako] kasi pinag-training-an naman namin to ng maigi talaga. Lunes hanggang Linggo may training kami.” Despite winning the MVP plum, Nicanor believed that it was team effort and shared his award to his teammates. Admittedly, winning the MVP surprised the national team mainstay. Nicanor said, “Hindi ko talaga siya inaasahan, kasi malalakas din yung teammates ko. Pero nagpapasalamat din ako na nakuha ko itong award.”

Nicanor even thought he could not return to the piste after he went down on severe cramps after the awarding last Thursday. He shared, “Kala ko made-deads na ko.” But he pulled through, participated, and won everything for UE.

#ReadMore  Gesmundo strikes out 13 in La Salle win over UST

A courageous hero remained true to the goal with the whole army behind him. In the end, a reward came to the Red Warriors by way of their fourth straight UAAP men’s fencing plum 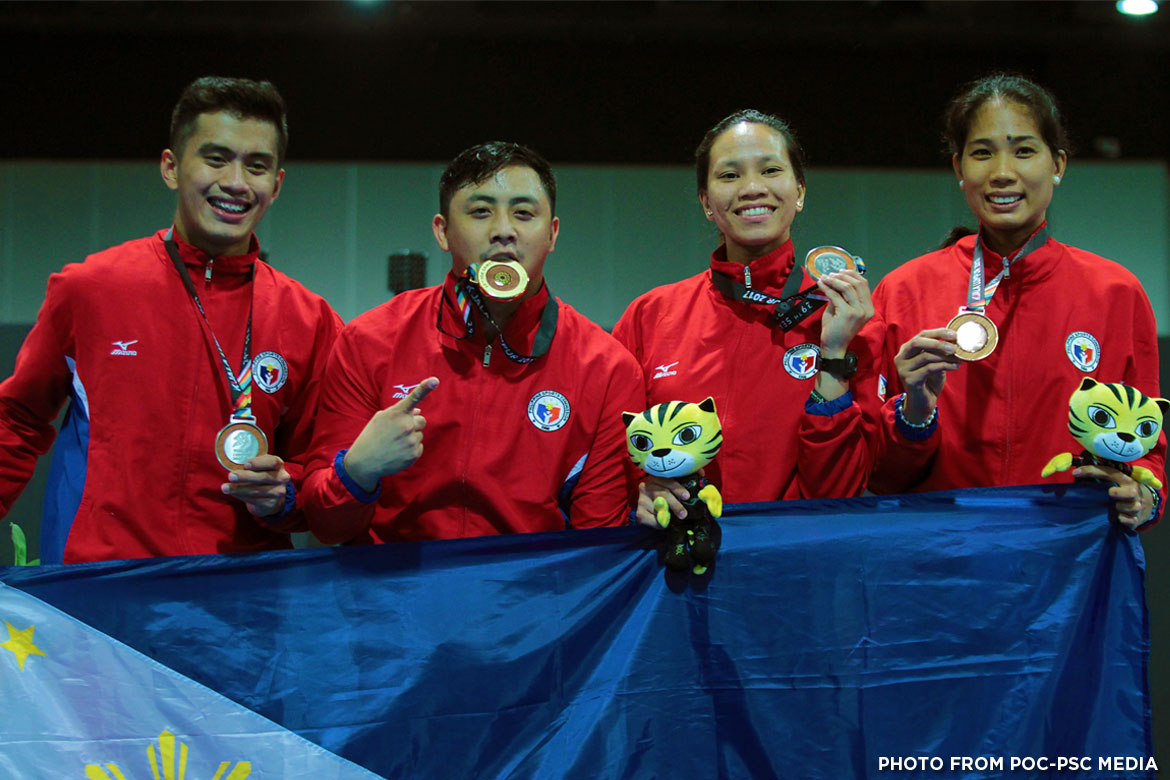 The much-coveted gold medal remains elusive for the Philippine National Fencing Team. This, as Hanniel Abella settled for silver in the women’s individual epeè... 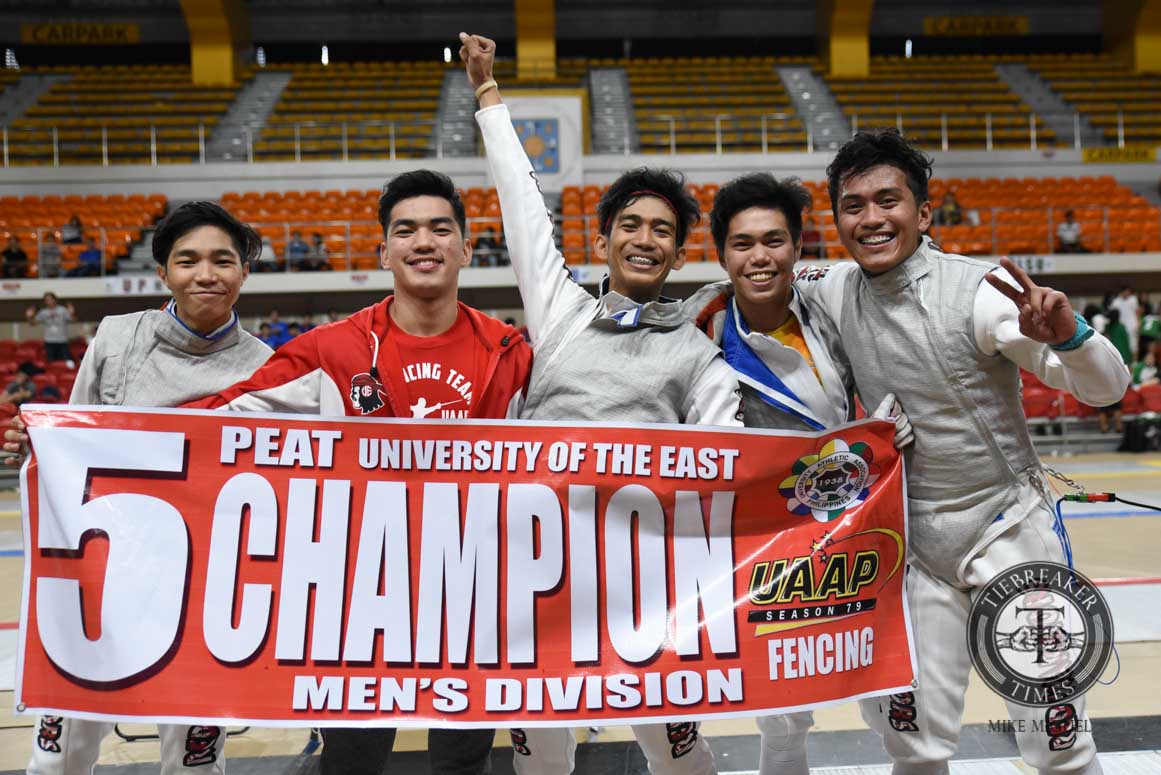 When the dust cleared, the Red and White still remained as kings. After getting two of the three gold medals in the three-men play...