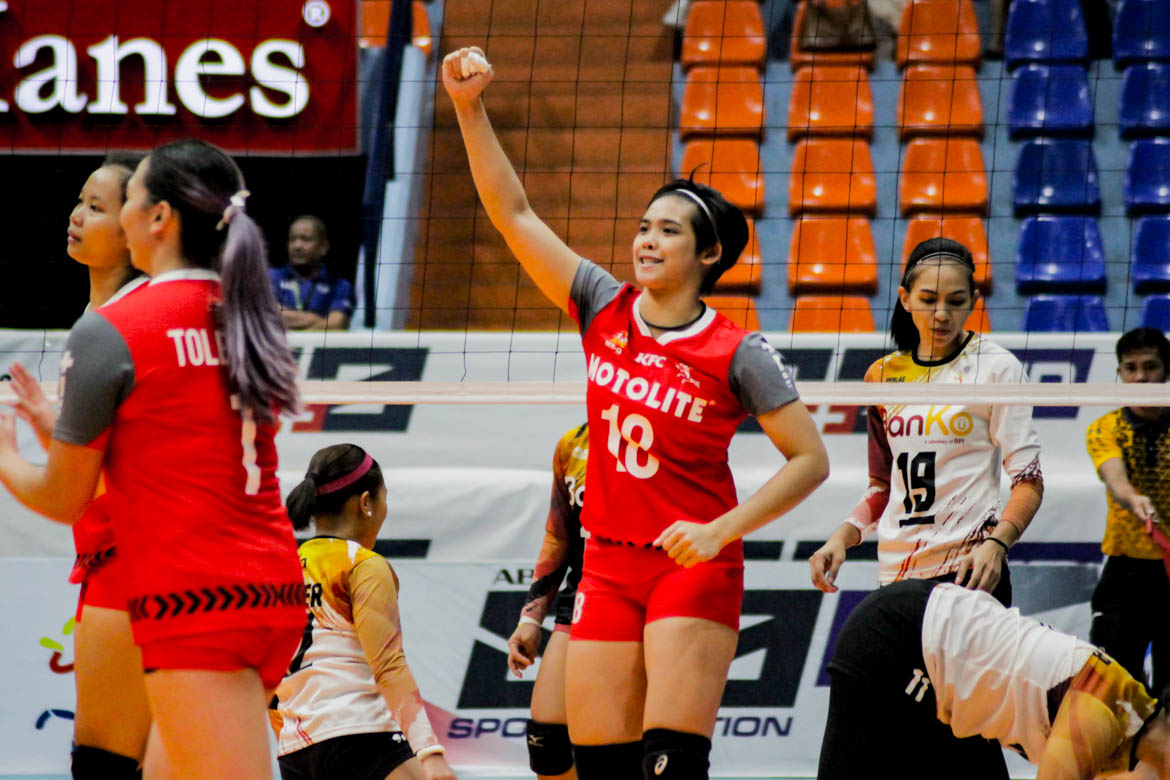 Without ace spiker Myla Pablo, Motolite played inspired volleyball on Wednesday night, leaning on the UP tandem of Tots Carlos and Isa Molde.

Carlos erupted for 29 points built on 26 attacks and a pair of aces. Meanwhile, Molde supplied 24 markers — off of 21 attacks — laced with 18 excellent digs.

The UP pair connived in the decisive fifth frame, keeping their team afloat when the Perlas Spikers wriggled past a 6-all deadlock and sprinted to an 11-8 cushion.

Carlos instigated the fightback, then Molde followed with the differential hits that put Motolite on top, 13-12. After a back-and-forth between Molde and Nicole Tiamzon, Kathy Bersola went for a running attack that forged a deuce.

From there, the Perlas Spikers and Motolite exchanged crucial attacks. Deadlock after deadlock ensued, before Roces misfired, shattering a 17-all lock.

Gervacio then tried to keep the fire alive for Perlas Spikers with an attack. Marist Layug met her at the top to seal the deal for Motolite.

Bernadette Flora also stepped up in lieu of Pablo. She scattered 17 points spiked by four aces, to go along with 18 excellent digs and 17 excellent receptions. Iris Tolenada churned out 34 excellent sets.

Motolite rise to joint second place with Petro Gazz with a 5-2 slate.

On the other hand, the Perlas Spikers fell to solo fourth with a 5-3 card to end their first round campaign.

Both Tiamzon and Gervacio had an offensive onslaught that all went down the drain. BanKo skipper Tiamzon topped her team with 24 points from 20 attacks and three kill blocks. Meanwhile, Gervacio poured in a triple-double of 21 markers on top of 16 excellent receptions and 15 excellent digs.

Motolite look to end their first round campaign on a high note as they face the struggling Choco Mucho Flying Titans. On the other hand, BanKo open the second round against the Bali Pure Purest Water Defenders. Both matches will be played on Sunday at the same venue.