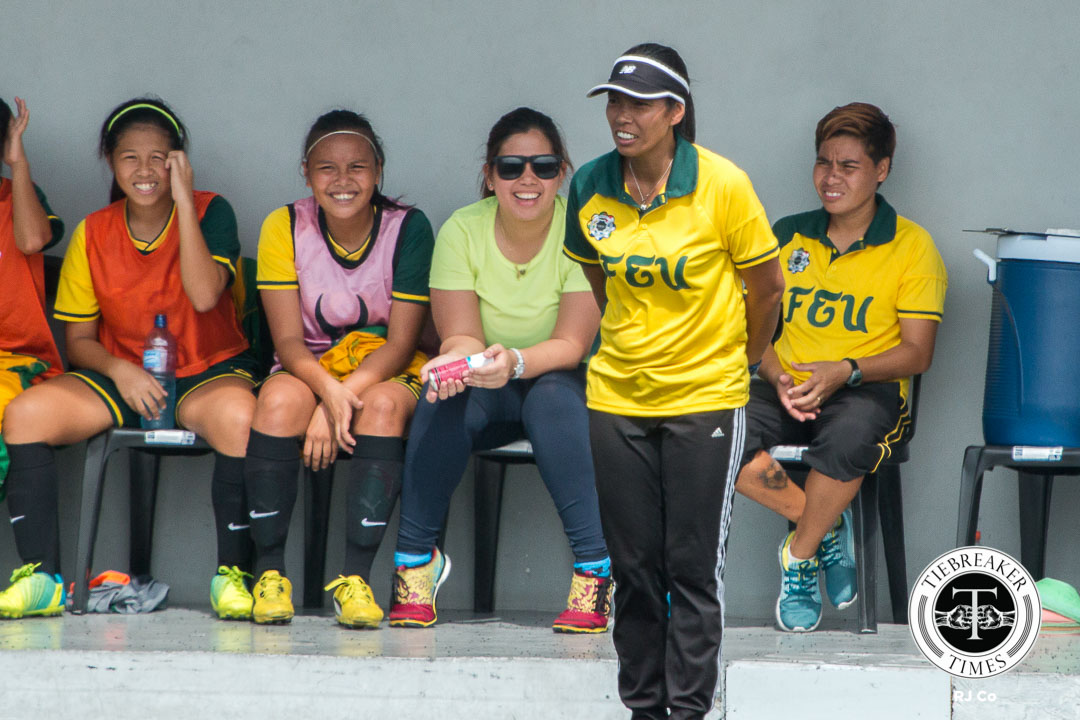 Having been champions for the past three seasons, the Far Eastern University Lady Tamaraws find themselves in unfamiliar surroundings: currently, they are the bottom team in UAAP women’s football. With her team the only one without a win in the tournament, FEU Coach Marnelli “Let” Dimzon chooses to be patient with her players, whom she hopes will step up their game as they approach the midway point of the season.

The team’s performances this season have been uncharacteristic, and the results have not failed to reflect such. Speaking after their 3-2 loss against UST last week, Dimzon identified two major problems regarding her team: inexperience and chemistry. In their latest game, FEU actually opened the scoring courtesy of Kim Cupal early in the second half. They then fell behind, but Jovelle Sudaria appeared to have salvaged a point for FEU. Her effort ended in vain as UST took all the points in the end. Assessing their performance, Dimzon pinpointed the team’s inability to keep themselves in tip top shape throughout the encounter.

“Bumibigay sila regarding sa fitness at saka dahil sa sobrang init so hindi nila kaya. Siguro dahil nga yung experience ng players hindi ganoon kataas. May mga players kaming naiwan pero hindi nila kayang i-sustain kung ano yung mayroon sila ngayon eh,” she cited. By ‘players left behind’, the FEU women’s football legend meant the few veterans eligible to play this season. The Lady Tamaraws are depleted this season, having lost a handful of key veterans due to graduation or suspension, among other reasons. Their absence has offered a chance for the rookies and fringe players to earn themselves spots in the starting eleven, but so far, no one has made the most of the opportunity.

#ReadMore  It’s all about points, not vengeance for suffering Global-Cebu

Aware of the issues regarding team chemistry, Dimzon works hand in hand with everyone to make sure they get through the tough times together. “Ako naintindiihan ko naman kasi bago yung players ko pero siyempre tina-try naming ayusin kung ano yung problem,” she stated. She admitted that they had sought counselling before last week’s defeat in order to determine areas of improvement.

Compared to the way they had played against La Salle, Dimzon noted a slight improvement in the attacking aspect of their game against UST. Yet ‘better’ is still not good enough for FEU, who struggled to cope with a very aggressive front line once again. “Masyadong loose ‘yung marking. Doon kami nabubutasan,” she identified. Conceding plenty of goals is an issue the Tamaraws cannot afford to have throughout the season. While capable of scoring on the other end, Dimzon’s championship teams always had sturdy defenses that enabled the offense to worry only about scoring.

The good thing for FEU is that they have six games left in the season to recover and make it back to the finals. For them to do that, she thinks it will boil down to how the players, especially the new ones, settle into games. “Iyong reading ng game. Yung adjustment nila masyadong mabagal,” Dimzon commented in reference to their performances so far. Definitely not the stuff of champions at the moment, but it would still take a fool to write off FEU this early in the season. In season 77, the Lady Tamaraws had been able to afford losing two games; this time, it may not be a problem for as long as they get back to winning ways as soon as possible.

The next challenge for FEU to return to their previous position at the top comes from the University of the Philippines. As FEU had fended them off to retain their crown, the Lady Maroons are eager to exact revenge by making the champions’ season more miserable.

The FEU-UP game always offers anxiety and ecstasy to players and fans alike, so it may be the perfect game for the Lady Tamaraws to get themselves back on track. Six points off the finals places, FEU may have fallen behind but time is still on their side to make sure the title goes nowhere else. The finals rematch will kick off tomorrow evening, 7PM at the McKinley Hill Stadium.