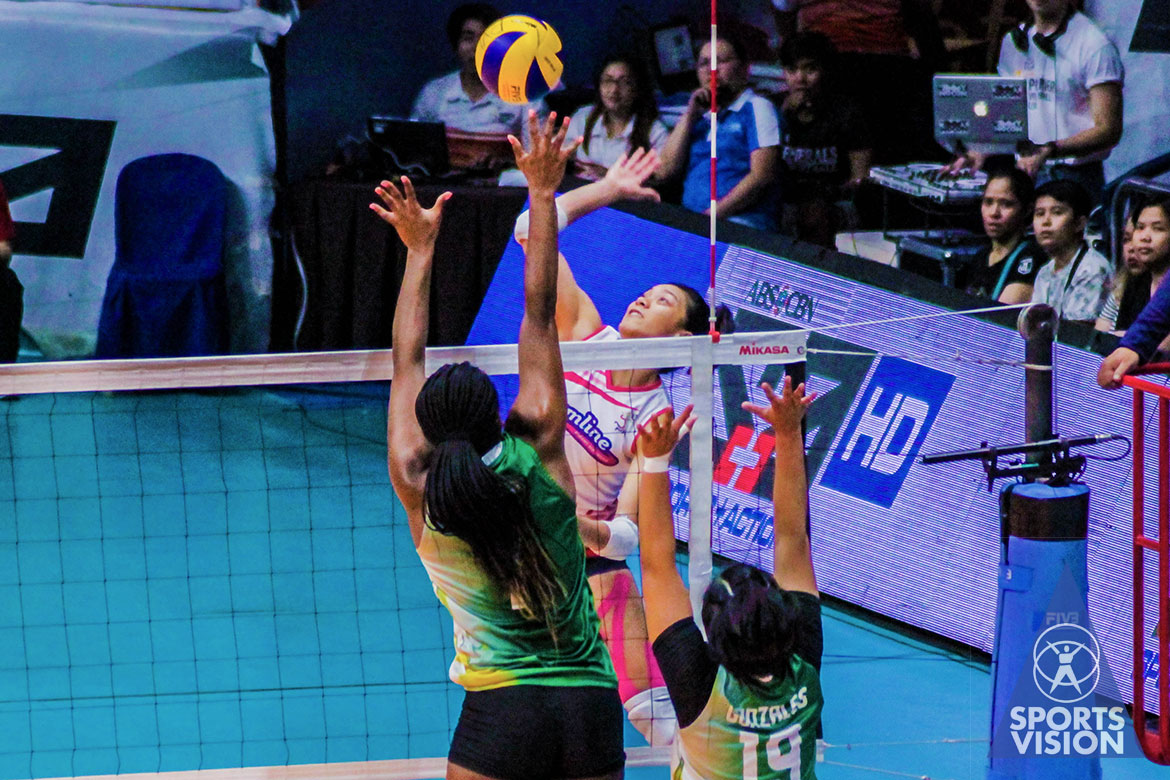 Fueled by their desire to return to the Finals, the Creamline Cool Smashers drew first blood versus the PacificTown-Army Lady Troopers, 26-24, 25-21, 23-25, 25-20, in the best-of-three semifinal series of the 2019 PVL Reinforced Conference, Wednesday afternoon at the FilOil Flying V Centre.

The defending champions are now a win away from returning to the Finals. Moreover, they have continued to sustain momentum, abridging their blistering streak from the elimination round to the next stage for a 10-game winning surge.

The relatively younger Creamline squad had momentum on its side coming into the match. Still, despite not having PacificTown-Army head coach Kungfu Reyes, the Lady Troopers made sure to turn it into a nip-and-tuck affair.

Save for the latter portion of the fourth frame, however, each of the first three sets came down to who had the stronger finishing kick.

Tied at 22 in the opening salvo, Kuttika Kaewpin broke the deadlock before Royse Tubino committed an error to put Creamline at set point. Though Olena Lymareva-Flink and Ging Balse-Pabayo forged a two-to-win situation, Kaewpin yet again gave her team the edge that paved the way for Creamline to take a set advantage after Flink squandered a scoring opportunity.

Another back-and-forth encounter ensued in the second frame that led to a 19-all knot. But the Cool Smashers’ set-clincher came in the form of another Kaewpin hit to cap a 6-2 run.

Playing with a sense of urgency, the Lady Troopers came out of the third set gates with guns blazing to hold a 19-11 cushion. However, a slew of costly errors laced with a couple of differential hits from Creamline allowed the Cool Smashers to claw back from an eight-point mire and bring the game back to square one at 22-all.

This time, though, it was PacificTown-Army that provided the clutch plays down the stretch to snatch a set.

Refusing to relinquish momentum, the Cool Smashers raced to a 23-17 gap through the collective efforts of Kaewpin, Alyssa Valdez and Aleoscar Blanco that doused the fire out of the Lady Troopers.

Lymareva-Flink topped the scoring chart, exploding for 31 points built on 25 attacks, four aces, and two blocks that went for naught.

Tubino chipped 14 points, all coming from attacks, for PacificTown-Army while Jenelle Jordan added 10 spiked by two blocks and two aces. Jovelyn Gonzaga only had four points but contributed heavily on the defensive end, notching 13 excellent digs and 11 excellent receptions.

Game Two will be played on Saturday, July 6 at the Ynares Center in Antipolo.