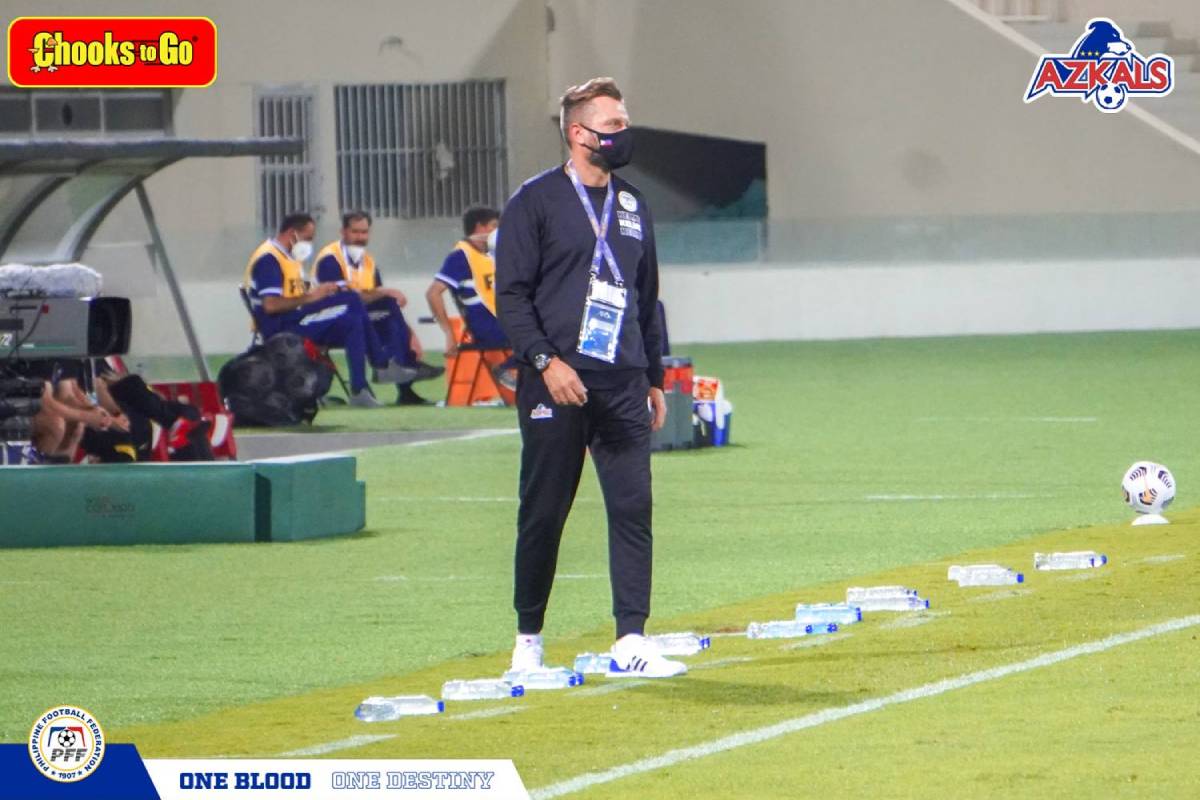 Nearly 20 minutes into their match against China Tuesday morning (Manila time), Philippine Azkals coach Scott Cooper saw his strategy fall into disarray after defender Michael Kempter was down on the floor nursing his nose, which was struck beforehand.

It was in the midst of the crucial match-up in the joint 2022 FIFA World Cup and 2023 AFC Asian Cup qualifiers, which the Azkals lost 0-2 at the Sharjah Stadium in the UAE, but it was that particular incident that left a sour taste in the 50-year-old mentor’s mouth because of how South Korean referee Kim Hee-gon handled it.

“In the first half, my left-back (Michael Kempter) had his nose broken and that doesn’t happen unless somebody breaks it. The linesman stood in front of him, the referee is in sight of him, he gets his nose broken. When I asked the referee about what did he find, how did his nose get broken, you know what the referee said to me,” alleges Cooper.

“He laughed at me and said, ‘Haha! He broke his own nose’. That’s what the referee said to me at halftime.”

With Kempter unable to carry on, veteran defender Martin Steuble was called upon to replace the debutant at the 21st minute.

Things then got worse when midfielder Kenshiro Daniels also had to be substituted at the 33rd minute for Jarvey Gayoso because of a hamstring injury. While amendments were made to allow teams to make a maximum of five substitutions, coaches can only call for changes three times during the game.

“Many decisions went to China but when you tell me at halftime ‘Haha, he broke his own nose’, I don’t think he should be refereeing for a long time because that clearly is an unacceptable behavior from an official to speak like that to a coach when all I asked him was ‘How did you think this happened,” furthered the concurrent Azkals Development Team instructor.

“The fourth official told me that he saw an arm go up, he couldn’t see the contact. But clearly, the player had his nose broken. So, I ask anyone here and, listen, the referee couldn’t deny it because there were four or five people with me at the same time, ‘Haha, he broke his own nose’.”

Cooper was visibly livid throughout the opening moments of the post-match press conference with his ire directed at Kim Hee-gon, who is a listed international referee by FIFA since 2013 and has officiated matches in prestigious competitions such as the AFC Champions League, AFC Cup, and AFF Suzuki Cup alongside international friendlies and qualifiers.

“I’m disgusted… I’m not making controversy. I’m stating what I heard the official say to four other people. It’s a despicable thing to say. I don’t know why he said it.”

The inability to change things as Cooper would have wanted then led to a dismal second half, which led to goals from Chinese forwards Wu Lei and Wu Xinghan at the 56th and 65th minutes respectively. The likes of midfielder Mark Winhoffer and Luke Woodland were brought in late into the contest for Carli De Murga and Mike Ott but the game was already lost by then.

“That makes the game very difficult because China has a very good bench,” lamented the Sheffield, England native. “They’re a very good team. So I think, all in all, China deserved to win the game but, for me, there’s a red card in the first half. It’s a clear red card and that changes the whole game. We showed again we could control China. We don’t give them many chances in the first half. We didn’t give them many chances so we could control them.

“We just lacked that little bit of fitness and it was one bad mistake that led to the penalty that opened the game up but we were comfortable. We were making chances… We have got nine or 10 players who were not here. I’m proud of my players. I think they did a very good job but (congratulations) to China, they deserved to win the game.”