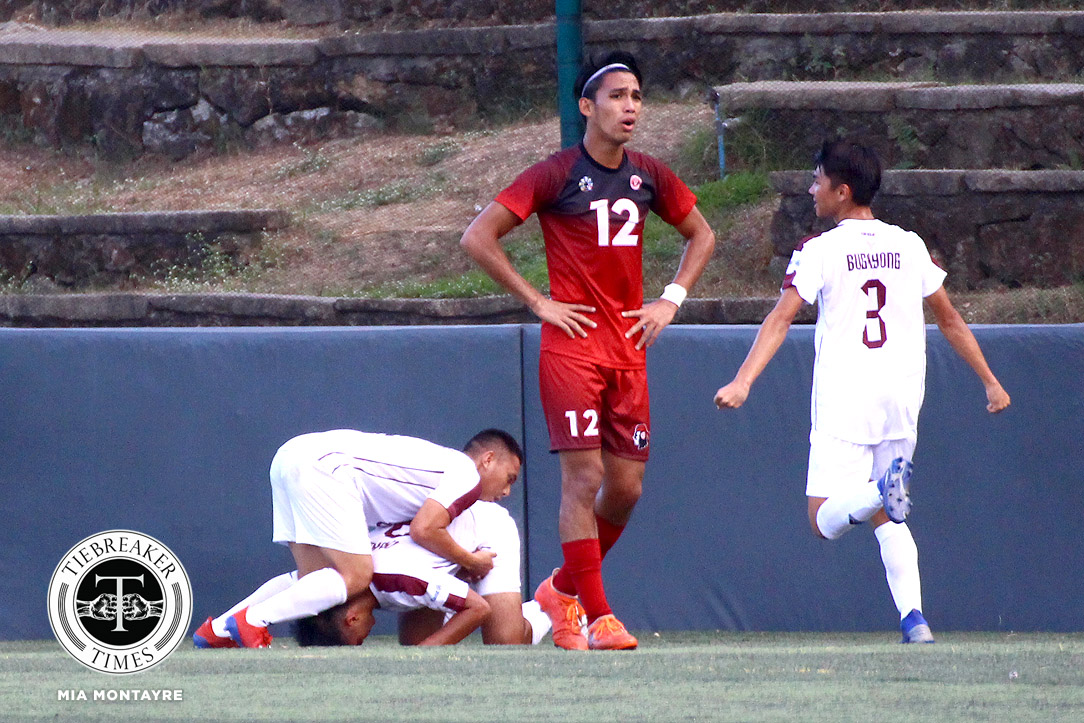 The best teams always find ways to win no matter how much the going gets tough.

With their backs against the wall, the University of the Philippines Fighting Maroons relied on a last-minute Kintaro Miyagi goal to prevail 2-1 over the heartbroken University of the East Red Warriors, Sunday afternoon, at the Far Eastern University-Diliman turf in Quezon City.

It was UP’s first victory after a three-game rot that included losses to FEU and DLSU, alongside a draw with UST.

The Fighting Maroons succumbed to a 42nd-minute goal from Red Warriors veteran Jasper Absalon, who finished coolly past UP goalie Anton Yared.

UP coach Anto Gonzales cut a frustrated figure at halftime and the former national team player gave his players a piece of his mind at the break. He then brought in the likes of Miyagi and JB Borlongan for starters Nikko Caytor and Raji Santos, to provoke changes in the game.

And the Fighting Maroons responded in a dangerous fashion. State U relentlessly attacked the UE backline, and managed to clinch a goal in the 62nd minute thanks to Christian Lapas’ close-range strike.

UE desperately strove to prevent another UP goal, as the Fighting Maroons were further inspired after Lapas’ leveler. Unfortunately for the Red Warriors, the inevitable arrived in the 90+2 minute, when Miyagi shot past goalie Frank Rieza for the late winner.

“I think we’ve proven this season (that) we’ve come from behind a few times. To be honest, we don’t need to reach that point. I think we have enough experience in the squad to manage games very well from start to finish. We don’t need to get our backs against the wall to respond because other teams will not give us a chance if they’re already leading. That’s what they need to learn. They don’t need to be at the backfoot to straighten things up,” added Gonzales.

State U (10 points) end the first round against the Adamson University on March 21, 2019, 1:00 PM. Meanwhile, UE (7 points) await their first opponent for the second round.

Paolo Hubalde makes sure to give back to Valenzuela: ‘Hindi nila kami iniwan’