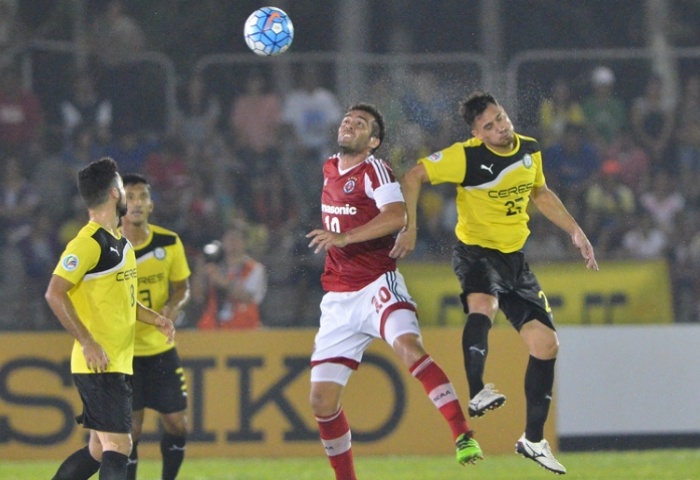 Finishing on top of Group E presented the best chance for Ceres-La Salle FC to go further in the AFC Cup, but unfortunately they faced opponents who are just more experienced than them in the second most significant club tournament in Asia.

The night ended sour for the Bacolodnons as Ceres-La Salle fell to Hong Kong side South China AA, 0-1, but not after extra time that extended the round of 16 affair to 120 minutes. A disciplined team coached by Ricardo Rambo, South China stood firm and picked out a game-changing moment early in the last half of extra time.

Long before the decisive moment though, both sides intended to get a head start as soon as possible. Yet with no one also wanting to fall behind, the first 45 minutes of action was quite a cagey affair. South China statistically had more shots than the hosts come halftime but that is because they dared to test their range whenever invited to do so. Such was the chance that belonged to Hiu Chung Law in the third minute. The midfielder had space outside the box and sent his attempt straight to Casas.

Six minutes later, Ceres-La Salle got to settle into the occasion and took their turn. Known as a great passing unit, the home team manifested their aptitude in passing through Martin Steuble’s clever delivery towards defender Jason Sabio. It might have been a bit too clever for Sabio not to decipher it early enough as he failed to react on time to meet the cross. More fine passing from Ceres-La Salle led to a half chance. Adrian Gallardo had the ball inside the box but was dispossessed timely by the South China defense.

The attacking barrage continued midway through the half when Stephan schröck aimed to set up Marañon. The Spanish forward’s shot was blocked and the ball then going to Ott whose shot also met the same luck. Flexing their might on offense, Ceres-La Salle were nearly caught on the counter and perhaps have Kim Sang Min to thank for a timely intervention 17 minutes before the break.

Approaching halftime, Ceres had two good chances to carve a breakthrough goal. First of those took place at the 34th minute. Schröck’s cross located Patrick Reichelt whose header just lacked power to test Man Fai Tsang. Five minutes after that, Schröck was denied by Mahama Awal when the latter intercepted a defense-splitting pass unleashed by Marañon. Reichelt fell down moments later in the box and the referee blew the whistle, but it was instead for the simulation he thought the Ceres-La Salle player committed. At the half, it stayed scoreless.

Right after the interval, the hosts created several chances in the first 20 minutes of the second half. The most outstanding of those came 51 minutes in via Marañon. He punctuated a series of passes in the box with a wise shot targeted to beat Tsang, but the South China goalkeeper was alert enough to tip the ball out. Another one happened four minutes after, this time Marañon just curling a decent shot wide. A third one could have come much closer at the 57th minute but Gallardo, set free by a Schröck long ball, was fouled just at the edge of the box. Ott’s resulting free kick was kept out for a corner.

Absorbing their opponents attacks, the visiting team then took it upon themselves to break the tie. Siu Kwan Chan got to head the ball well but Casas still managed to keep it out with a reflex save. What made it more captivating was his ability to keep hold of the ball in the attempt of stopping the shot. As the teams became more tired, a slow back-and-forth pace ensued towards the end.

In the final 15 minutes of the match, it seemed like both teams look content in seeing out normal time unscathed. Nonetheless, each team had one good chance to swing the game to their favor–neither proved to be decisive. Often in the thick of things, Marañon struck a volley that was palmed away by Tsang. Down at the other end, substitute Siu Kei Chu squandered an effort from close range. Extra time it is as neither found the back of the net after the 90.

The first half of extra time turned out to be a dull affair with no team producing a shot worthy of challenging either keeper. Ceres-La Salle had more of the ball but their players couldn’t create enough trickery to dismantle the compact South China defense. The halftime whistle blew with teams aware that another barren period would result in a penalty shootout.

It was an idea that Luiz Carlos, South China’s Brazilian talisman, didn’t really welcomed. The midfielder’s magnificent volley right at the start of extra time’s second half went to break the backs of the Busmen. It came from Law’s cross getting headed by Awal to his path and when given the space to hit it, the Brazilian provided a graceful hit that even Casas can’t get to parry away.

Now behind in a game they more or less controlled, Ceres-La Salle looked for ways to break the South China resistance. They struggled to bring the ball close but had one great chance just going wide. Kim Sang Min, the Korean defender, couldn’t get the ball go into the net down at the last minute. The visitors held on to eliminate Ceres-La Salle in the continental cup contest.

The AFC Cup journey for Ceres-La Salle may have ended here but the season is still young for the Negros team. They fly to Singapore tomorrow to prepare for a Singapore Cup tie before going back, perhaps stronger, as they bid to defend the UFL title.

BVR International tournament in the works for June