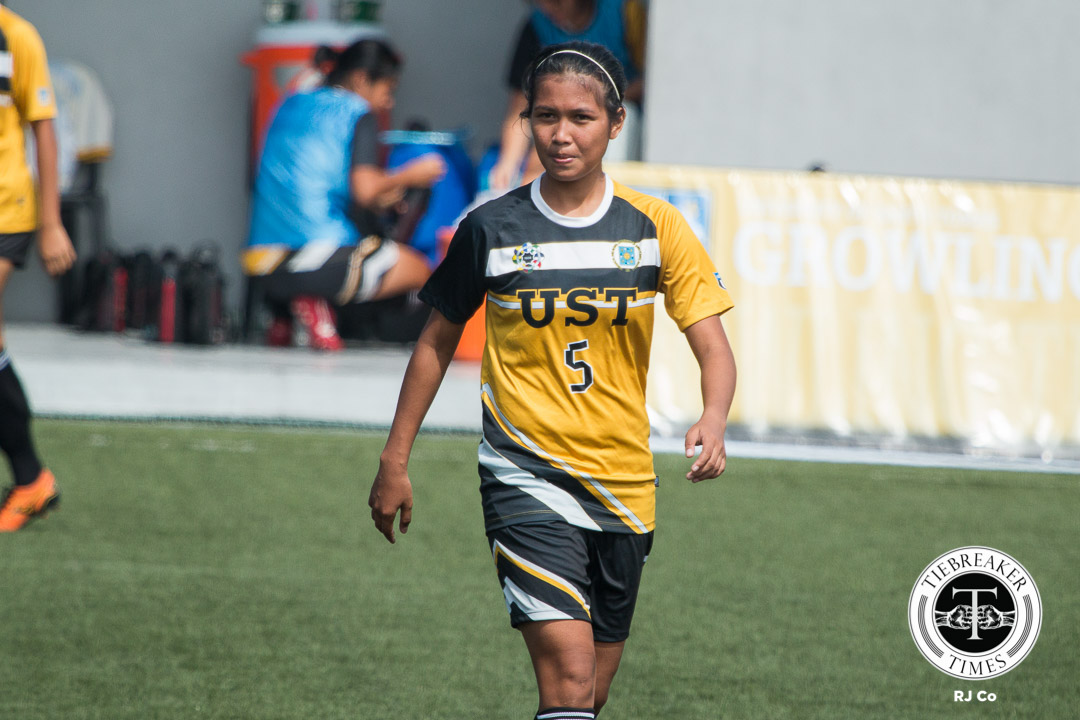 The University of Santo Tomas Lady Tigresses got themselves going in UAAP Season 78 as they overcame the Far Eastern University Lady Tamaraws last Saturday at the McKinley Hill Stadium. Basking in the glorious moment, veteran striker Jennizel “Junjun” Cabalan expressed sheer delight at how everything turned out well for herself and her team.

“Sobrang saya. Nakaka-overwhelm kasi start pa lang, lahat nakaka-feel na ng kaba,” she shared after bagging their first three points of the season. Cabalan pointed out that the nervousness — brought about by growing pressure to win — gave them the needed motivation to emerge on top.

“Hindi katulad ng ibang games na wala, maglalaro lang kami,” she noted. The Tigresses have not been entirely bad in their first two outings. They showed mettle to fight back against the University of the Philippines, but perhaps falling three goals down was just too deep for them to recover. In their next game, they took the lead against Ateneo de Manila University, but lacked the instinct to seal the win. A one-goal lead is never safe, and an end-game collapse saw them surrender to their foes in blue and white.

With their backs against the wall once again after falling behind to the Lady Tamaraws, Cabalan said she hadn’t been worried about losing the game at that point. As one of the senior players on the roster, she advised her teammates to stay focused and relaxed early in the second half. “Sabi namin na mas magiging strong kami kapag naghahabol kami. Nung first sila makagoal sa amin, mas tinatagan namin,”  Cabalan elaborated. After all, there was still plenty of time to turn things around. Victims of a late comeback last time around, the UST players surely know that as a fact.

Cabalan didn’t only provide encouraging words to her teammates; she also sparked the comeback badly needed by UST. Her unrelenting attitude earned her a goal just nine minutes after FEU went ahead. The equalizer set up a thrilling finish to the game in which her teammate, Charisa Lemoran, bagged a brace in the end to wipe out another Lady Tamaraws’ goal courtesy of Jovelle Sudaria. At the end of the day, the UST midfielder highlighted the immense desire of the team to win in the first round.

“Kailangan talagang manalo. Hindi pwedeng bottom lang kami at the end of the first round,” she stressed.

Coming up next for UST is a 1PM duel this Sunday against the De La Salle University. Aware of the challenges they will face not only in that game but in their quest to make it back to the finals, Cabalan reckons that it’s all about trusting each other and sticking to their game plan. “Makakayanan namin kung magkakaisa kami at walang susuko,” Cabalan furthered.

READ  Prince Orizu called up by Nigeria for Commonwealth Games

The win suggests that the Tigresses have woken up this season, and who knows, this might be the turning point Junjun and her teammates have been looking for.

Going back to basics key to regaining form for Tamaraws