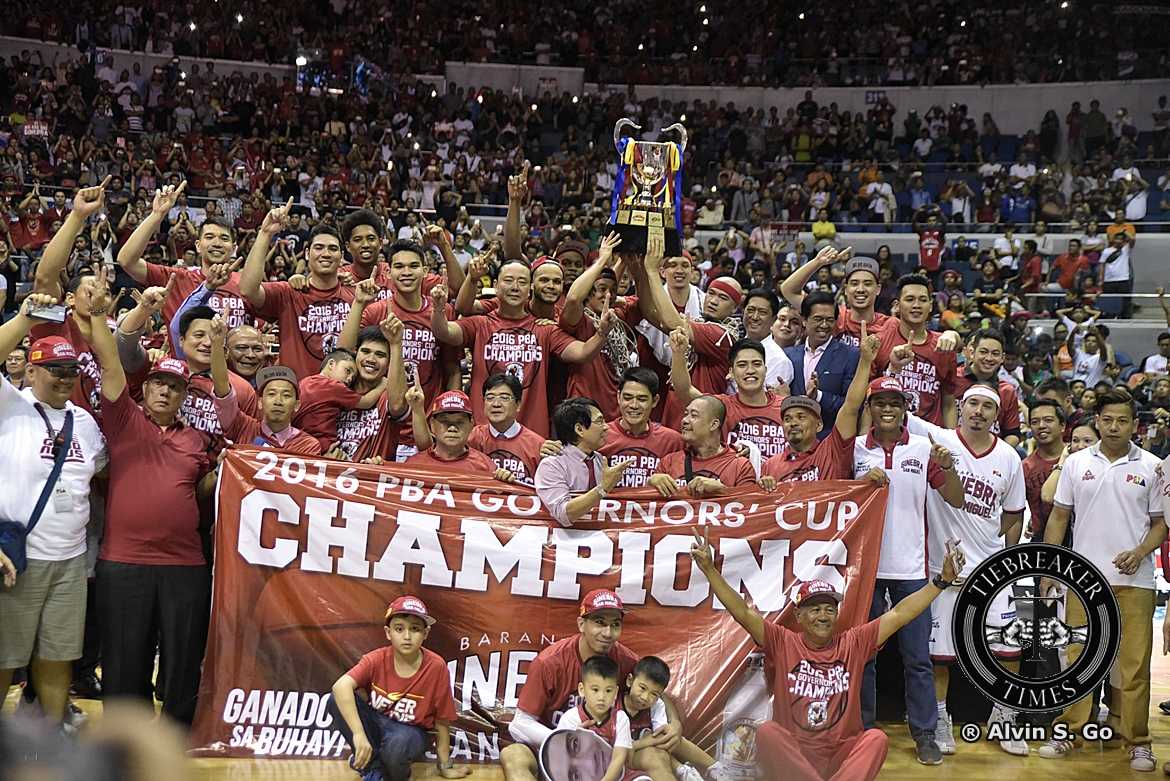 For eight years, they were at the receiving end of forgettable conferences, countless memes, and multiple heartbreaks. Tonight, the most popular ball club is back to being the kings of the hardcourt.

The end to their misery could not have been written better as Justin Brownlee drained a cold-blooded three-pointer to put a period to the eight-year wait of Barangay Ginebra San Miguel in an 91-88 storybook ending against the Meralco Bolts on a heartstopping Wednesday night at the Smart Araneta Coliseum.

The ‘Never Say Die’ spirit once again lived within Ginebra after being down by as much as 15 points in the first half. Ignited by the presence of Ginebra icon Senator Robert Jaworski, the Gin Kings rallied their way back in the third period.

The Ginebra starters turned it around in the second half after a bleak start behind LA Tenorio’s 13-point third quarter. By the last minute of the frame, Ginebra were able to take the lead for the first time at 65-64 before the teams went back-and-forth in a thrilling ending.

Jimmy Alapag and Allen Durham provided key jabs in the fourth to reinstall a mini-cushion. However, Ginebra fought back behind the Tenorio and Brownlee as they were able to tie the game at 84 with three minutes to play.

The Bolts tried to halt the celebration behind a pivotal steal by Cliff Hodge that led to two free throws. Fortunately for Ginebra, their prized import came up huge with a bank shot to tie the game, and finally coming up with probably the biggest triple, which will be remembered by most of the 22,528 strong who attended the venue.

“That was such a brilliant play I designed,” jokingly said by the awed coach Tim Cone after the miraculous shot. “He’s been awesome the whole conference (Brownlee). He just made a great play on his own. It was gutsy.”

“It’s just a truly amazing feeling. I’m happy for everybody. That was such a brilliant play I designed. They just made a great play and on his own. It was gutsy. It was going to overtime if he missed, so we’re in great shape. He’s been awesome the whole conference. Thank God.”

Cone also added the magic of Jaworski’s presence at the dugout during intermission that fired his team up. “I was angry, ticked off when Senator Jawo entered, he settled everybody. He gave comments and I think the guys felt something that I think they got inspired and took off in the third,” he shared.

he Fast and The Furious” tandem of Mark Caguioa and Jayjay Helterbrand got emotional despite holding up their coveted trophy. As they reminisced, Caguioa mentioned his plea to his backcourtmate to contemplate on retiring.

“It feels good but if feels kinda sad. Hindi ko alam kung if this is his last game and we’ve been together in practice. I hope he does not retire. Ito yung forever eh,” Caguioa said.

Aside from the championship-clinching three, Brownlee finished with 28 points, nine rebounds on 12/24 shooting. Scottie Thompson added 10 points, while Japeth Aguilar chipped in seven markers and nine rebounds in the clincher.

LA Tenorio played the lights out as well, tallying 25 markers, five rebounds and six assists. He was named the Finals Most Valuable Player. He posted norms of 17.2 points, 3.8 rebounds and 4.2 assists in the six-game series.

This is Ginebra’s first championship since 2008 and Tim Cone’s 19th title in the PBA.