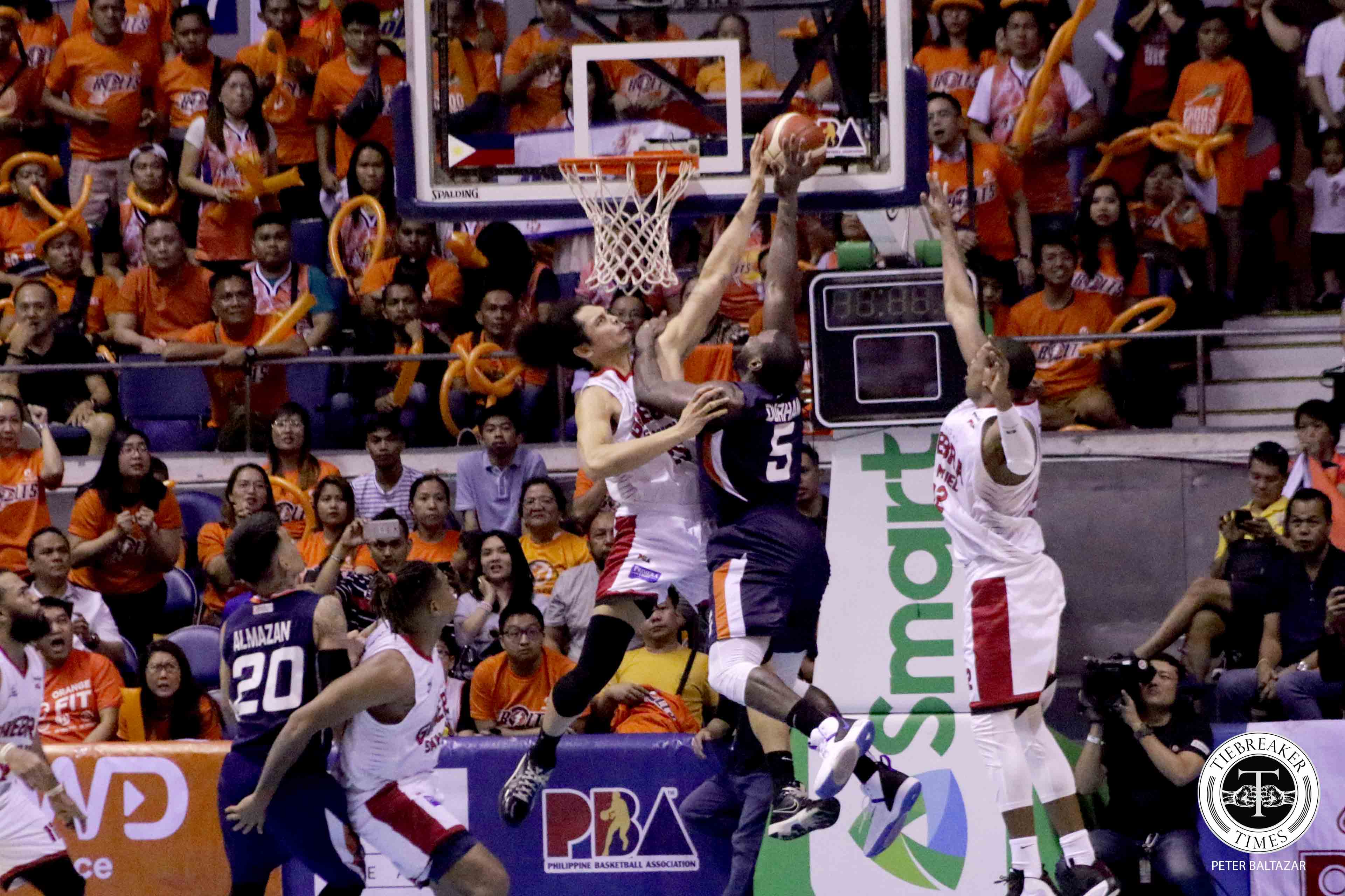 Japeth Aguilar made a big stop down the stretch as Ginebra drew first blood in the 2019 PBA Governors’ Cup Finals with a 91-87 win over rivals Meralco Bolts, Tuesday night at the SMART Araneta Coliseum.

The 6-foot-9 forward blocked Allen Durham’s potential game-tying lay-up with about 13 seconds to go, before Justin Brownlee sank his free throws with 11.3 ticks left to ice the game.

Aguilar’s swat helped preserve the win for the Gin Kings, who had taken the lead after a 10-point disadvantage in the third canto. Still, the Bolts refused to back down, fighting back and figuring in a see-saw battle late.

The second-generation cager finished with 16 points, six rebounds, and three blocks in the thrilling win.

“Japeth had the game-saving block at the end. It’s really nice to see him do that defensively,” lauded coach Tim Cone. “That was really a tremendous play — one of the best I’ve seen in a long time.”

Aguilar not only made his presence felt on defense; he also made an impact for the Barangay on the other end, forming a 1-2 punch with LA Tenorio early in the fourth quarter to lead the comeback.

The 32-year-old and Tenorio joined hands for a 10-0 run that gave Ginebra an 80-73 lead with 7:55 on the clock. This, despite Tenorio facing foul trouble for picking up four prior to the fourthh period.

Meralco, though, responded with a scoring run of their own. Chris Newsome scored nine points in the Bolts’ 12-4 blitz, allowing them retake the lead, 85-84, with 2:38 remaining.

#ReadMore  Greg Slaughter on first-ever BPC: 'It just shows that you can always come back stronger'

Tenorio and Durham then took turns in giving their teams the lead. Brownlee sank his freebies off a Bong Quinto foul with 33.3 seconds to go to give the Barangay the 88-87 lead.

Quinto had a chance to make up for that foul he committed, but his triple from the wing badly missed, allowing Stanley Pringle to go to the line. He split his foul shots, 89-87, with 23.5 seconds left.

Aguilar’s end-game brilliance came into play after that, and Ginebra walked away with the four-point win.

“Well, I honestly feel this is the way it’s gonna be every game. It’s gonna be a grind-out, you know; fight to the end and see who comes out on top in the last couple of minutes,” Cone said.

Brownlee top-scored for Ginebra with 38 points, 34 of which came across the first three quarters, alongside 16 rebounds. Tenorio supplied 14 points, while Pringle added 10 despite shooting 3-for-21.

On the other hand, ormer two-time Best Import Durham led Meralco with 25 points, 18 rebounds, and 10 assists in the loss.

Game Two of the best-of-seven series is on Friday, January 10, at the Quezon Convention Center in Lucena.