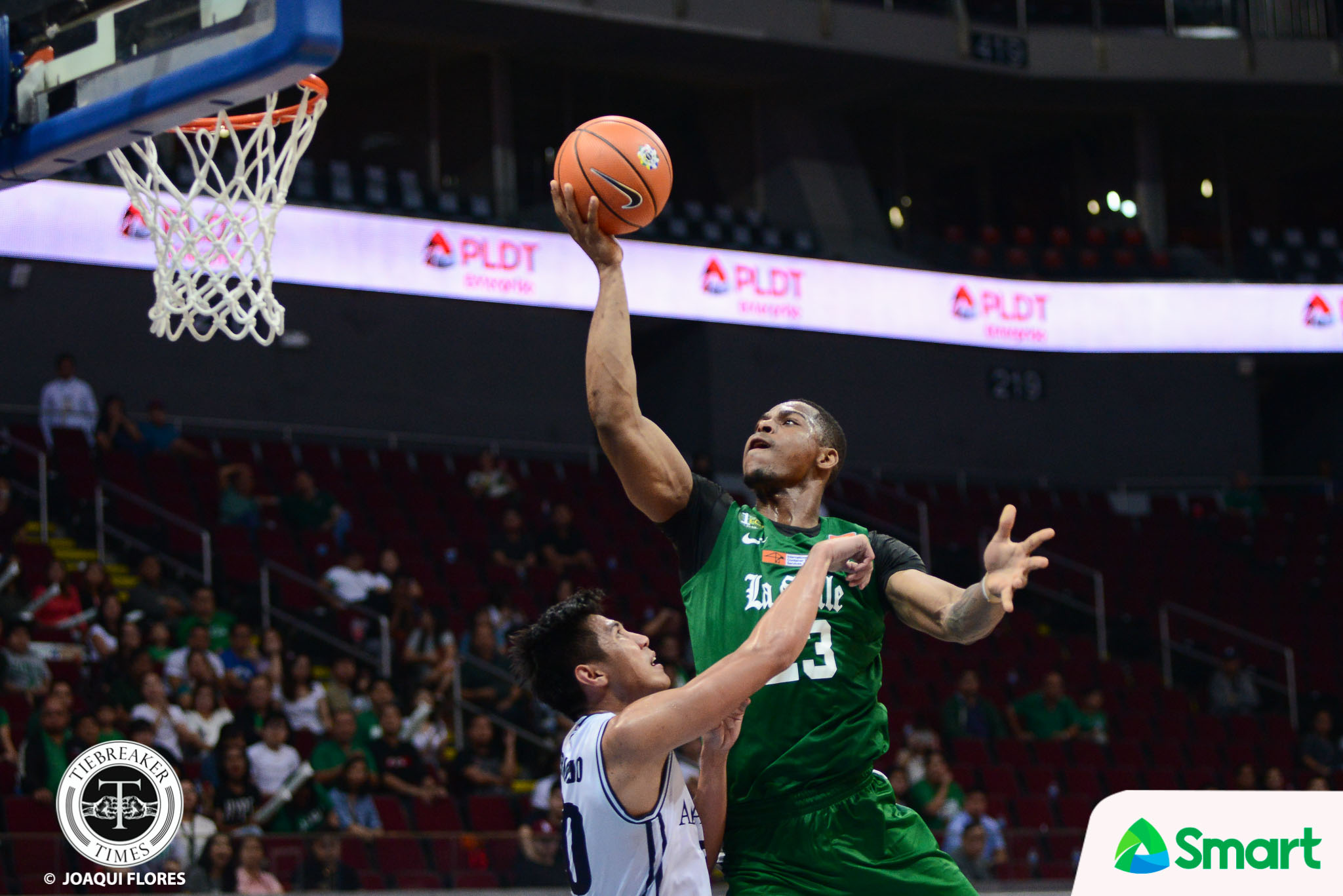 Back from a fruitful stint in the 2017 FIBA Afrobasket, Ben Mbala dominated every quarter, dropped a career-high 32 points, and buoyed the defending champions De La Salle University Green Archers over the Adamson University Soaring Falcons, 85-73, in the UAAP Men’s Basketball tournament at the SM Mall of Asia Arena.

Last season’s MVP showed his full arsenal right from the opening buzzer. Draining a triple, diving in for layups, and sticking back missed shots, Mbala dropped nine early points that keyed La Salle’s 19-3 opening volley. The Adamson defense had no answer even for the rest of the Green Archers as, with Mbala on the bench, the gap widened to 24, 36-12, entering the second period.

La Salle continued to go to Mbala in the second quarter, creating post-up chances for their big man. However, Mbala’s forays in the low block resulted in turnovers which the Falcons converted into transition goals. With the Falcons coming within 17, 43-26, La Salle rethought their attack strategy with Mbala.

Going from the outside-in, Mbala worked his magic again. Drilling another triple and scooping up several second-chance opportunities, the Cameroonian National Team standout finished the half with 21 points and had his Green Archers ahead, 55-33.

The third quarter started with La Salle going for the throat, as Mbala continued his rampage. But midway through the quarter the Falcons whipped out a 20-7 blitz with Mbala on the bench to come within seven, 70-63, heading into the final canto.

In order to finish the game, the Green Archers needed everything they could get from Mbala. With the Falcons forcing his squad to turnovers and bad shots, Mbala kept his squad ahead with dunks and layups. Trailing 73-81 with less than two minutes to go, Adamson sputtered and gave up crucial turnovers that allowed the Green Archers to seal the win.

Mbala added 10 rebounds and four blocks, but coughed up eight turnovers. The only other Green Archer in double-digits was Santi Santillan, who managed 10 points and gobbled up seven rebounds.

Robbie Manalang topped the Falcons with 16 points but shot three-for-14 from the field. Papi Sarr managed 12 markers and 16 boards.

La Salle looks to keep their streak intact on Saturday, September 23, when they face the University of the Philippines Fighting Maroons. Adamson, on the other hand, take on the National University Bulldogs on Sunday, September 24.

Is Dondon Hontiveros really hanging up his sneakers for good? ‘Di natin masabi’