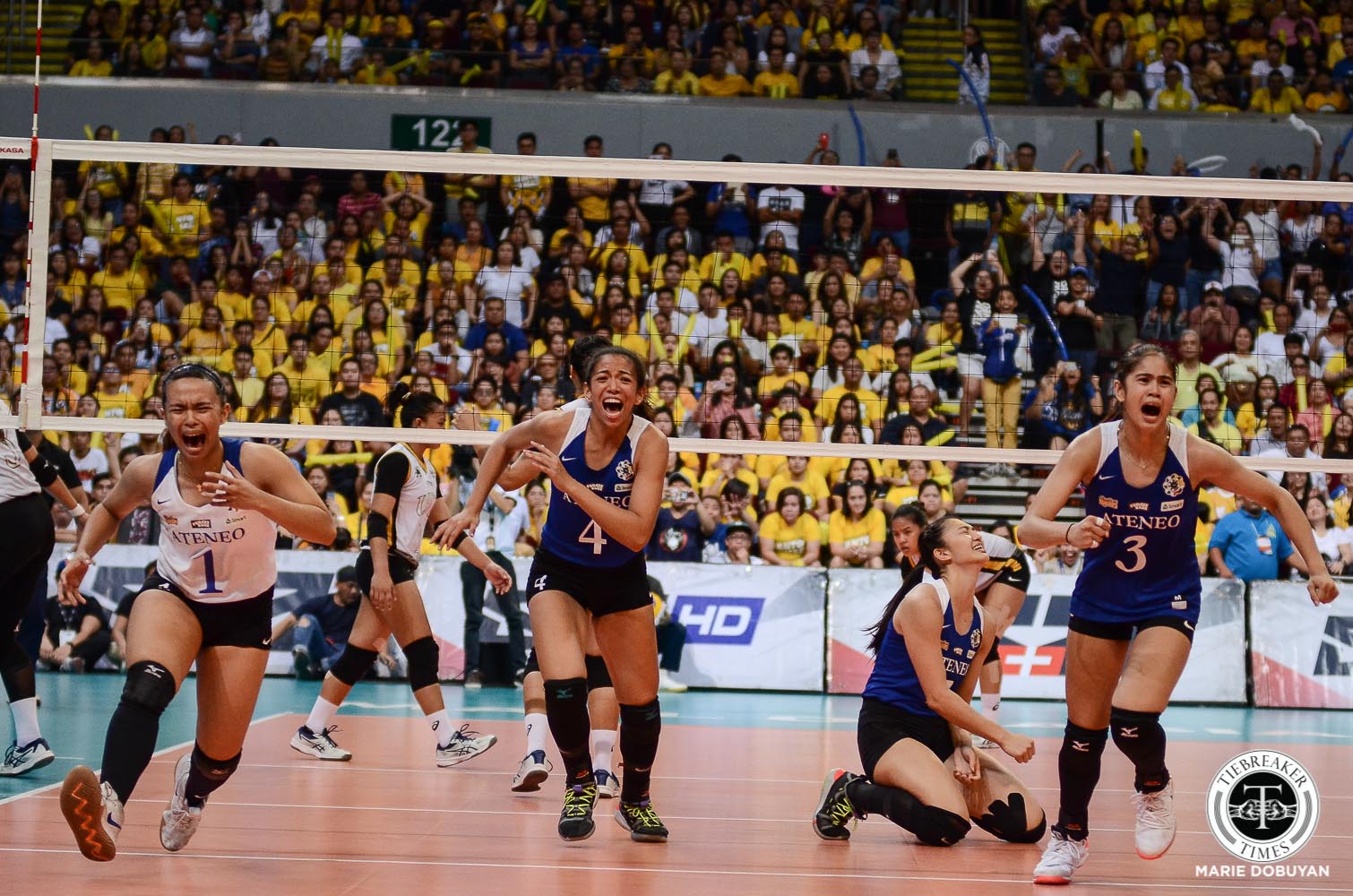 In the biggest match of the season, the Ateneo de Manila University Lady Eagles showed the value of championship mettle.

From dropping the series opener, the Lady Eagles have completed a stunning turnaround. They seized the UAAP Season 81 Women’s Volleyball Championship with a dominant Game Three win over the University of Santo Tomas Golden Tigresses, 25-17, 25-22, 25-22, at the SM Mall of Asia Arena.

The Lady Eagles started sluggishly, but the Tigresses were incredibly generous with their errors. UST surrendered 13 errors in the first set, dooming them to a first set loss.

The Tigresses recovered in the second frame, taking a 16-12 lead off of powerful attacking from MVP Sisi Rondina. Ateneo, however, stayed close thanks to more UST miscues. Deanna Wong then finished a 4-0 Ateneo run with back-to-back aces that gave them a 22-20 lead. Bea De Leon and Ponggay Gaston delivered the next two Ateneo points, before Rondina gave them their final point off a net touch.

De Leon and Kat Tolentino took turns leading the Lady Eagles’ offense in the third set, with the Fil-Canadian firing a hit through two blockers to give them a 16-9 advantage. Rondina and Rookie of the Year Eya Laure kept the Tigresses in the set, eventually forcing a 22-all deadlock. Maddie Madayag then made two clutch plays at the net to put Ateneo at championship point, 24-22. Jules Samonte delivered the final point.

“It was really all about having faith and trust in each other,” said De Leon.

“Everyone worked so hard and we just trusted na our sacrifices would pay off. Big kudos to UST for giving us a great fight. They really pushed us to get here,” she added.

The Lady Eagles last won a title in Season 77. Bea De Leon, Maddie Madayag, and Kim Gequillana, the last three Lady Eagles from that championship year, all played their final matches in the UAAP.

UST bids farewell to Rondina and libero Rica Rivera, both of whom exhausted their UAAP playing eligibility. The pair won a beach volleyball title in Season 77.

Rondina tallied 18 points in her final match, while Laure added 10.

Pasig handed heartbreak by Sosnovy Bor, to figure in do-or-die game vs Liman