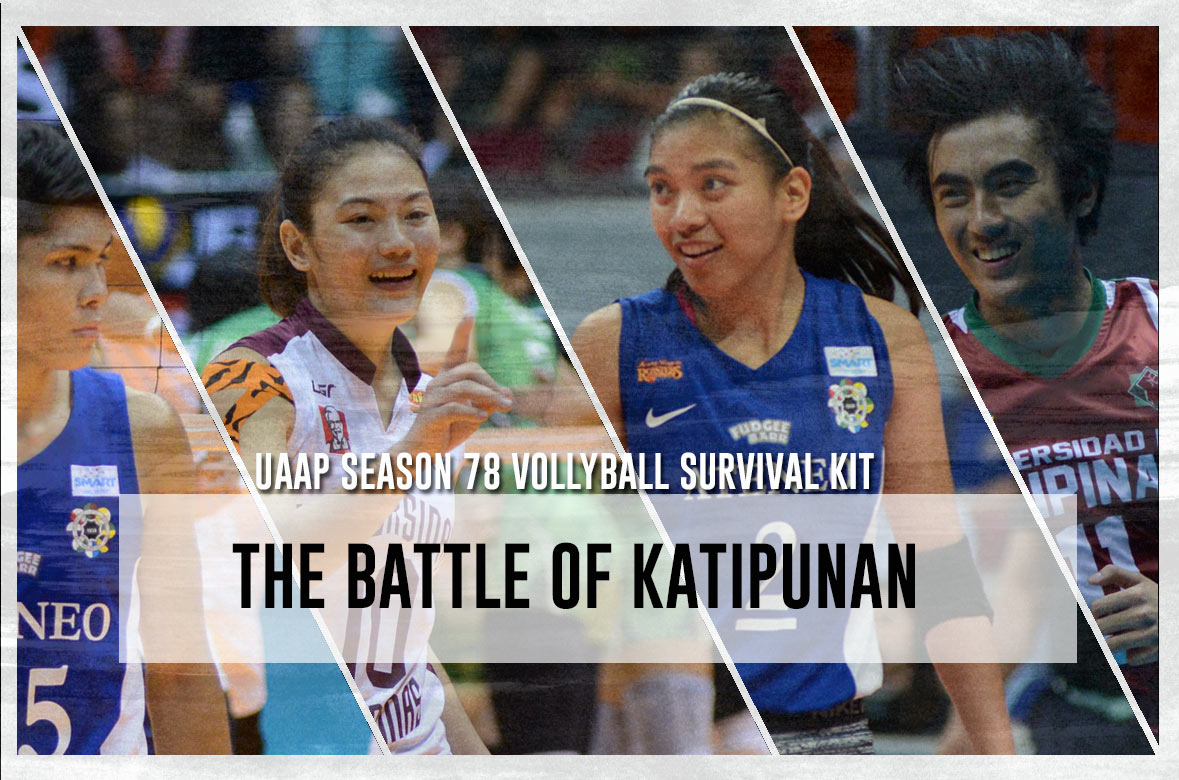 The battle for Katipunan finally gains relevance in volleyball. A result of pure serendipity, both the Men’s and Women’s teams of the Ateneo de Manila University and University of the Philippines face off in the UAAP Final Four.

The Ateneans are used to the grand stage, while the Iskos have finally fed their hungry supporters with momentous semifinal appearances.

Expect one of the best crowds ever. Here, we take a look at what to expect in terms of the matchups starting with the Men’s side.

Hello from the outside

UP pull most of their offense from their two open hitters, high-flying Wendel Miguel and team captain Alfred Valbuena.

Miguel had been consistently brilliant throughout the elimination round, pulling 20-point matches regularly. Starting his season as an off-the-bench, last-minute scoring option, Valbuena eventually worked his way into the starting lineup and showed the veteran leadership coach Rod Palmero wanted.

Both players are high-level threats but they are UP’s only real offensive arsenal. Aside from the occasional pipe set to whoever is in the back row, UP’s attack often stalls into sets to the open hitter.

Ateneo is a dominant defensive team who prepares insanely-well to lock down the opponents best options.

In their two elimination round matches against the Blue Eagles, Miguel and Valbuena did not score double-digits leading to relatively quick straight-set affairs.

For the Maroons to pull off an upset, they’ll need to surprise Ateneo with some variety. Good passing will be crucial to set up quick attacks and combination plays.

Rookie opposite hitter Mac Millete, had his moments this season, shining in their Final-Four clinching match against the Soaring Falcons last Wednesday. He, out of any Maroon, is best equipped to contribute offensively.

As if he wasn’t dominant enough, Marck Jesus Espejo takes on a different form in the Final Four.

His ferocious jump serves don’t hit the net or swerve out of bounds, he skies over blockers with ease, his muscles become more vascular, his hair turns spiky blonde, and, before you know it, Ateneo have a super-saiyan on their team and they’re up 10-0.

But by no means are the Blue Eagles a one-man team. In Espejo’s three seasons in Katipunan, he has had to do the least work this year, leading to a 13-1 record, the best in school history. Ysay Marasigan is a dynamo; their middles are high-percentage hitters; and they have a plethora of options in the second open hitter position.

But Marck Espejo in full-tilt is the epitome of unstoppable. When the Blue Eagles are caught in a bind, they go to Espejo to pull them out.

In their first round meeting against the De La Salle University Green Spikers, Ateneo found themselves down 1-2 in sets. Espejo then put on his cape and saved the team, scoring 17 points in the last two sets to finish with 32 points and avert an upset.

And who could forget last season’s Finals? Espejo teed off on on the National University’s vaunted set of blockers and had back-to-back 30-point outings to deliver Ateneo their first-ever title.

Ateneo might not need Espejo to have virtuoso performances as much, but, when they do, Espejo always delivers.

If UP somehow back Ateneo to a corner, they’re going to need an answer for the inevitable Espejo kamehame wave.

Ateneo might end up not needing the twice-to-beat advantage; they’re more experienced, and are better in almost every skill. They’ve shut down the Maroons before and are primed to do it again.

Unlike past champions, the Blue Eagles have remained hungry throughout the season, as if they were never champions at all.

UP are the overwhelming underdog against their neighbours. This is the first Final Four appearance for everyone on the team, and they might just be happy to be there.

If they can muster the same effort they had against Adamson University and NU, UP have a slim, outside chance.

This was the blueprint Jerry Yee used to hand the Lady Eagles a four-set loss in the second round.

It seemed simple, but UP executed with deadly efficiency, targeting Ateneo’s flimsy-armed receivers and coaxing soft hits. UP then retaliated with heavy blows that demoralized the Lady Eagles.

But Ateneo have remedied their illness, sort of. The main target in the back row is Alyssa Valdez, and Ateneo now place her so far back that targeting her often results in long serves. Amy Ahomiro moving out of the opposite position also helped a lot, as Kim Gequillana is miles ahead as a passer.

The main difference in Ateneo’s past matches is that they’ve tried to keep the pass high enough for Jia Morado to scurry beneath the ball and work her magic. For Morado, as long as the pass doesn’t hurtle recklessly her way, she’s probably going to find a way to set. And it isn’t as if she just tosses high balls to her open hitters, Morado can still set to any of her teammates.

This was evident in Ateneo’s second round win against La Salle. Even if her teammates didn’t give her decent passes, she still somehow had 62 excellent sets.

But it is not as though UP cannot replicate their serving magic. Everyone on the UP lineup serves heavily. and if they find their target, odds are Ateneo will struggle.

The Lady Maroons will also need to pass well, and they’ve shown they can consistently receive, at least more consistently than Ateneo. UP know Ateneo’s soft spots, it’s up to them pound it.

Alyssa Valdez only has, at most, a handful of matches left in the UAAP.

Throughout her career, Valdez has shown Kobe-esque tendencies. She knows the best way to thank her fans, coaches, and teammates is to give them her best every time she puts on her Ateneo kit.

“There are so many people responsible for getting me to where I am today. It’s really overwhelming to think about sometimes,” Valdez told Tiebreaker Times. “The least I can do is go out and do my absolute best in every match.”

She might not show it, but beneath her happy disposition is a ferocious competitor. Valdez takes every bad game to heart, even if the bad games are few and far in between.

The two-time MVP had one such bad match against UP in the second round. She was so depressed, she left the arena in tears and could not address the media.

Now Valdez is on a Kobe-esque farewell tour. She will most likely want to “make bawi” from her poor performance against UP.

But UP has a few future MVPs on their roster. This is not too bold a statement; UP’s rookies have been a hit this season.

Isa Molde and Diana Carlos lead the team in scoring. Unlike other neophytes, the pair relishes big games and don’t melt under the pressure. Past UP recruits turned out to be just hype. This batch can lead UP to a title.

UP matches up well with Ateneo in every position, meaning the Lady Eagles do not have an advantage anywhere.

But Ateneo has been here before. Valdez has led the Lady Eagles to the title round in each of the past four years. This is UP’s first taste of the Final Four since 2003.

The young Lady Maroons showed they can manage the pressure. But can they handle an Ateneo team trying to send their phenom off with a title?

It would be downright unreasonable to bet against Ateneo. The way they played against DLSU was a revelation, and removed all doubts of their chances at a three-peat.

UP must play near-perfectly for two matches against a determined Ateneo side. No team has beat Ateneo twice in a season since La Salle in Season 76, when the Lady Eagles won their first championship.