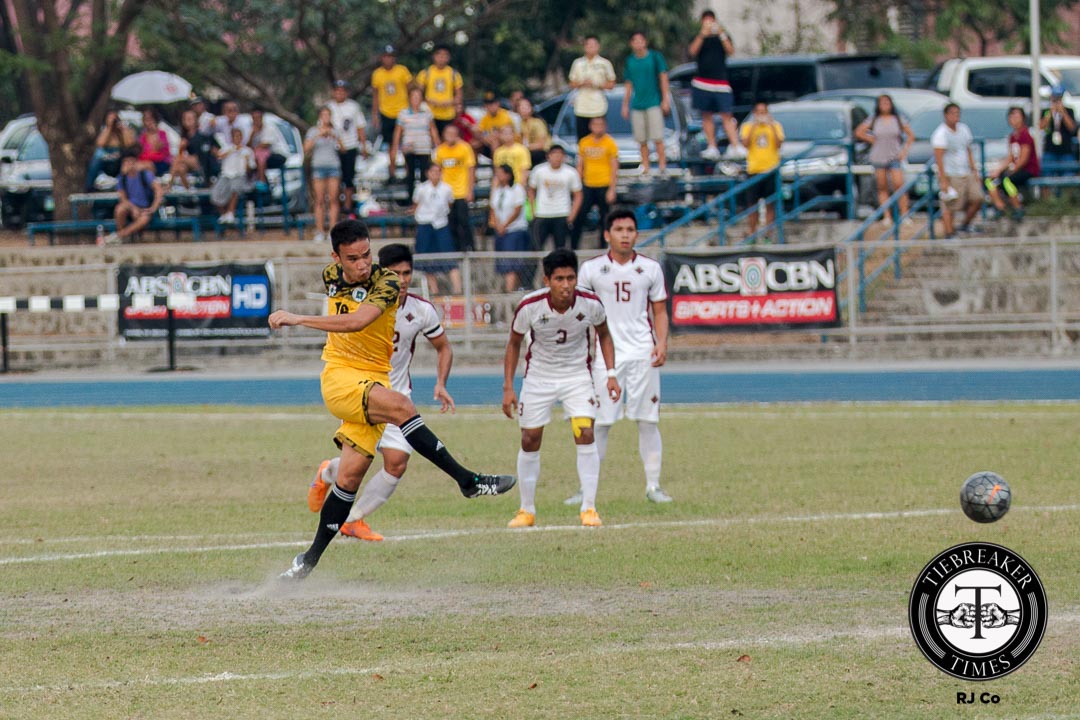 Consistent wins don’t have anything to do with luck anymore, but momentum. Champions teams know how to grind out results. It isn’t far-fetched anymore to say that the University of Santo Tomas Growling Tigers are title contenders. At this rate, they might well be the champions come May.

As for the Fighting Maroons, the lack of goals has turned from a sickness to a disease. Everything is fine in their play except for the most important thing – goals. The Fighting Maroons consistently struggle to put the ball at the back of the net. By all means, UP are still in the race for the Final Four; it’s just that the one thing which could separate them from a championship is the most basic thing in football.

The first half displayed two sides who had different ideas on how to approach the game. UP gladly had more possession and used it to create chances from open play. On the other hand, UST gladly sat back and waited patiently for the chance to counterattack.

Possession of the ball led to the Fighting Maroons having more chances. Center-back Clarino is a threat at set-pieces, and he headed over just two minutes into the game. Raphael Resuma then forced a save from UST goalie Zaldy Abraham moments later.

It became quite apparent throughout the first round, however, that UST were experts in resilience, as they made UP’s continuous hold of the ball count for nothing. In virtually their first attack, the Growling Tigers were awarded a penalty after rookie striker AJ Pasion was fouled in the UP box at the 16th minute. Clarino was given a straight red card for his troubles and sent off to the stands. Batisla-Ong stepped up to take the penalty and he calmly converted it at the 18th minute to give the Growling Tigers a priceless lead.

Despite being a man down, the Fighting Maroons maintained their hold of possession. JB Borlongan unleashed a goal-bound shot, but his attempt was saved by Abraham. The first half ended, though, with UST holding a 1-0 lead over UP. Momentum was on the side for UST as they were a man and a goal up. UP, on the other hand, were left to rue their disease this season – lack of finishing.

That disease became all the more apparent for UP in the second half. UST virtually had only one chance in the whole second half, while UP constantly bombarded their opposition goal to no avail. The Fighting Maroons directed the ball to the flanks in order for their wingers to deliver a quality ball inside the Growling Tigers’ box. Carlos Monfort had an attempt on goal early in the second half but Abraham saved it.

Cross, chance, cross, chance. It was relentless football from UP as the Fighting Maroons pushed for an equalizer. Feb Baya headed a ball from a corner kick, but his attempt was too weak and Abraham easily caught it. Kyle Magdato was brought on as a target man, but he missed a glorious chance when he should have one-touched the ball towards the back of the net. Instead, Magdato laid it off to Daniel Gadia who failed to shoot on goal. Patxi Santos then had a free kick but Abraham, again, dealt with it.

Due to the constant UP pressure, UST’s Dionisio Busmion was sent off for a second yellow card for a foul on Gadia. Both teams were then level at ten men each.

Santos then succumbed to his attacking instincts and ran through the right flank. He delivered a good cross, but UST defender Darwin Busmion cleared the danger. To give UP credit, the Fighting Maroons continued to implement their tactics in the face of frustration. Baya penetrated the right flank and delivered a wonderful cross, but Kintaro Miyagi squandered his header over. Deep into stoppage time, Vince Aguilar had a shot on goal but his attempt was too tame and Abraham easily caught it.

UST held on for all three points, and the Growling Tigers ended the first round in a game which epitomized the strongest aspect of their game – resilience. The same can be said for UP, but it has been impotence in front of goal that has capped their campaign so far.

The Growling Tigers have 17 points and are in 2nd place, with the De La Salle Green Archers at 1st place due to a higher goal difference. Goal difference also saw fit that the Fighting Maroons go down to 4th place with 11 points.