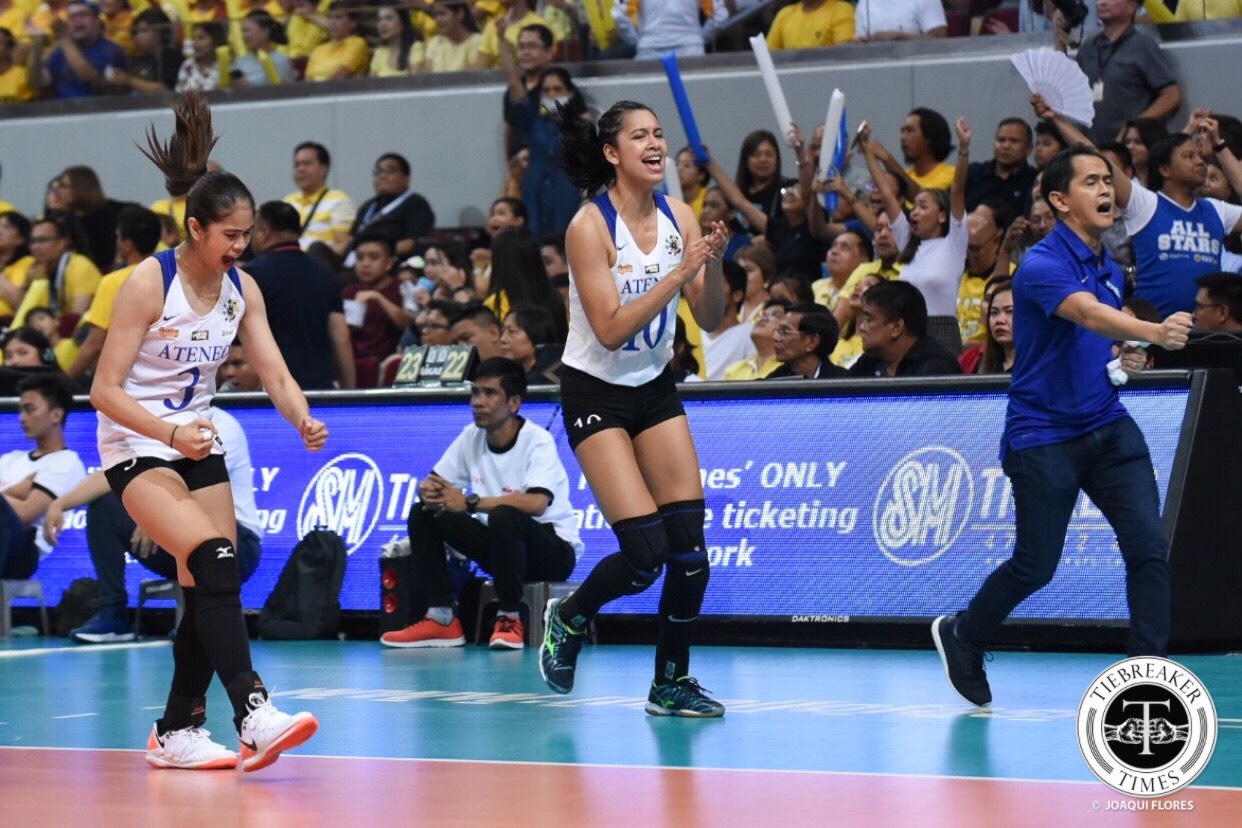 After a disappointing performance in the series opener, the Ateneo de Manila University Lady Eagles forced a winner-take-all match for the UAAP Season 81 Women’s Volleyball title, outlasting the University of Santo Tomas Golden Tigresses, 26-24, 14-25, 25-21, 25-15, at the SM Mall of Asia Arena.

The match began with an airtight finish after UST pulled ahead, 24-23, after a Cait Viray kill. Ateneo captain Bea De Leon sent the set to a deuce, before Kat Tolentino capped a long rally with an attack. UST set up a combination play in the following point, but Eya Laure missed and gave Ateneo the 1-0 set lead.

Behind an explosive stretch from Season 81 MVP Sisi Rondina, the Tigresses then dominated the second set, capping it with a 7-0 run.

Tragedy struck the Tigresses right from the first point of the third set. Later, Laure fell awkwardly and sprained her left ankle. UST relied on Dimdim Pacres and rookie Ysa Jimenez to fill the void, but Ateneo fended them off and took a 21-19 lead. Laure returned to the game at that juncture but struggled to put weight on her injured ankle. She gave up two errors while Ateneo took four of the next points to claim the set.

Laure’s injury continued to plague the Tigresses in the fourth set. Ateneo shuffled their lineup and took advantage, taking a 16-7 lead and never looking back.

With only six points in Game One, Ateneo captain Maddie Madayag tallied 17 points. Co-captain Bea De Leon improved from a four-point outing in Game One with 13 points.

Ateneo’s graduating captains did not want to end their UAAP careers without even putting up a fight.

“I just really wanted to gather them and remind them how hard we’ve worked for today. We’re prepared, we’re ready. All our sacrifices have prepared us for this day,” said De Leon.

“Well, of course, pumapasok talaga sa isip namin na it might be our last. Of course, lalaban talaga kami. We’re not gonna go down without a fight,” added Madayag.

Rondina finished with a game-high 22 points. Laure was the only other Tigress in double-digits with 10.

Game Three will be on Saturday at the SM Mall of Asia Arena.