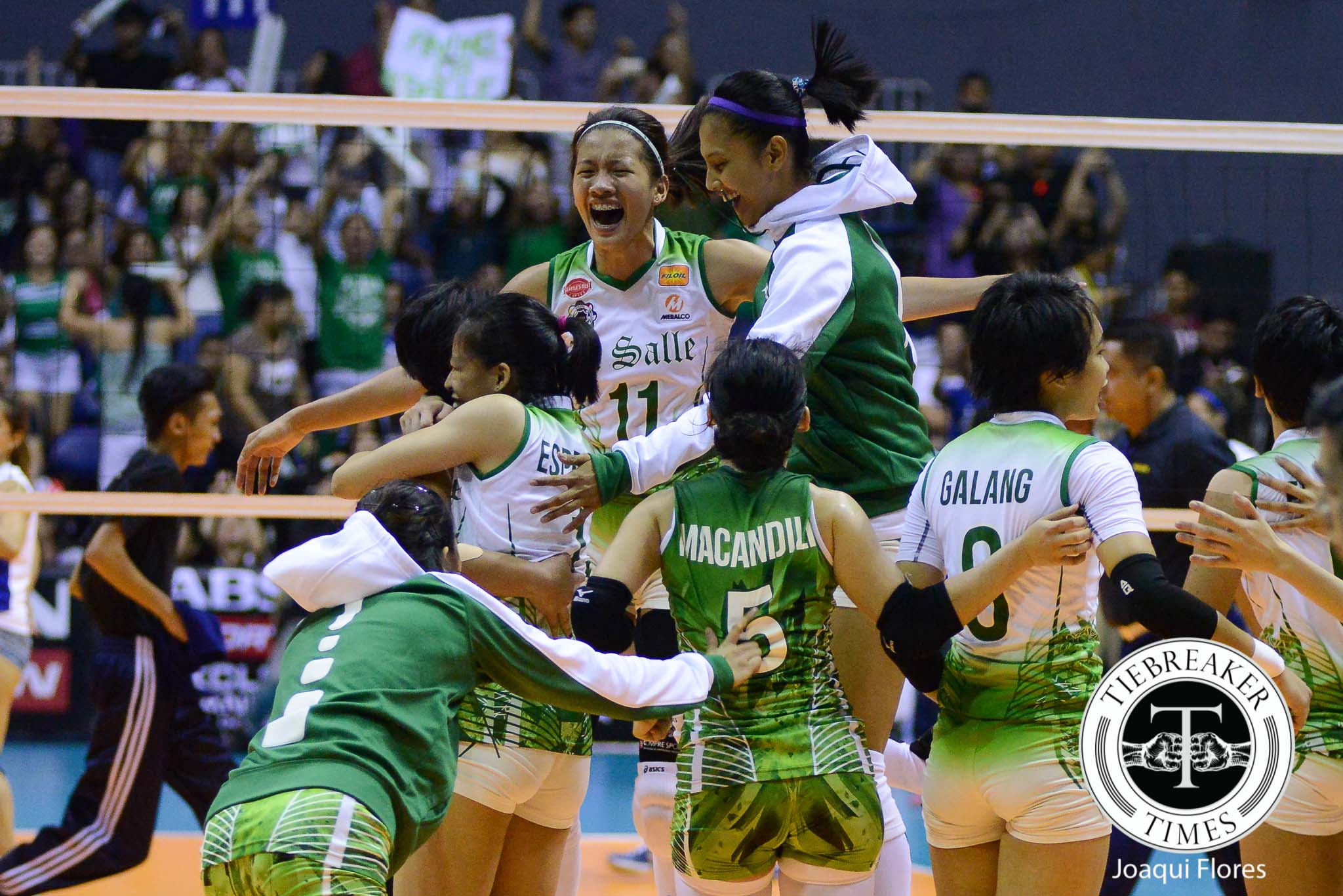 Ateneo’s offense came out firing in the first set. But their own errors helped the Lady Spikers keep pace. Down 12-14, La Salle called a crucial timeout that helped quell a strong Ateneo advance. From there, the Lady Spikers outworked Ateneo in ugly rallies. La Salle team captain Kim Fajardo scored off a dump, a joust, and even a spike to push La Salle to a 21-18 advantage. Spikes from Alyssa Valdez pulled the Lady Eagles to within a point, 20-21 and forced La Salle’s last timeout. Like how they started the match, Ateneo ended the set with a slew of errors – first an attack error from Valdez to put La Salle ahead, 23-21, then the set-clinching point off a Maddie Madayag service error.

La Salle then handed Ateneo the beating of a lifetime in the second frame. Fajardo got the romp started with her serves, dealing out four aces in a run that put her team up 8-0. The Lady Spikers then rode that momentum, pouring the pressure from their serves. Sporting rare looks of frustration, Ateneo trailed by as much as 12, 8-20, and had burned all their timeouts. Shedding her happy demeanor, Valdez took over but could only pull Ateneo to 23-15. Former MVP Ara Galang punctuated the set, sneaking a tip past two blockers then serving an ace to give La Salle a 2-0 set lead.

Ateneo seemed to sober up in the following set. Slotting Kim Gequillana in and shuffling Kiwi Ahomiro to middle hitter, Ateneo built a 14-10 lead, forcing a La Salle timeout. Fajardo again took over, serving up a storm and brewing a 5-0 run to give La Salle the lead. Galang kept the ball rolling, serving back-to-back aces for a 19-16 scoreline.

Valdez tallied 11 points on a miserable 10/33 attacking clip. She was the only Lady Eagle in double-digits.

La Salle now have a chance to take the top spot with a 5-1 record and a match still to come against the University of Santo Tomas Tigresses on Wednesday at the FilOil Flying V Centre.

Ateneo fall to 6-1, marking the first time in two seasons that there will be no stepladder Final Four in the tournament.