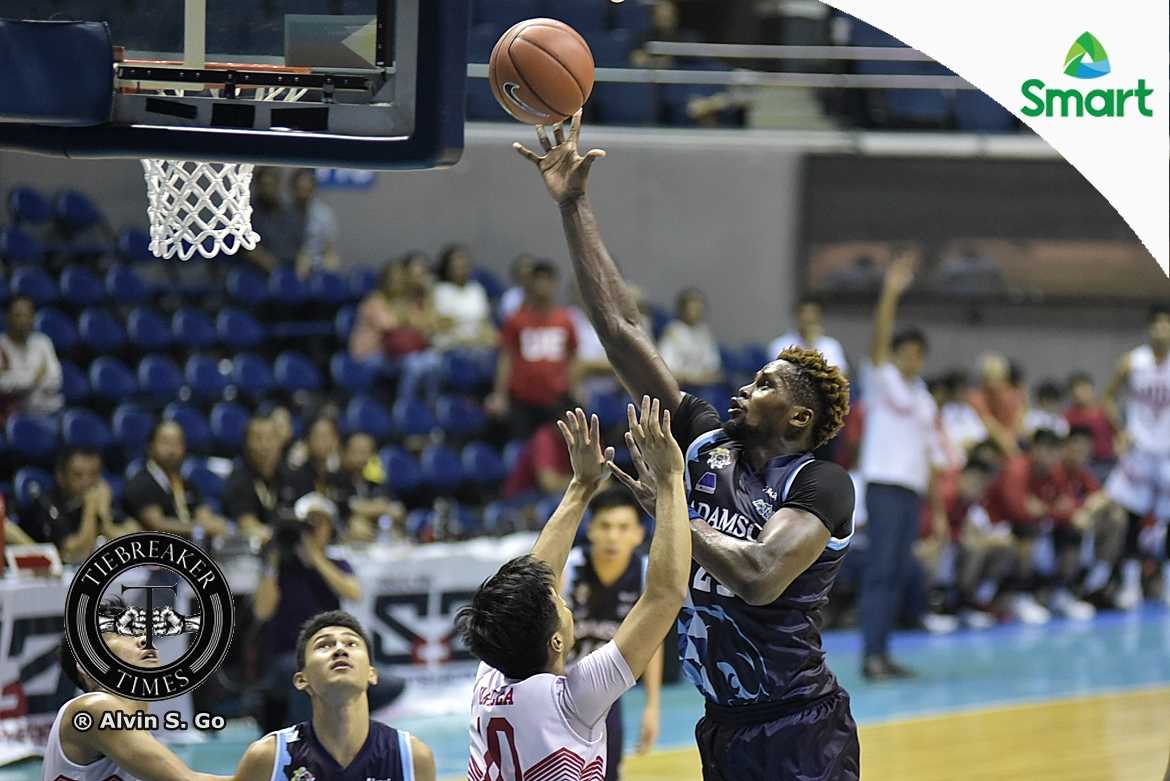 After handing the University of the East Red Warriors their first win of the season, the Adamson University Soaring Falcons did not allow lightning to strike twice, narrowly beating UE, 79-71, to arrest their two-game losing streak, Saturday afternoon at the Smart-Araneta Coliseum in Quezon City.

“It’s been awhile. At least we were able to arrest our skid,” Adamson head coach Franz Pumaren said. “If you look back at our schedule the past couple of games, kami ang may pinakamahirap ang schedule.”

Papi Sarr powered the Soaring Falcons with 25 points on 9-of-18 shooting, 15 rebounds, and three blocks. Moreover, Jerrick Ahanmisi bounced back from his first scoreless outing in the UAAP, as he finished the game with 17 points on 6-of-10 shooting from the field, 4-of-7 from distance.

“The coaches really helped me coming into this game, they told me to forget about the past game, and keep playing my game. I need to just keep helping the team and just forget about that game,” the leading candidate for Rookie of the Year said.

But Sarr led Adamson’s comeback and eventual surge in the third canto, dropping 12 points during that stretch. A jumper by Terrence Mustre gave Adamson the biggest lead of the game late in the quarter, 69-55.

“We just had to push them a bit. Get some contributions coming from the bench. During the second quarter, they made a run we weren’t able to get stops, it’s good for us playing in this type of game,” Pumaren added. “That’s the price of having a young team, we just have to fast track any team.”

UE could only cut the lead to as low as four points, 70-66, after a Philip Manalang triple, but Sarr answered with back-to-back baskets to keep the Red Warriors at bay.

“We’re looking at playing in the final four,” Pumaren shared. “I just hope these young guys would accept the challenge and the pressure. Hopefully we can attain that dream.”

Alvin Pasaol led UE with 16 points to go along with five rebounds and five assists. Paul Varilla also played his best game of the season with 13 markers.

The Red Warriors were without Bonbon Batiller, Edgar Charcos, and Clark Derige for the game.

The Adamson Soaring Falcons (5-5) next face the Ateneo de Manila University Blue Eagles (5-4) on Saturday, October 29, at 4:00pm. On the other hand, the UE Red Warriors (2-8) take on the league-leading De La Salle University Green Archers (10-0) on Wednesday, October 26. Both games will be played at the Smart-Araneta Coliseum.