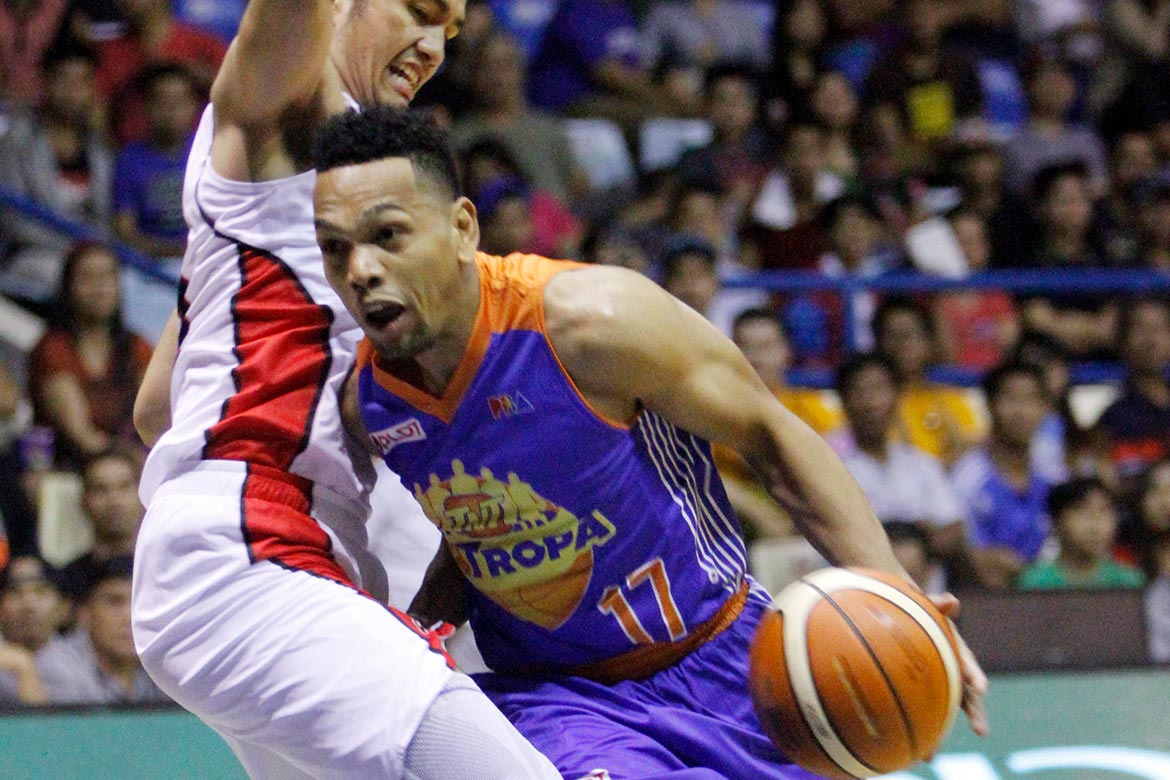 TNT KaTropa shrugged off a tough Alaska Aces squad late in the fourth quarter, 120-118, in Friday night’s main game of the 2016 Oppo PBA Governor’s Cup at the Ynares Sports Center in Antipolo City.

Jayson Castro was adjudged as the game’s best player with 26 points, 10 assists, and 5 steals. Mo Tautuaa also played arguably his best game in a TNT uniform with 18 points on 8-for-11 shooting from the field.

The Aces played without their top forward Calvin Abueva, who was slapped a one-game suspension earlier this week after elbowing Chris Ellis in Alaska’s match-up against Barangay Ginebra San Miguel a few days ago.

From a 9-all knot midway into the tightly-contested opening quarter, Alaska relied on import LaDontae Henton’s inside game to go ahead by 3, 19-16, with less than three minutes left. TNT, meanwhile, responded behind Jayson Castro, Mario Little, and Michael Mandaly to snatch the lead, 22-21, but completed freebies from RJ Jazul ended the first quarter in Alaska’s favor, 23-22.

TNT posted a wide, seven-point lead, 35-28, early in the second quarter. However, Dondon Hontiveros caught fire on offense, helping Alaska retake the lead, 40-39. TNT led once more, 42-40, courtesy of Castro, but the Aces, behind Henton, Chris Banchero, and Jazul, made a 15-3 run in the closing minutes of the frame to wrap up the first half with Alaska leading by ten, 55-45.

Alaska widened the gap to 14, 64-50, in the opening minutes of the third canto. But TNT, with Castro anchoring the team, surged back with a 17-4 scoring spree to inch within striking distance, 70-67, with less than five minutes left. From the score, the Aces outran TNT, 16-15, led by the offense of Hontiveros and JVee Casio to help Alaska sustain the lead, 86-82.

Down by four, 94-90, approaching the eight-minute mark of the final quarter, the KaTropa displayed poise, not allowing Alaska to add more points to their lead. With Castro, Ryan Reyes, Moala Tautuaa and Ranidel De Ocampo contributing on the offensive end.

TNT took a 118-112 lead with 21 ticks remaining but the Cebuano Hotshot was able to knock down a triple eight seconds later to give Alaska a chance for a potential hijack. Madanly then split his charities with ten seconds remaining.

After a Compton timeout, the Aces though wasted valuable seconds before Hontiveros connected on a three-pointer but had just three seconds remaining. A split on the stripe by Castro sealed the game for the Texters.

“If we play with this kind of attitude, hopefully, something will happen,” said TNT Head Coach Jong Uichico in the post-game presser, with regards to the comeback his team made to eke out their third win in a row.

Henton led Alaska with a game-high 35 points to go along with 14 rebounds. Hontiveros added 22 points on a perfect 8-for-8 shooting from the field.

In a game that saw 25 three-pointers made, it was the free throws that made a difference as TNT converted on 27 of its 39 charity attempts while Alaska went 20-for-30 from the same distance.

The victory sends TNT to a 3-0 win-loss slate and now shares the top spot with the Mahindra Enforcers. Alaska went down to 1-2.