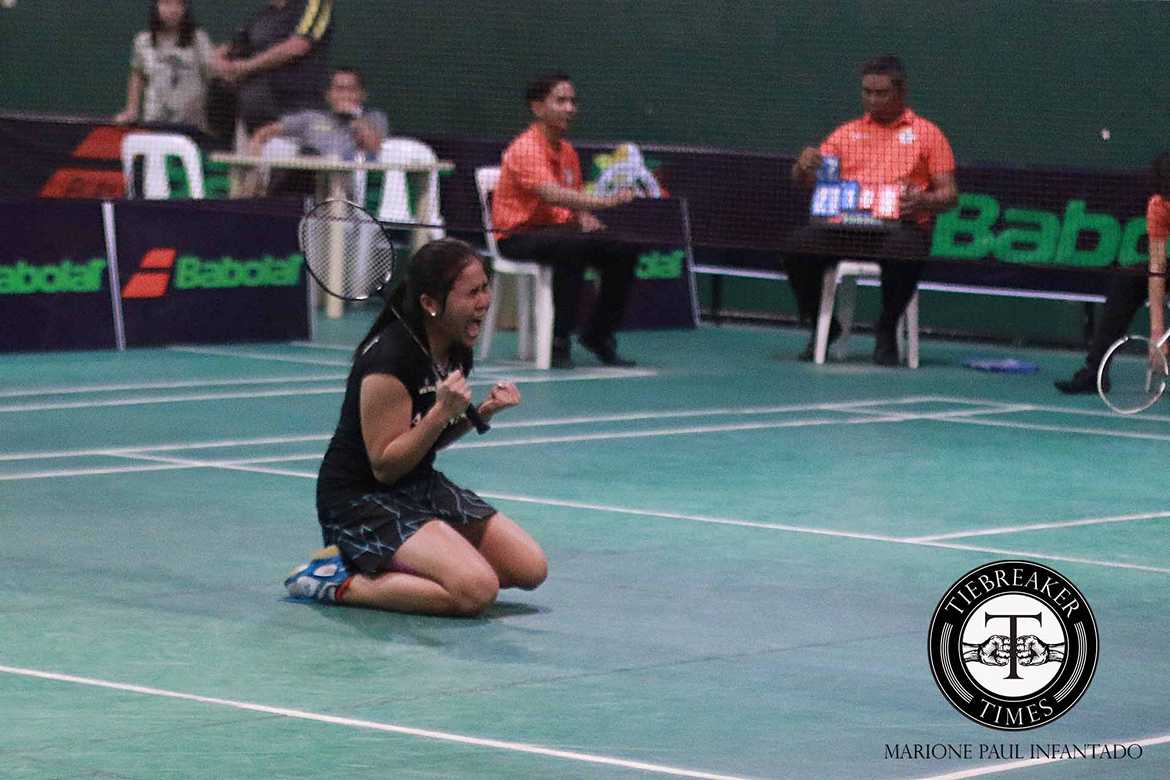 Last year’s runners-up pulled off a stunning upset against the reigning back-to-back champions and nemeses University of the Philippines Lady Maroons, 3-2, to move a win away from their third crown in five years, Sunday afternoon at the Rizal Memorial Badminton Hall.

Ateneo showed their determination and will as they swept the first two singles matches, dispatching two Maroon giants in the process. Team Captain Bianca Carlos asserted her mastery over Poca Alcala as she took the first singles match in two games, 21-11, 21-11.

The Ateneo skipper pounced on the opportunity as she took the fight to her usual conqueror. Carlos fired on all fronts as she walked away with the rout.

What was perhaps the turning point of the tie was sophomore Samantha Ramos’ upset of former Most Valuable Player Gelita Castilo in two tight games, 21-19, 21-16.

In the opening game, Castillo took the initiative, as the newbiew from Loyola succumbed to miscues. Nevertheless, when Ramos got her groove, she was unstoppable. The fifth-year ex-Lady Eagle tried to keep it close, but Ramos managed to clinch the frame.

The second-year Atenean used this momentum into the following game and never looked back as she finished the match with a kill.

The defending champions then played true to their monicker and dominated the two doubles matches to force a deciding singles match.

Alcala and Castilo joined forces with UAAP 77 MVP Jessie Francisco and UAAP 78 Rookie of the Year Lea Inlayo, respectively, to get the two-player contests for the Lady Maroons.

In the first doubles, Alcala and Francisco shook off the challenge of Carlos and rookie Chanelle Lunod in two games, 21-18, 21-12. The Ateneans took the initiative for in the opening set, but errors piled up for them that consequently conceded the frame to UP.

In the following game, it was all from the Diliman shuttlers as Alcala and Francisco pummelled Carlos and Lunod’s defense with a barrage of attacks.

Castillo and Inlayo then took the second doubles in a more convincing 21-12, 21-16 victory. The two power hitters were just too much for Geva De Vera and Cassandra Lim in both games. The UP duo did not let the opponents to even stand a chance at the match.

Last year’s Trixie Malibiran then pulled off the biggest comeback story of the year.

Sidelined during the UAAP 78’s title series, the fourth-year senior showed her determination and upended reigning MVP Bea Bernardo in two games at 21-17, 21-9.

Malibiran shook off some rusty moments and caught the UP stalwart napping on several occasions. Aside from converting her drop shots, the Lady Eagle also scored on slices and smashes. With her victory, she sent her squad on the brink of reclaiming the crown.

Ateneo head coach Kennie Asuncion was happy that her wards delivered, but threw some cautions.

“[I am] super happy, but of course, we’re still focusing pa because there’s one more game before we say that ‘We have done it,” she said. “Sa mga games na di naming nakuha, we’ll work on it.”

The next tie for the championship series between the title-seeking Lady Eagles and defending champions Lady Maroons will happen on Wednesday, October 15, at the same venue.