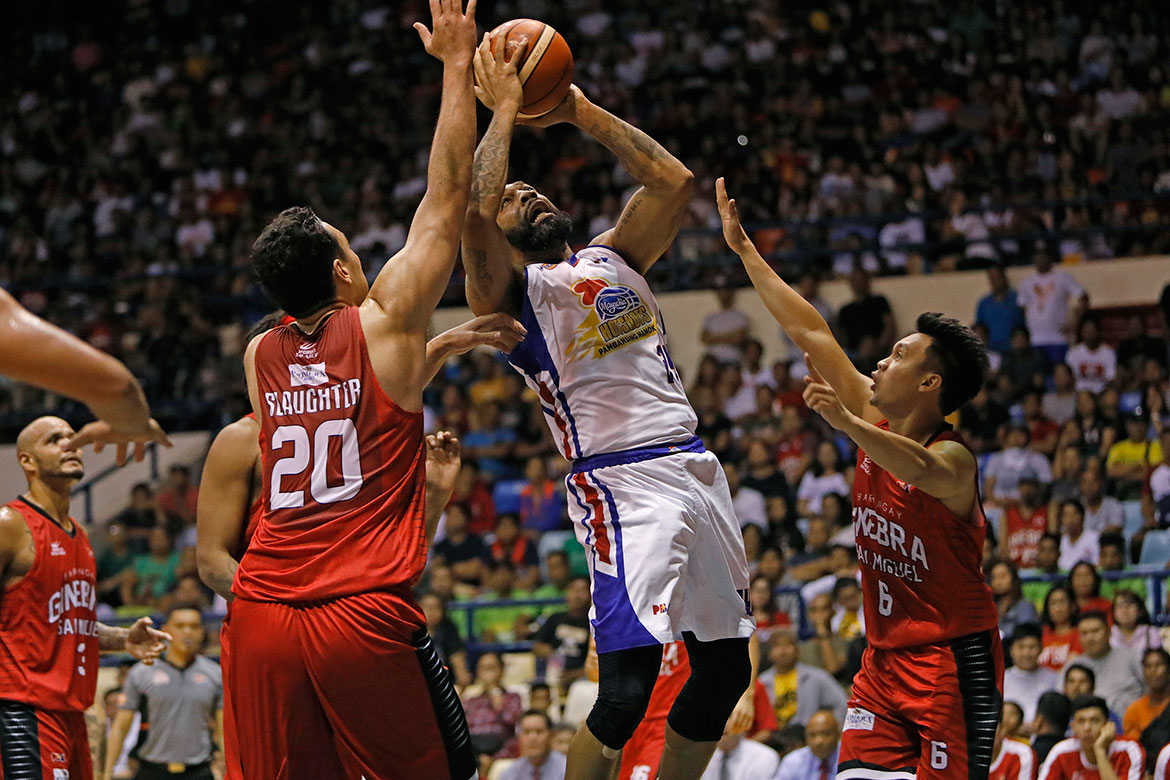 Travis’ outing was capped by a huge three-point play with 44.1 seconds left that gave Magnolia a 108-106 lead. After, freebies by Jio Jalalon and Paul Lee were enough to end Ginebra’s two-year reign in the conference.

“Yung puso ng import ko, grabe. Wala akong masabi,” praised Magnolia head coach Chito Victolero of Travis, who was even doubtful to see action in Game Four thanks to a grade two hamstring injury, which he sustained back in Game Three.

Ian Sangalang had 14 points, six rebounds, and six assists, while Lee chimed in 11. Jalalon had nine.

Adversity was pulling Magnolia down in the final 2:17, when they contested that Justin Brownlee’s block on Lee’s lay-up was a goaltending violation. Victolero was assessed with a technical foul for that, and LA Tenorio made the free throw.

Justin Brownlee made a pair of his freebies moments later to give Ginebra a 106-101 lead with 1:44 remaining.

But that then lit up the fire within the Hotshots. Jalalon calmly sank his free throws with 1:18 left, as Ginebra went over the limit with their fouls, and Travis pulled off the booming three-point play with 44.1 ticks for a 108-106 lead.

Magnolia then turned to their defense to distract Ginebra, and that worked as Tenorio and Brownlee missed their treys. Joe Devance tried to save the ball but it went outside, returning possession to Magnolia with 26 ticks to go.

Another pair of Jalalon free throws about three seconds later widened the Hotshots’ lead to four. But Brownlee sank his tough fallaway jumper to slice the deficit to just a field goal, 108-110, with 14.6 seconds left.

Lee was fouled afterwards by Tenorio, and he did not waste the opportunity to wham the nail in the coffin as he went perfect from the stripe with 13.7 seconds left to play. Ginebra then failed to convert as time expired.

“But I give credit to them and the other players because they stood together. Sabi ko sa kanila if we stay together we will survive, and yun ang nagawa namin,” added the second-year Magnolia mentor, trying to hold back tears.

Brownlee had 32 points, nine rebounds, and seven assists in the loss, while Japeth Aguilar had 25 points and 14 rebounds. Scottie Thompson filled up the stat sheet with 12 points, eight caroms, eight assists, and a game-high six steals.