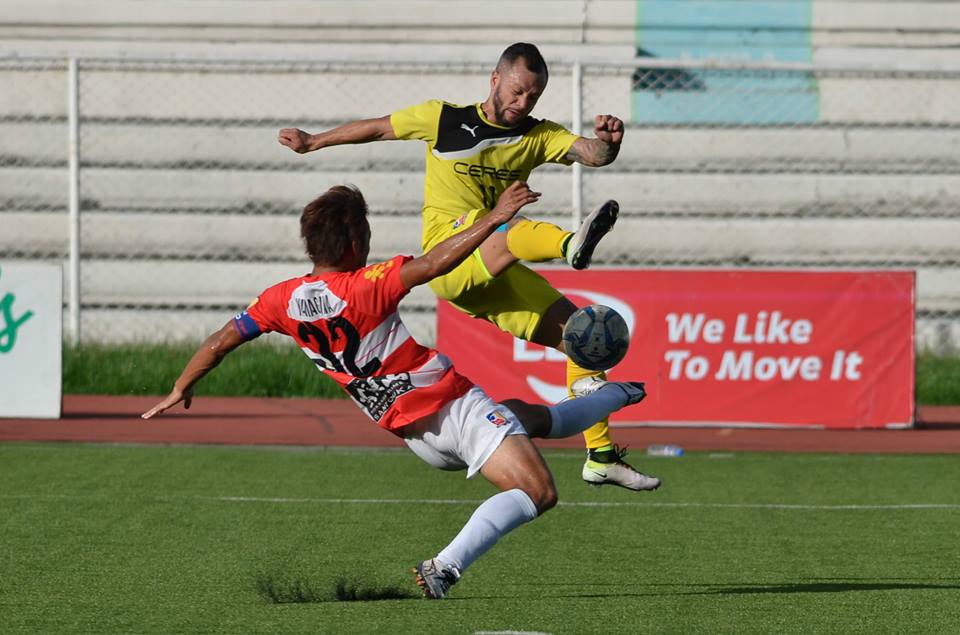 The Loyola Meralco Sparks also climbed one spot to second place with a 4-0 crushing of Forza in the other match.

Phil and James Younghusband accounted for two goals each as the Sparks scored their third straight victory.

The results meant Ceres moved to the top ahead of Loyola and Global on goal difference. Global however has a game in hand.

It was Ceres’ best performance yet this season that made heads turn as coach Ali Go’s side rediscovered its lethal form in four blistering minutes in the second half to restore order to what has been a sputtering campaign.

Adrian Gallardo opened the scoring in the sixth minute, but he found himself on the bleachers by the time second half started after he was sent off late in the first half for a dangerous challenge on Voltes defender PJ Fadrigalan.

Former Ceres player William Espinosa cancelled out Gallardo’s opener, before Voltes capitalised on its man advantage at the stroke of halftime when Japanese striker Takumi Uesato swapped passes with J Baguioro before cooly slotting the ball past Mike Casas.

Down one goal and also with a man disadvantage, the odds were stacked against the defending champions.

But Stephan Schrock sparked the comeback, equalising just five minutes after the restart when his cross was deflected to goal by Masaki Yanagawa. Ceres went ahead three minutes later when Orman Okuinaya headed home from close range off a cross from Patrick Reichelt.

Casas conceded a penalty midway in the second half, but atoned for his mistake by stopping Uesato’s penalty, preserving Ceres’ lead.

“I just told the players that our season is on the line in this match,” said Go. “I’m glad that they were able to respond that way. Voltes was just a tough team to beat.”

The Sparks were surprisingly held scoreless in the first half against a team that conceded 10 goals against Ceres in its previous match.

But an expertly taken free kick from Phil Younghusband in the 56th minute broke the resistance. A precise finish from James Younghusband doubled the advantage in the 67th minute, before the Loyola skipper made it 3-nil three minutes later with a close-range strike.

Phil rounded out the scoring six minutes from time with a controlled strike from inside the six yard box.