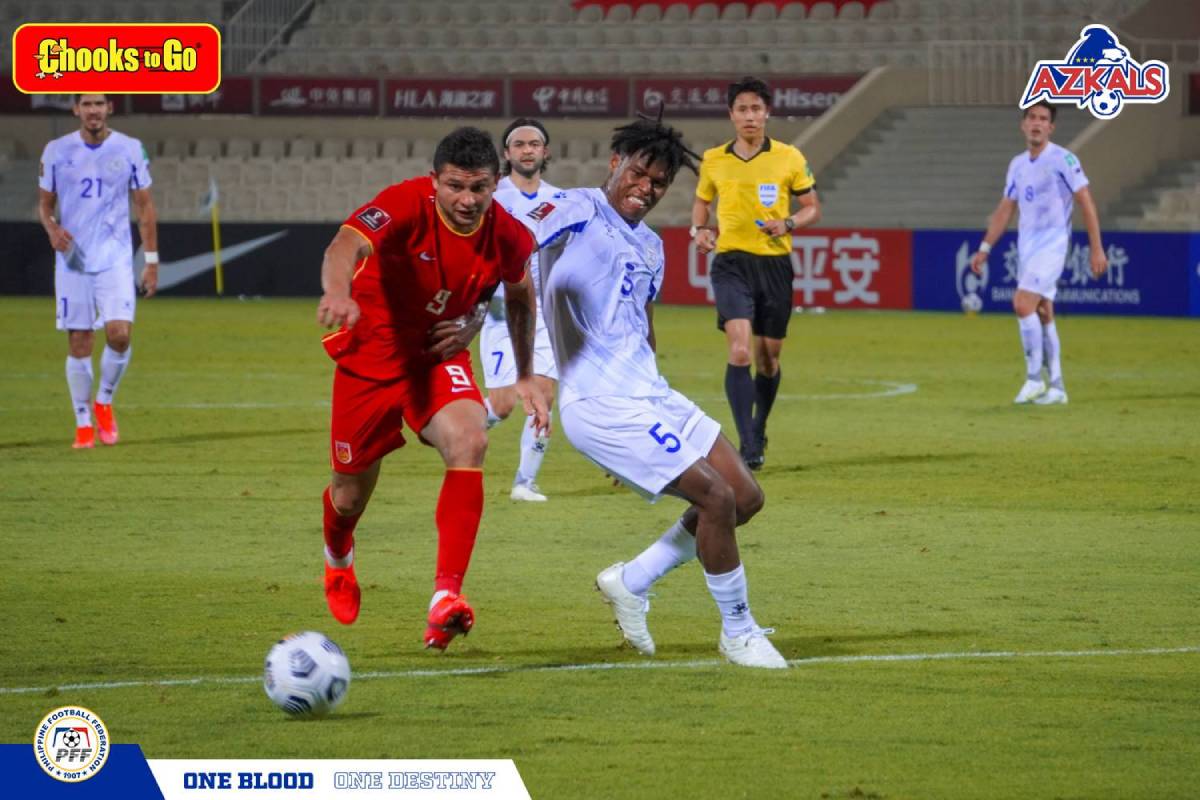 For years since the Philippine Azkals rose to prominence, there has always been a center-back or two who becomes the foundation of the team in its foreign conquests.

The likes of Aly Borromeo, Rob Gier, and Juani Guirado embodied the fighting spirit of the Azkals in the past.

Despite seeing the Azkals lose their third fixture in the joint 2022 FIFA World Cup and 2023 AFC Asian Cup, a 0-2 defeat at the hands of China at the Sharjah Stadium in UAE, one player showed the same grit as his predecessors in the debuting Jefferson Tabinas.

“I think it was not bad but we needed to win this game,” said the 22-year-old Fil-Ghanaian who was born in Japan.

“Even if we couldn’t get the ball but, you know, we needed to win this game. We had a lot of accidents but it’s not for… But yeah, everyone played good and I’m proud of them.”

Tabinas is a product of Japan’s youth system and is now a player for Mito HollyHock in the J2 League.

He also has a younger brother, Paul, who is 18-years-old, also plays as a member of the backline for J3 League side Iwate Grulla Morioka and stands at 6-foot-1.

And they made sure to catch Jefferson’s debut for the national team even if it was in the wee hours of the morning.

“I was happy. I was happy. Kasi yung family ko, always watching me on the TV. They always stay in touch with me. I’m like them because they’re always very happy and my brother is also happy,” said Tabinas, who shared that it was his mother who felt the most emotional seeing one of her sons play for her birth nation.

At his young age and playing in a back four that included Patrick Reichelt at right-back, Michael Kempter at left-back, and Carli de Murga partnering him in the middle, Tabinas could have been forgiven if he made some rookie mistakes. However, the Kirimitsu Gakuen High School alumnus played so well as he thwarted any Chinese player that tried to trick their way into the Philippines box and had the street smarts to fish for fouls when the opportunities to do so came.

Even the likes of naturalized forward Elkeson de Oliveira Cardoso, who currently plays for Chinese Super League club Guangzhou Evergrande, and current Espanyol player Wu Lei playing upfront for China were not able to intimidate him into making mistakes.

“I don’t know if it’s okay to say this but it was easy for me because, you know, I had in my mind a more special striker but there was nothing like that. It was easy for me to play with them,” said the Shinjuku native.

“Wu Lei, I saw him on YouTube but he was playing better… When he plays on YouTube, he’s better. But not today. But we didn’t win so I can’t say anything. We’re supposed to win and then I will talk about this but it’s not good for us to say something after we lose. I don’t like it.”

Filipino fans who stayed up in the early hours to watch the Azkals raved about Tabinas’ performance on social media.

Despite being praised by his fellow countrymen, the man himself promises to not rest on his laurels and strive to do better from this point onwards.

“But that’s my style so I have to keep it always.”