Though Joshua Culibao is 4,435 kilometers away from his parents’ native homeland, the Filipino-Australian standout has always kept a close eye on the flourishing mixed martial arts (MMA) scene in the Philippines.

Culibao is one of the most recent blue-chip prospects to come out of the burgeoning Australia-New Zealand MMA circuit. He joins a wide selection of world champions and contenders such as Robert Whittaker, Alexander Volkanovski, Israel Adesanya, Martin Nguyen, Dan Hooker, Ev Ting, Jessica-Rose Clark, and Megan Anderson.

The system where he came from has indeed played a pivotal role in elevating him to the international level. But the 26-year-old still holds Filipino cage warriors in high regard.

Culibao looks up to the likes of Filipino-American legends Brandon “The Truth” Vera and Mark Muñoz, who both campaigned in the Ultimate Fighting Championship (UFC).

“Growing up watching Brandon Vera and Mark Muñoz, those guys were massive inspirations to me. For some reason, in my mind, I never thought that us, Filipinos, can be successful in a sport like this,” he said in an exclusive interview on The Hit List, presented by SMART Sports.

Vera joined the UFC in October 2005 and had 16 matches under the promotion’s banner. He shared the stage with the likes of Tim Sylvia, Fabrício Werdum, Randy Couture, Jon Jones, and Maurício “Shogun” Rua.

His most memorable victory inside the Octagon came when he stopped former UFC heavyweight titleholder Frank Mir in the first round with a barrage of hard knee strikes.

“The Truth” then shockingly parted ways with the UFC in 2014 to join ONE Championship. There, he knocked out Paul Cheng in 26 seconds with a head kick to be crowned as the organization’s inaugural heavyweight champion.

Known by the moniker “The Filipino Wrecking Machine” due to his NCAA Division I wrestling pedigree, Muñoz called it a career on a triumphant note in May 2015. His last match saw him dominate young English middleweight Luke Barnatt over the course of three rounds to salvage a clear-cut unanimous decision.

“They sort of changed my mind. They sort of said, ‘Look we’re Filipinos as well, but we’re still able to compete at the highest level.’ That kind of inspiration. Those two guys, Brandon Vera and Mark Muñoz, they are massive inspirations.”

Besides Vera and Muñoz, Culibao also revealed that he is all too familiar with Team Lakay, the country’s premier MMA stable based in the mountains of La Trinidad, Benguet.

“They (Team Lakay) are also a massive inspiration to me. I may not be grown, born, and bred in the Philippines, but I do have Filipino blood running through me. Seeing the way they fight, the way they perform, it does give me inspiration seeing,” he mentioned.

Culibao will be donning the colors of the Philippines and Australia when he returns to action this Sunday, October 4. He is slated to duke it out with Canadian featherweight Charles Jourdain on the undercard of UFC Fight Island 4 in Abu Dhabi.

He may be Australian by citizenship, but he intends to do his share of further advancing the Philippines’ standing in the sport.

“I am going to try and make a difference and try to put Filipinos on the map. This isn’t just about me, this is bigger than me. I’m trying to do what Brandon Vera and Mark Muñoz did for me. They inspired me and show that Filipinos can compete at the highest level,” Culibao declared.

“I want to do the same and show that Filipinos can compete at the highest level.” 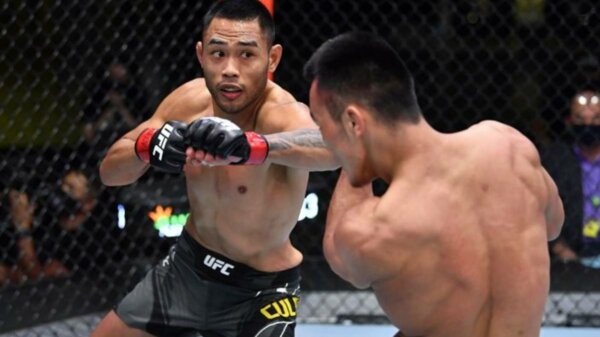 Josh Culibao finally got into the win column in the Ultimate Fighting Championship, notching a unanimous decision win (29-28×3) over China’s Sha Yilan, Sunday...