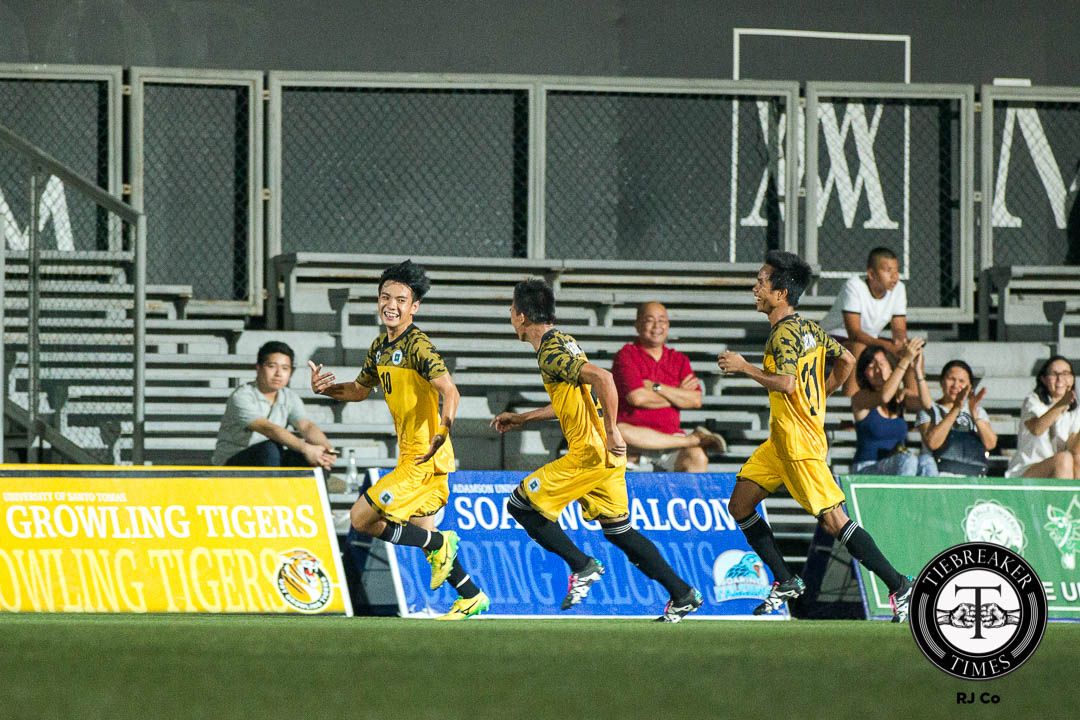 The University of Santo Tomas Growling Tigers defeated the University of the East Red Warriors, 3-0, last Sunday night (April 17, 2016) in their UAAP Season 78 Men’s Football Tournament second elimination round game at the McKinley Hill Stadium in Taguig. Ronald Batisla-Ong (26′ & 37) while substitute Marvin Bricenio (83′) added a third goal in the final stages of the game.

The win moved UST an inch closer to the Final Four, but the Growling Tigers still have to wait for other results first before they can even think about the post-season dance. UST are now at 4th place with 25 points, a point above defending champions Far Eastern University. In contrast, UE are still stuck at 8th place with 1 point.

Once the match started, UE goalkeeper Lendon Clores was obviously going to be busier than his counterpart. Batisla-Ong, Renz Gumban and AJ Pasion all had attempts at goal, only for Clores to thwart them each time. The Growling Tigers then finally got the goal they deserved at the 26th minute when Batisla-Ong’s header landed at the back of the UE goal. UE tried to respond mainly through rookie striker Mar Diano, but UST goalkeeper Zaldy Abraham made routine saves to thwart the former.

UST very much dictated the tempo and were looking to add another goal before halftime. Batisla-Ong and Ian De Castro found themselves space to shoot, yet they shot wide. The Growling Tigers were not to be denied, though, at the 37th minute mark when Batisla-Ong eluded UE’s offside trap and directed the ball calmly towards the bottom right corner. That was the final action of the period as UST earned a, 2-0, advantage over UE in at halftime.

It was all UST come the second half. Batisla-Ong and Onyok Busmion both shot wide while Clores parried away Renz Gumban’s header from a corner. UE had eleven men behind the ball and UST were allowed to probe the Red Warriors at will. It had an end of the season feel for UE as they virtually had nothing to play for, except pride perhaps. On the contrary, UST still needed points and goals to solidify that Final Four spot.

The Growling Tigers kept on knocking at the door for a third goal. Rainiel Dosano struck his free kick over the bar while Clores prevented the Red Warriors from conceding an own goal afterwards.  Dosano then had another free kick which landed towards Gumban, whose eventual shot was cleared out by Clores. However, UST weren’t to be denied a third goal and they finally got one after Bricenio’s late run into the UE box allowed him to put the ball at the back of the net at the 83rd minute. Time was soon called in the match and UST ended up was worthy, 3-0, winners against UE.

Both schools’ next games will be on Thursday (April 21, 2016) at the Moro Lorenzo Field in the Ateneo de Manila University campus. UST will play De La Salle University at 4:00PM while UE’s match against Adamson still had an uncertain kickoff time as of this writing.