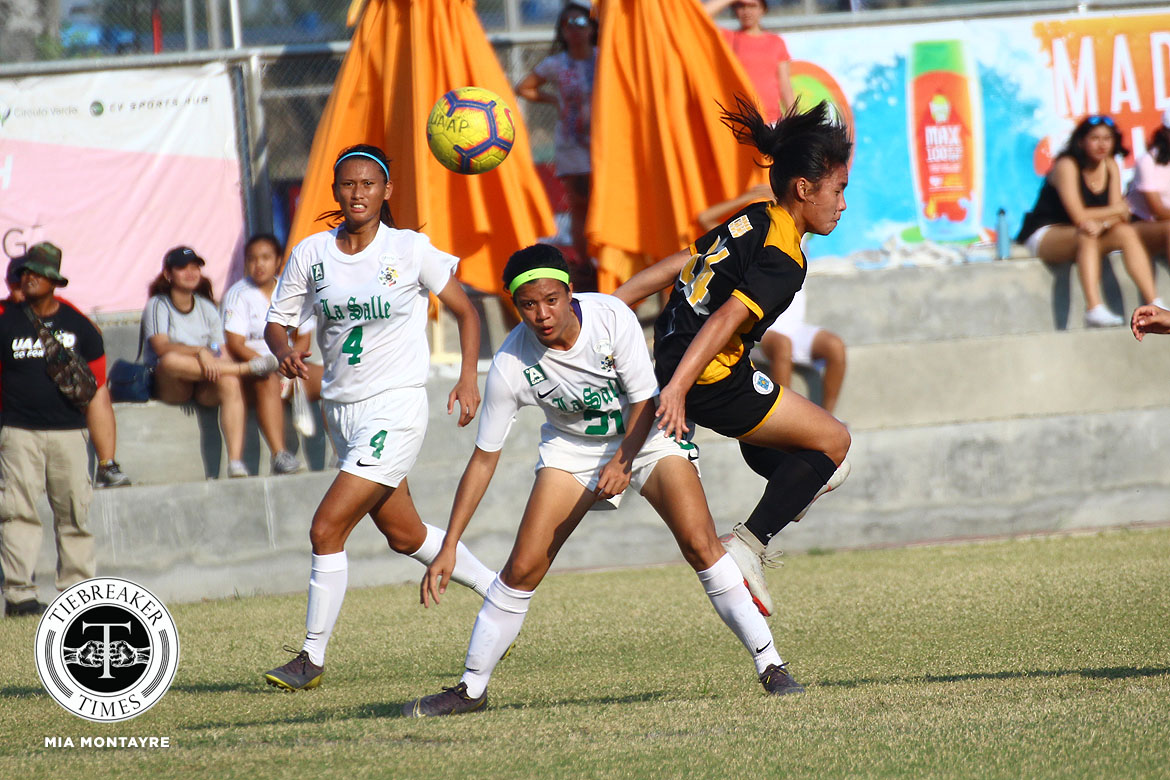 Ultimately, both the University of Santo Tomas and De La Salle University were left to lament their misfortune and failure to find the back of the net.

In a match that saw numerous chances but no end product, the Lady Booters and the Lady Archers drew 0-0 in the UAAP Season 81 Women’s Football Tournament second round, Wednesday afternoon at the Circulo Verde field in Quezon City.

The result leaves UST’s post-season hopes hanging by a thread, since they are in third place with 9 points and only one game left.

On the other hand, La Salle remain in first place with 12 points and two matches remaining.

La Salle went closest to breaking the deadlock in the first half when winger Irish Navaja’s attempt hit the crossbar much to the Lady Archers’ frustrations.

UST then had a great opportunity to draw first blood halfway through the second period thanks to Bhebe Lemoran. The veteran midfielder out-muscled La Salle defender Niña Arrieta and had the goal at her mercy, only for her to shoot wide.

Lemoran’s attempt wasn’t the last one for UST, as the Lady Booters won a free kick right at the edge of the La Salle box. Skipper Hazel Lustan’s free-kick was only good for the wall, while goalkeeper Tashka Lacson easily caught substitute Mika Punzalan’s rebound.

Right at the death, the Lady Archers saw their last chance to win all three points go begging. Captain Kyra Dimaandal tried to score from point-blank range, but UST keeper Beatriz Sacdalan denied her attempt with a fantastic save.

“We were the more dominant team today, but the problem was we didn’t capitalize on (the chances). You see until the last minute, until the last second, it was still ours but (Sacdalan) was in shape also. Plus all the chances in the first half, you hear the posts, the bars. Finishing na lang ang naging problema namin,” said La Salle coach Hans-Peter Smit.

Both schools shall next play on May 4, 2019, at the same venue. UST (9 points) face the University of the Philippines at 9:00 AM. Meanwhile, La Salle (12 points) face archrivals Ateneo de Manila University at 3:00 PM.