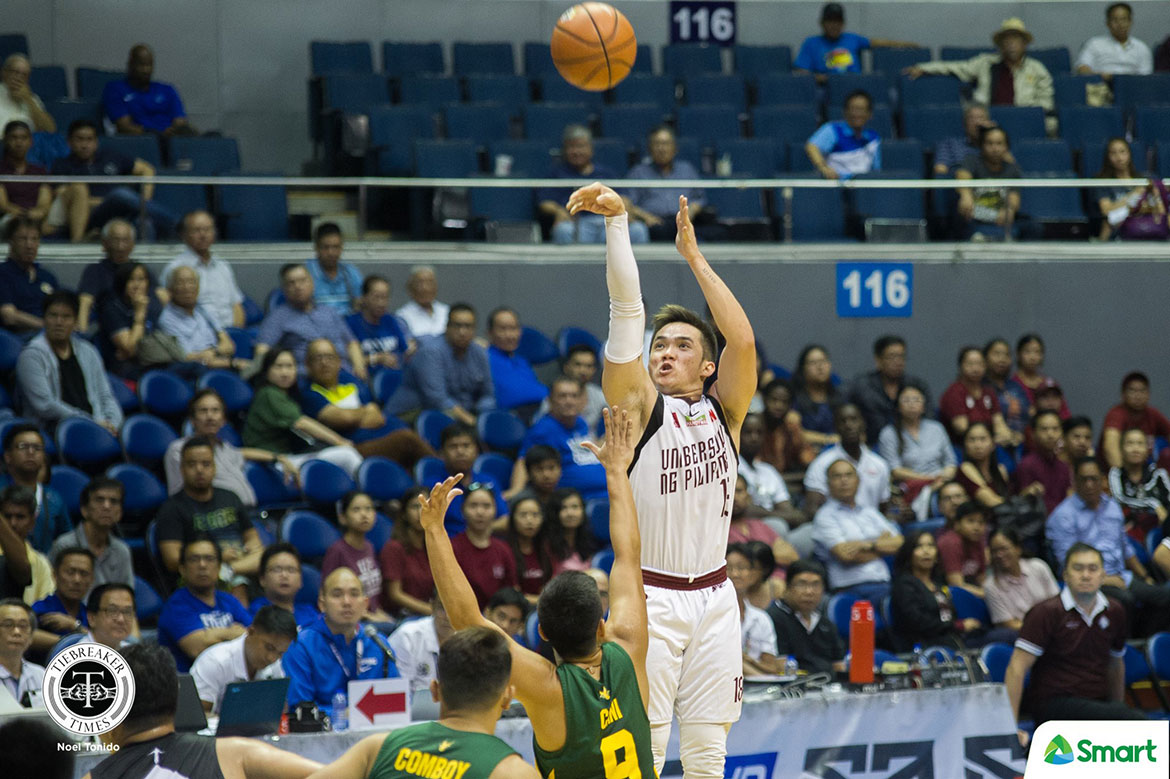 It took 10 games, but finally, Paul Desiderio has showed his lethal form.

Behind Desiderio’s inspired outing, the University of the Philippines Fighting Maroons were able to buck every rally the Far Eastern University Tamaraws attempted, taking a 95-82 triumph, Wednesday evening at the SMART Araneta Coliseum.

Besides getting back their 73-89 loss to the Tamaraws last September 23, the Fighting Maroons were able to pick up their second straight win to go up to 5-5 – tying FEU in the top four of the standings.

“This is a big win for us not only as far as the standings are concerned,” said third-year head coach Bo Perasol. “As far as fighting and hold off the runs of FEU, we all know that they are lacking their two big men, they are still dangerous.”

Desiderio, who was averaging 11.9 points per game prior to this, dropped a career-high 31 points on an efficient 12-for-19 shooting. And he had a blazing start to pace the Fighting Maroons.

The graduating guard shot the lights out in the opening frame, going 6-of-6 from downtown to score 18 of UP’s 37 first quarter points.

“I have to make sure to commend Paul in his very hot start. It gave us the confidence that we can do it,” shared Perasol. “The way he played is the epitome of what we need to happen despite the odds we have to push through.”

The Tamaraws, who did not have Prince Orizu (injury) and Arvin Tolentino (suspension), were handed their third straight loss.

Despite not having their two stalwarts, the Tamaraws fought back in the third canto, going on a blistering 19-2 run to cut the lead down to just six points, 62-56, with 5:14 left in the quarter.

But the Gilas duo of Desiderio and Juan Gomez de Liano responded right back to give UP a game-high 16 point lead late in the quarter.

Gomez de Liano, who had a triple-double against the UE Red Warriors last Saturday, almost had another one, finishing with 19 points, 10 rebounds, and nine assists.

UP gladly settled to go back-and-forth with FEU to close out the game.

UP look to make it three in a row when they face the Adamson University Soaring Falcons on Sunday, October 28, at the Filoil Flying V Centre. FEU, on the other hand, will have Arvin Tolentino back on Saturday, October 27, when they take on the De La Salle University Green Archers at the SMART Araneta Coliseum.