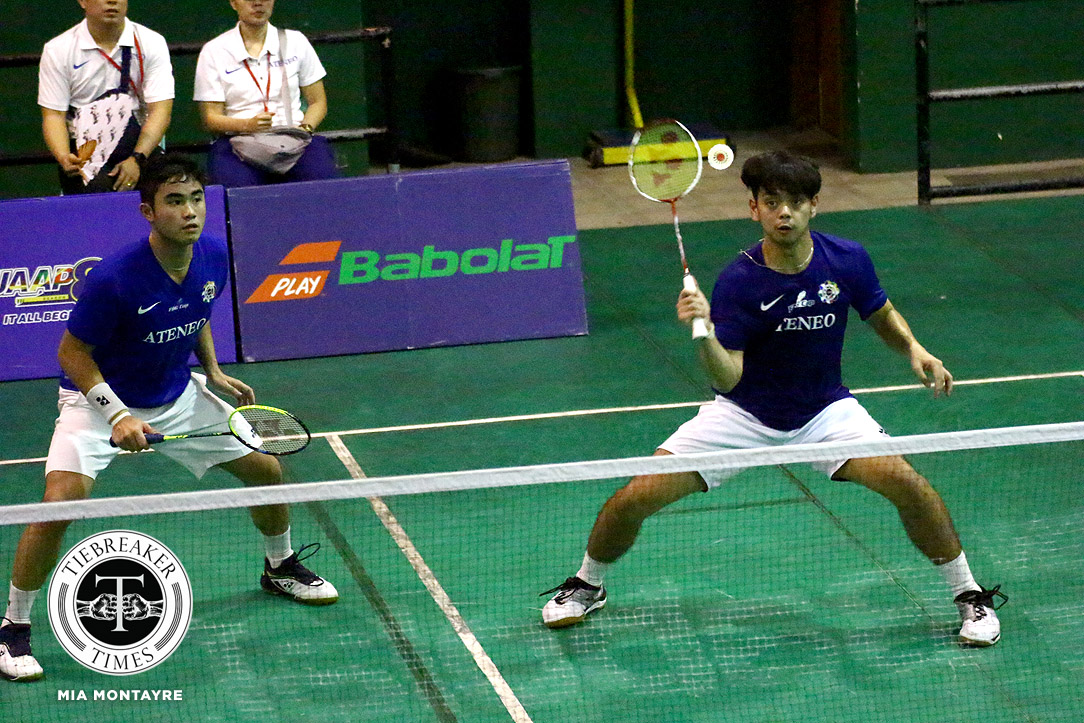 Just like the past two years, it was blue over green once more.

Bannered by its Peru International champions Carlo Remo and Keoni Asuncion, the Ateneo de Manila University Blue Eagles reasserted their mastery of the De La Salle University Green Archers, 3-1, to move on to the semifinals of the UAAP Season 81 men’s badminton tournament, Sunday morning at the Rizal Memorial Badminton Hall.

Cayel Pajarillo showed up as he did not want his UAAP career ro be over, taking down Remo in the opening game of the first singles match. The graduating La Sallian increased his of 14-10 to reach match point at 20-15, and fended off Remo’s challenge to snag the set at 21-18.

That turned out to be Pajarillo’s last hurrah in the singles court as his Atenean opposing captain dominated the next two frames at 21-12 and 21-16. The Blue Eagle led by as much as eight, 18-10, in the second game and never looked back, before using the momentum to blow the third out.

Asuncion on his part was more convincing in his utter domination of Niel Pineda in the second singles match. This despite Pineda having gone undefeated prior to the said encounter.

The UAAP Season 79 Men’s Badminton Rookie of the Year answered every ball from Pineda, and there was nothing his batch mate from Taft could respond to. Sizable leads of 15-3 and 18-4 in either of the two frames was too much to handle and the 2-0 tie advantage went Ateneo’s way at 21-12, 21-6.

Pajarillo would not go out without a fight as he salvaged a win on his final UAAP match. The Green Shuttlers’ skipper combined with rookie Bless Linaban to subdued Fides Bagabas and Sean Chan in the first doubles match. The La Salle duo slowly build manageable leads in both games of the contest to eventually put the side on the board.

Nonetheless, Remo and Asuncion went into the court with nothing but the semis ticket in mind. Storming right out of the gates, the Blue Eagles turned a close 16-12 lead over Pineda and Paolo Malabanan to 19-12, and took it from there at 21-14. It was a much tighter affair in the second set, but mini-runs in the end game pushed Ateneo to the subsequent win.

For Remo, their elims win over their arch-rivals was their psychological edge. “Mas confident kami na mas kaya namin as opposed to kaya naman kasi nga we already won against them.”

However, this time, in the semifinals against the University of the Philippines, it is their turn to turn around this mental edge. “For me, we just really have to play our game na relax lang. Alam namin na kaya namin. It can both ways,” the senior Atenean said of the situation.

That battle between the Blue Eagles and the Fighting Maroons for the other Finals seat will happen on Monday, Octiober 8 at 8:00am.