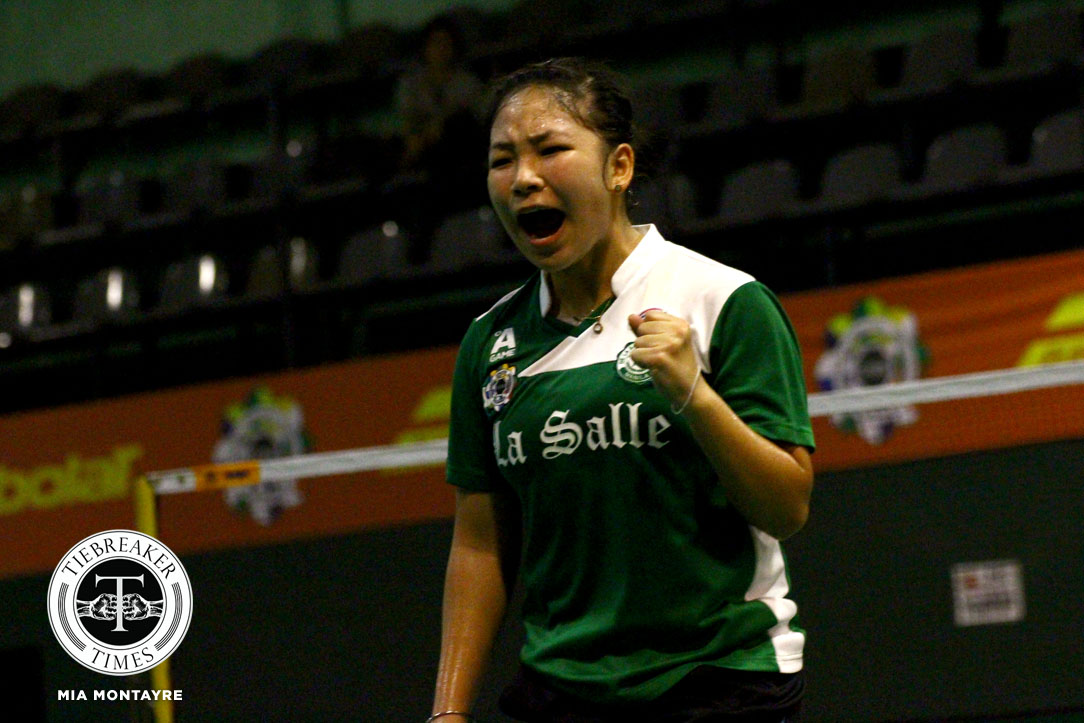 With momentum on their side, the De La Salle University Lady Shuttlers used it to stun the University of the Philippines in Tie 1 of the UAAP Season 80 women’s badminton Finals.

The Taft-based smashers leaned on the heroics of third-year stalwart Iyah Sevilla to deny the Fighting Maroons the season sweep and make headway in the championship series, Sunday afternoon at the Rizal Memorial Badminton Hall.

Nonetheless, it was batchmate Arianne Rivera who made the biggest news of the day, taking down UP’s top singles player Poca Alcala in three sets at 21-16, 12-21, 21-19. The La Salle junior had to crawl back from a huge deficit in the deciding game to complete the upset of the reigning Most Valuable Player.

For her part, fellow national team member Nicole Albo had to fend off a stunner, as she stopped UP team captain Marina Caculitan in the battle of two lefties also in three sets. The returning Lady Shuttler also carved a similar come-from-behind run in the final game. Albo put La Salle up at 2-0 with 21-11, 14-21, 21-19.

Nonetheless, the reiging queens of UAAP badminton would not be swept.

Alcala and partner Jessie Francisco denied Sevilla and Lindsay Tercias the early clincher after pocketing the first doubles match in another three-setter at 21-14, 18-21, 21-8.

What happened next brought life to the huge UP crowd in attendance.

Despite playing under the weather, both Ann Maranon and Lea Inlayo overcame their condition to finish off Albo and Isay Leonardo in just two sets, 21-10, 21-16; which is a total opposite of the same match in the qualifying round.

Before the day, Sevilla had shrugged off previous losses in the recent ties and focused on the day’s task. She, along with her teammates, were set on just taking the games as they came. The third-year La Sallian said, “Mina-mindset lang ng team to enjoy every game. Walang pressure because we came from third [place].”

With that mentality, the Green and White standout needed just two sets to deny former national team colleague Jessie Francisco in two sets, 21-11, 21-17. The win sent La Salle to a win away from winning their first crown since 2009.

Tie 2 is scheduled on Thursday, October 19, at 1pm as the Lady Shuttlers will try to end the series against the Lady Maroons.

La Salle gets back at UP on Aldin Ayo’s birthday