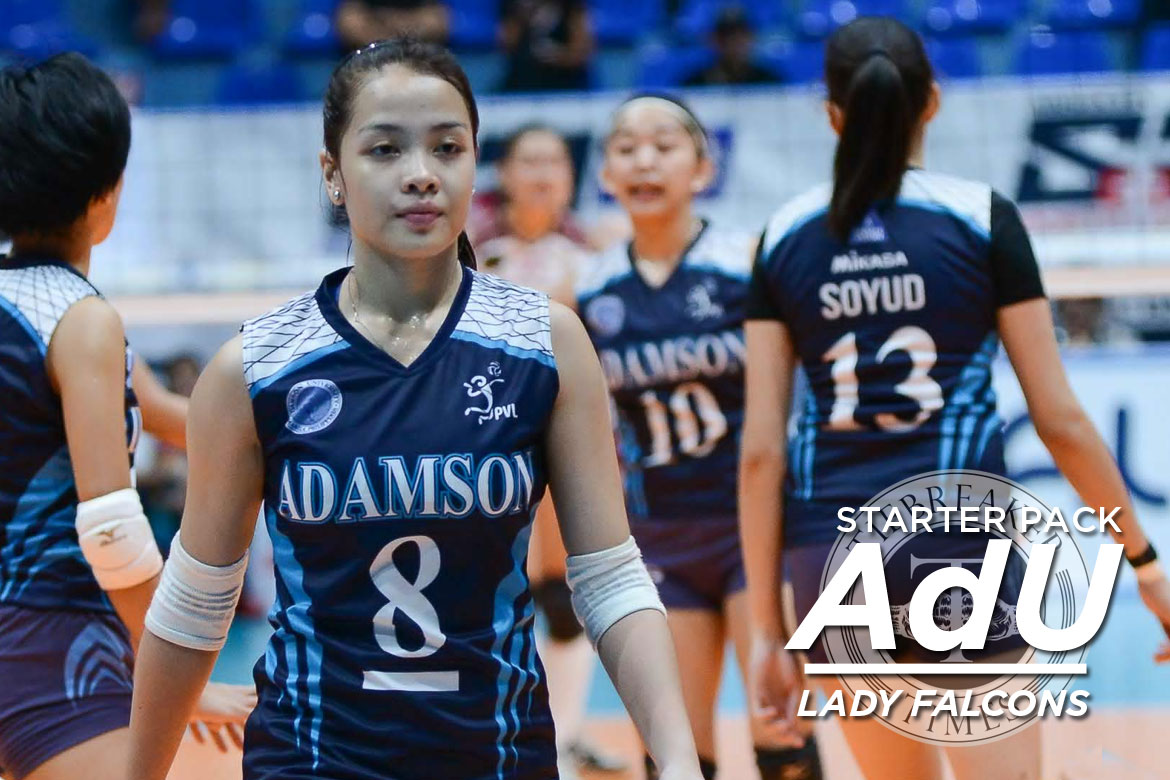 In the dimly-lit Saint Vincent indoor court, the Adamson University Lady Falcons start their practice as usual; listening to instructions on the general flow of the training from head coach Airess Padda and saying a prayer.

Before taking the court, the Lady Falcons engage in an interesting discussion. Every training, a player shares an inspirational quote to set the tone for practice. The Lady Falcons have pulled words from legendary athletes, philanthropists, and activists and philosophers for motivation.

Last UAAP season, the Lady Falcons needed every bit of help to push through a battery of losses in humiliating fashion.

This season, with renewed hope due to a retooled lineup, one quote from history has stuck with the Lady Falcons:

Pressure is a privilege

The Lady Falcons had been relevant in the UAAP Final Four picture in Season 76, when a height-deprived group of girls led by Bang Pineda outlasted the Far Eastern University and University of Santo Tomas for the fourth seed in a stepladder semifinals.

Since then, the Lady Falcons slowly fell to obscurity with each season, finally collapsing in Season 78. Proud Adamson alumnus Sherwin Meneses was forced to leave the program he had worked on for nearly a decade midway through. The Lady Falcons not only fell out of the race for the Final Four, they also dropped all their second round matches.

In Season 79, the Lady Falcons received help in Airess Padda, a fresh-faced American coach, who — along with her historic all-female coaching staff — was tasked to rebuild a roster in flux. Several Adamson seniors had declined to play, leaving the San Marcelino-based program with just high-scoring Jema Galanza and a crop of rookies.

Looking back at the beating they took in her first year as head coach, Padda couldn’t help but relish the potential her squad has for Season 80.

“There’s a really great opportunity this year for us to [reach], in my opinion, not just Final Four. We could very well go all the way,” expressed Padda. 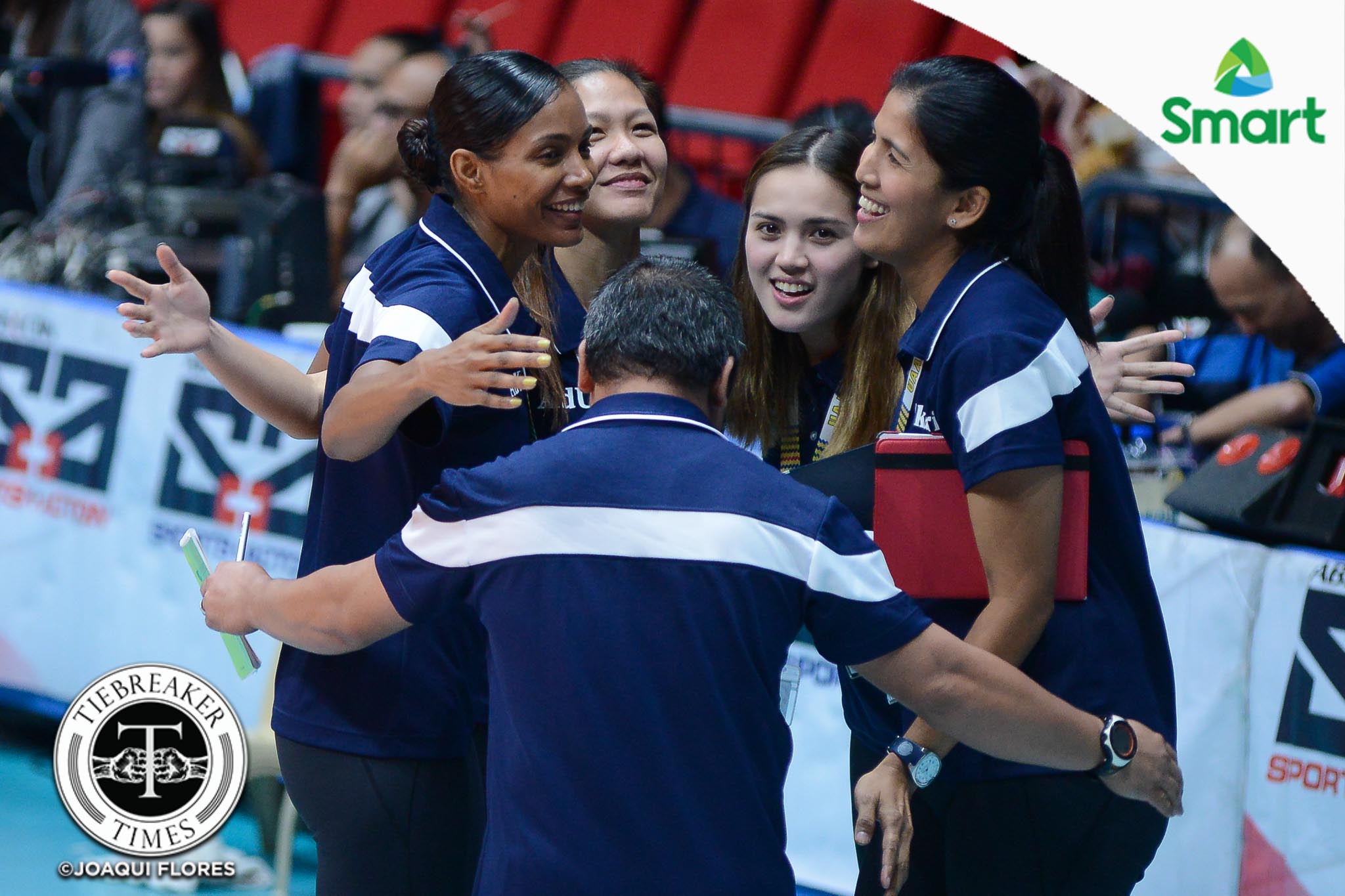 For a lot of her players, coach Air is aptly-named. Off the court, Padda can be as cool as the California breeze. On the court, her winds reach the strength and velocity of a Pacific typhoon.

Padda runs her practices like a drill sargeant; if one makes a mistake or goes through a drill lifelessly, her players pay with sprints, burpies, mountain-climbers.

During her first months as coach, Padda remembers her players vomitting from the sheer intensity of her trainings.

Now, most of her wards have a gotten a feel for their head coach, and Padda has made a similar strong effort in getting to know her players. Unlike most foreign coaches who take a job in the Philippines, Padda has made it a point to learn Tagalog.

Her sudden bursts of the Filipino language during practices often signal a change in pace, either cranking the intensity with single yell of “Tara” or inspiring urgency when she asks “Bakit?” to one of her players when she struggles to execute.

“We’ve done a lot of bonding stuff, which I think has helped. But I think at the end of the day, some of them don’t have the same personality as me.

“I can’t look at it as them shutting me out or a negative thing. Sometimes it takes a while for things to set in and they’re more responsive this year than when I first got here. Their English has gotten better and my Tagalog has gotten better,” Padda mused, adding that her assistant coaches, Angeli Tabaquero and Cherry Macatangay have helped her monumentally.

“The assistant coaches I have now, just like a year under my program, they’re a little bit more seasoned. They know my expectations, they’re more comfortable with being a coach. I think sometimes you go to programs and it’s just the head coach,” the 32-year-old tactician added. “Whatever they say, that’s what you do and you’re just the ball shagger or you’re just the drill runner. With these coaches, I encourage them, even moreso right now we need you because I’m foreign. Sometimes what I say to them (players) doesn’t really click right away. You have the ability to go behind me and put it in words that they’ll understand and they appreciate that. I really don’t want any attention. 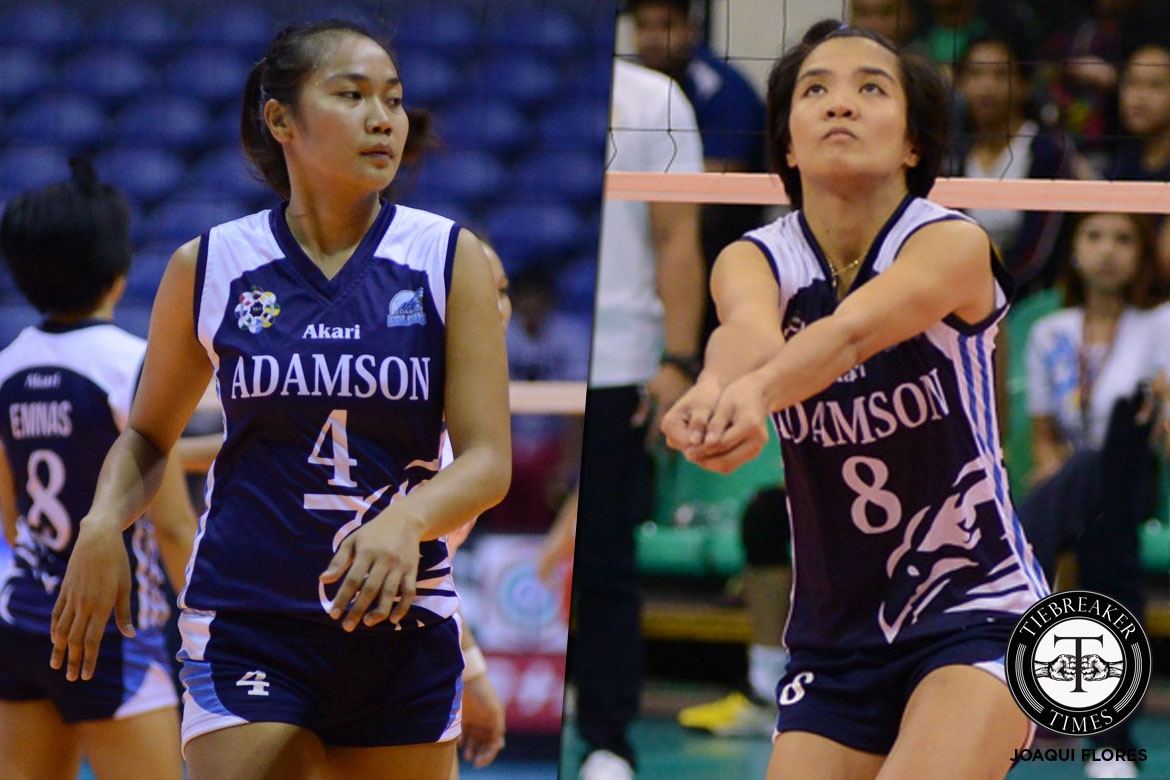 The excitement for Season 80 centers largely around the Lady Falcons’ returning and new players.

Veterans Mylene Paat and Fhen Emnas are both back after a year off, to finish their collegiate careers. Both are incredibly thankful to the team’s coaching staff and main sponsor, Akari, for assimilating them into Adamson’s renewed culture.

Given that both Emnas and Paat left the Adamson program still without her being announced as head coach, Padda more than wanted the pair on the team.

“They were kinda in the gym, and so I heard that they used to be on the team, they’re not anymore, and I always wanted to know why. I know Mylene wanted to focus on her pro club or whatever,” Padda recalled, seeing Emnas Paat during practices in her first year. “I was super excited because one, I knew that they could help our team and I wanted to coach them. You know it’s always a challenge when you come to a new school and you have, you know, there’s a new coach, everyone wants to compare. They were on the team last year, we didn’t win, and I knew that I wanted an opportunity to be able to coach them.

“I know for Fhen this is her last year and I just knew if we got them, it would be part of changing our culture. For them, they could just learn more. So I was super excited.”

Paat and Emnas offer a great deal for the Lady Falcons. However, they will only be around for a year, and there are other players debuting in Season 80 who mean a lot more to Adamson’s long-term success.

While the Lady Falcons did lose a few key players in Chumcee Caole and Awit Joaquin, both of whom transferred to Enderrun, the trio of additions fill in several roles and are set to feature prominently in Adamson’s offense.

Still, the Lady Falcons peak will be mostly dictated by the play of their captain and best player, Jema Galanza.

The Laguna-native has always been one of the most underrated players in the league, with her all-around overshadowed by her team’s disappointing record.

In the off-season, Galanza was giving her squad Most Valuable Player-like numbers in the Premier Volleyball League Collegiate Conference, until a gruesome ankle injury kept her out of commission for weeks.

There was fear that Galanza would not recover in time for the UAAP, but the hardworking Lady Falcon refused to let her injury keep her out of the gym. If Season 80 was going to be special, Galanza knew the team needed her at her peak.

In a way, there is anxiety with Airess Padda. The Lady Falcons performed admirably in the off-season, but the UAAP delivers a different experience. The biggest challenge, Padda believes, is getting her players to mesh and to quickly turn their mentality from that of cellar-dwellers to contenders.

“I just say anything’s possible because obviously we have more talent on the team this year. We have seasoned players. Our ratio of rookies to experienced girls is different from last year. I always respond with we have all the pieces now, like we definitely have game-changers on our team, they’re superstars,” Padda shared. “But I think the biggest challenge for us is to get them to play as a team, and wanting the team to shine versus wanting me to shine. So we talk about it everyday, but it’s like, I don’t want people to look at Adamson this year and point out, like last year, you know, it’s Jema, Jema, Jema. I don’t think that’s gonna be the issue this year.

“It’s gonna be Adamson because everyone on the court is gonna bring some type of superstardom to the team and nobody wants to outshine anybody.”

Aside from the women’s volleyball team, Akari also sponsors Adamson’s men’s basketball team and the cheerdance squad, both of whom performed successfully in Season 80.

It’s up to the Lady Falcons to cap this UAAP season with success and erase the bitter taste of last year’s 1-13 campaign.

Given the state of their competition and how all teams have lost a key player or two, the Lady Falcons feel that this is their best shot at not only the Final Four, but the Finals.

No matter what happens, the Lady Falcons are privileged to feel this kind of pressure again.

“Whether you do good or bad, someone’s talking about you, and you just can’t feed into that, you set your focus. There’s a really great opportunity this year for us to [reach], in my opinion, not just Final Four. We could very well go all the way. But we just got to keep working hard, keep working as a team and just keep grinding it out.”