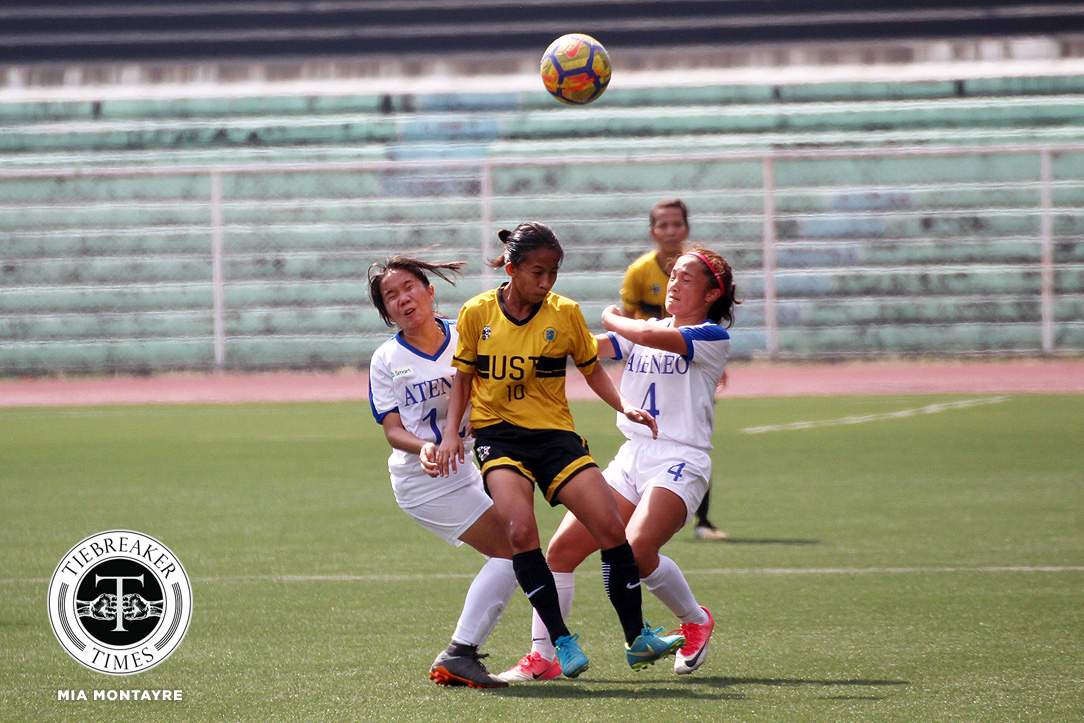 Eleven goals in just two games. It is safe to say that the University of Santo Tomas Lady Booters are peaking at the perfect time just before the UAAP Season 80 Women’s Football Tournament Finals.

The University of Santo Tomas Lady Booters followed up their 5-2 trashing of the De La Salle University Lady Archers with a 6-1 rout of the Ateneo de Manila University Lady Eagles, Wednesday morning at the Rizal Memorial Stadium in Manila.

Confidence is sky high with the Espana school at the moment and it showed as the Lady Booters raced to a two-goal lead by the end of the first half. Charisa Lemoran struck first from close range at the 39th minute while Mary Indac doubled UST’s cushion five minutes later.

Ateneo were already down and out by the time Indac scored in the first half and the Lady Eagles were left to lick their wounds once again early in the second period. Mae Cadag joined the scoring spree as she eluded the Blue and White defense to score UST’s third goal at the 48th minute.

Not even Isabel Villaflor’s goal off a set-piece at the 54th minute dampened the Lady Booters’ momentum. Hazel Lustan saw her shot denied by the crossbar soon after, although she eventually joined the scoring party at the 64th and 67 minutes with two fine strikes.

UST was not done and its next goal summed up Ateneo’s dismal morning. Indac capitalized on a defensive mix-up in the Lady Eagles’ backline to score on an open goal and hand the Lady Booters a 6-1 separation at the 68th minute.

The Lady Booters now end the regular season with 19 points while the Lady Eagles have five with one game left.

Only the championship game is left for UST. All of the Lady Booters’ hard work this season will boil down to their duel against the Lady Archers or Far Eastern University Lady Tamaraws. There is still no word, though, as to when and where the game will take place.

On the other hand, Ateneo will end its season against the University of the Philippines on March 17, 3:00 PM at Rizal Memorial.ua