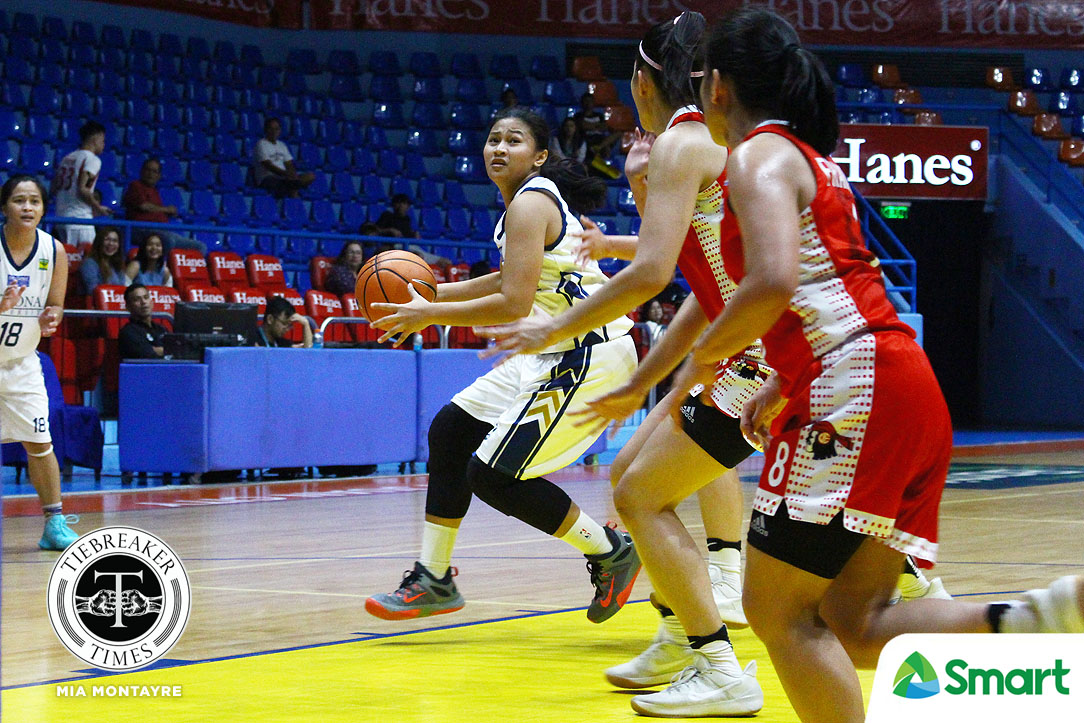 The door for a fourth consecutive UAAP Women’s Basketball Title opened up for the National University Lady Bulldogs after the defending champions swept the Season 80 elimination round.

NU proved to be too strong for the determined University of the East Lady Warriors, who were defeated 63-50, Saturday morning at the FilOil Flying V Centre in San Juan City.

“Well I am just very happy for the girls but the job is not yet done. It’s just the end of the eliminations. We still have a goal to attain and hopefully we’ll be ready for that,” commented NU coach Pat Aquino.

NU twin towers Rhena Itesi and Jack Animam failed to score double digits for the first time this year, but the duo more than made up for it with 16 and 25 rebounds respectively.

“That’s (Itesi and Animam’s’) job. I hope we get better having them score more because we need them to make space for our shooters outside so making them a threat inside would be better for us,” explained Aquino.

The Lady Warriors kept it tight with the Lady Bulldogs in the second quarter as they were only down 22-23 thanks to a Ruthlaine Tacula three. But Tacula’s three woke the Lady Bulldogs from their slumber, as NU went on a 7-0 run capped off by Monique Del Carmen’s basket to lead 30-22 at halftime.

#ReadMore  Execrations slays another giant, takes down Neon in DPC

Upon the game’s resumption, NU tightened up on defense and limited UE to just one field goal and two free throws in the third quarter. A 13-3 run handed capped off by Itesi’s post move yielded NU a 43-25 separation from UE

UE were just no match for NU at that point, and a Camelo three gave NU their biggest lead of the ballgame at 52-25 with just 48 seconds left in the period.

NU virtually sealed the contest before the fourth quarter, and perhaps took their feet off the pedal, as they allowed UE to make a 5-20 run ignited by Eunique Chan’s four unanswered points, to trim the deficit to 46-57.

In the end, NU still had the last say, as two straight threes from Sison and Camelo extended the Lady Bulldogs’ edge to 63-48 near the end of the game.

The Lady Bulldogs ultimately prevailed 63-50 over the Lady Warriors to sweep the elimination round and also enter the Finals anew. The result also extended NU’s unbeaten run to 62 games.

Tacula led UE with 14 points, while Anna Requiron and Love Sto. Domingo made 12 and 10 respectively. The Lady Warriors shall enter the post-season with an 11-3 record, which makes them the second seed.