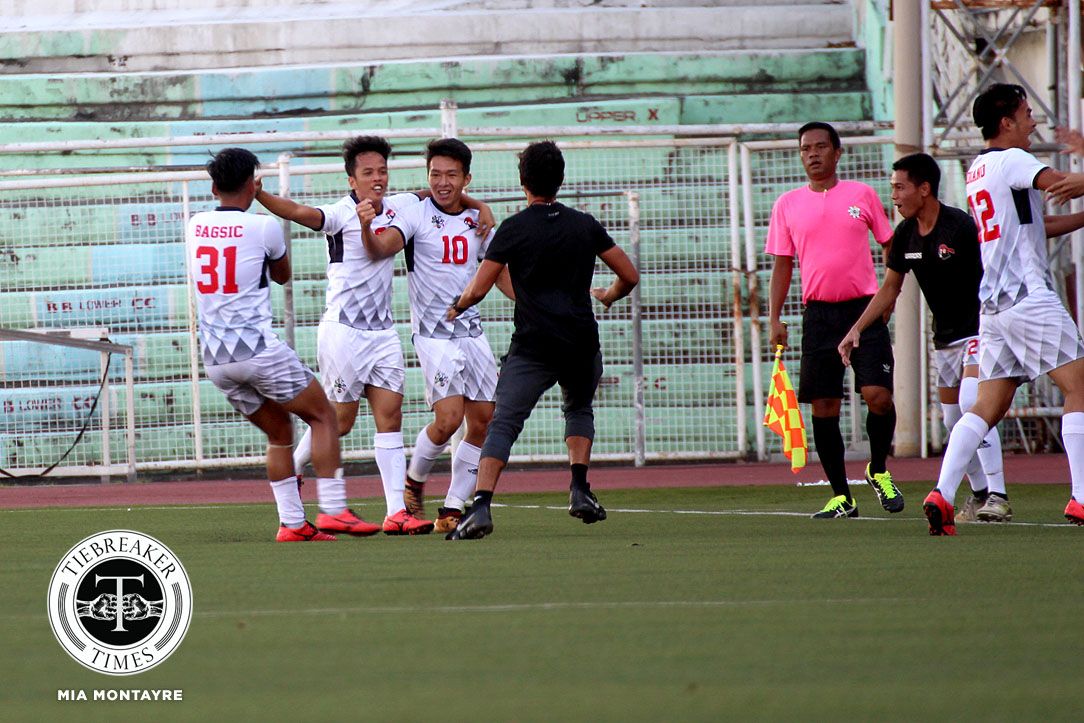 The University of the East Red Warriors went into the FEU Diliman Field needing to come up victorious.

Pressed for time, the Red Warriors eventually registered the much-needed goal as Regil Galaura strike gave his side its fourth win, 1-0, past the National University Bulldogs, Thursday afternoon.

The win put them level against their victims at 13 points, just three points adrift from the De La Salle University Green Archers.

Picking up from where they left off Sunday morning, the Bustillos-based squad with captain Patrick Valenzuela leading started to pile up the pressure against the Warriors. Only the defense held anchored on Frank Rieza’s able hands.

The closest chance the Bulldogs had to scoring was in the first minute of added time in the first half, where skipper Valenzuela fired off a cannonball, but Rieza got his fingertips to it and ultimately his backline cleared.

The Recto-based squad was not devoid of chances, but Regil Galaura and Mar Diano could not similarly break through the opposing defense.

What was evident in the first period was the physicality of the match with three yellow cards shown and even seeing Sean Epili getting sent off at the 21st minute due to second motion.

Nonetheless, despite the eventful first half, it was unfortunate for both sides to see goose eggs on the board.

The Warriors played through the heightened tension and capitalized on their man-advantage with several balls into the attacking third.

Unfortunately, Stephane Dagaraga was found overzealous on a defensive play and saw his UE side losing the man-up. However, with the determination they needed in this match, the white-shirts showed the spirit of their moniker.

In the vicinity of 70 minutes, UE had two chances to break the deadlock, but Diano lacked that finishing to bother Chris Perocho. Nonetheless, at the 76th minute, a good build up resulted to a goal as Galaura beat Perocho and slotted the ball.

NU had a last gasp chance at an equalizer as Rieza misjudged the ball, but Lorenz Colina’s header bounced off the post and cleared out.

The Red Booters will face the Ateneo Blue Eagles (25 points) on April 5 at 8 a.m. at the Rizal Memorial Stadium. Meanwhile, the Bulldogs will take on the FEU Tamaraws (9 points) on April 8 at the same time, but at this Diliman venue.