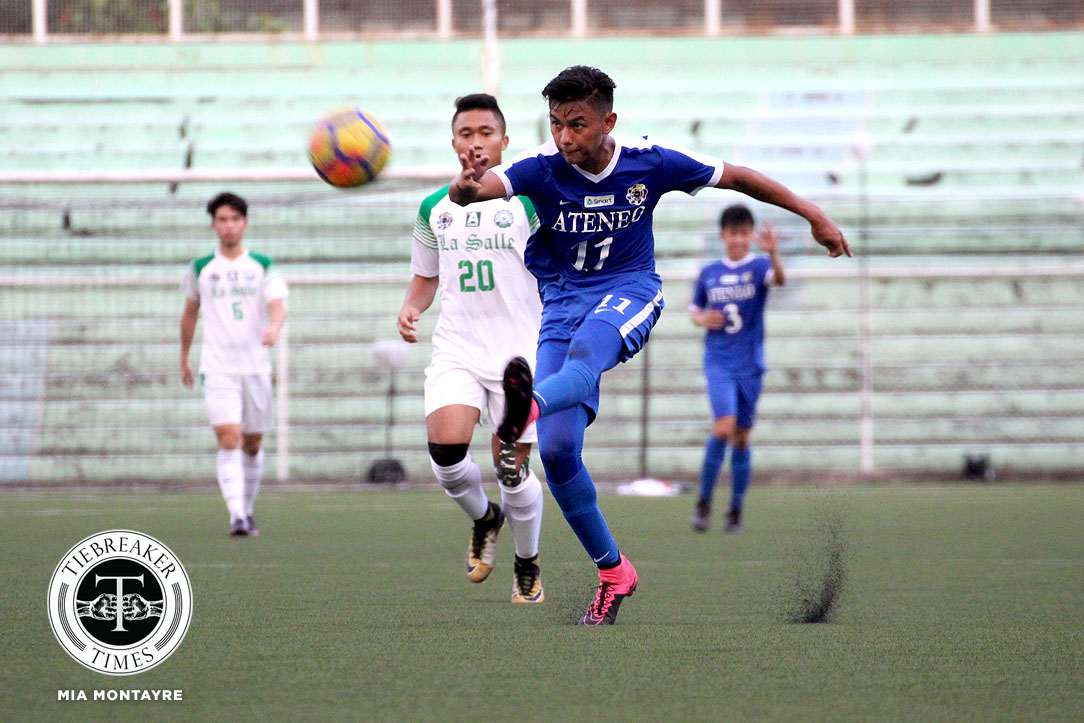 Jarvey Gayoso loves to score against the De La Salle University, and their first round match of UAAP Season 80 was no exception. The Blue Eagle forward netted twice to give the Ateneo de Manila University a welcome 2-1 victory against La Salle, Thursday evening at the Rizal Memorial Stadium.

Last season’s MVP rose to the occasion against a rowdy La Salle-dominated crowd by responding to the taunts of the Green Archers fans in spectacular fashion.

“Nothing drives a team better than shutting a team up in front of their own home and we did it today,” Gayoso remarked after earning man of the match honors in the clash.

The forward was visibly frustrated in the first half of the game after the La Salle defense got the better of him and his team. They only managed to threaten Paeng de Guzman in goal once in the opening period, and it was through Gayoso’s header, which the two-time UAAP Best Goalkeeper palmed away eight minutes before halftime.

Meanwhile, Ateneo’s reigning UAAP Best Goalkeeper AJ Arcilla didn’t need to show his skills in the first opening 45 minutes. Thanks to his sturdy back line, his participation in the first half was mainly collecting the ball comfortably from two long opportunities made by Rafael Siggaoat and Yoshi Koizumi.

If the first half was cagey, the second was anything but. Just five minutes in, Ateneo took the lead courtesy of their star striker. Given time and space to shoot, Gayoso drilled the ball in from just outside the box, into the bottom corner of the goal. It took place amidst an open start to the second half that clearly favored the defending champions.

Ateneo almost made it 2-0 after 12 minutes. Ryan Haosen was unopposed inside the La Salle box after beating de Guzman to the ball. Unfortunately, his composure went missing, as his attempt sailed over the bar, much to the delight of the La Salle supporters in the stands.

Apart from that moment, the La Salle-dominated crowd had little to smile about the entire match, and their misery was compounded four minutes after Haosen’s sorry miss. Gayoso once again found the back of the net after he got himself enough space to arrow the ball into the same spot where he had scored his first.

La Salle played much better after conceding the second goal, forcing their way past what had been a resolute Ateneo defense. They got their just rewards seven minutes before time. Substitute Mauro Acot breached Arcilla’s frame with a fine finish to give La Salle hope. Unfortunately for them, there was not enough time to register an equalizer, as Ateneo held on to a 2-1 triumph.

Happy, the Ateneo mentor hopes his team has fully recovered from their opening day loss to the University of the Philippines with the result. An opportunity to measure their improvement comes in their next game, which will be on Sunday afternoon against the University of Santo Tomas.

La Salle, on the other hand, look to bounce back when they take on the University of the East Red Warriors next Thursday.