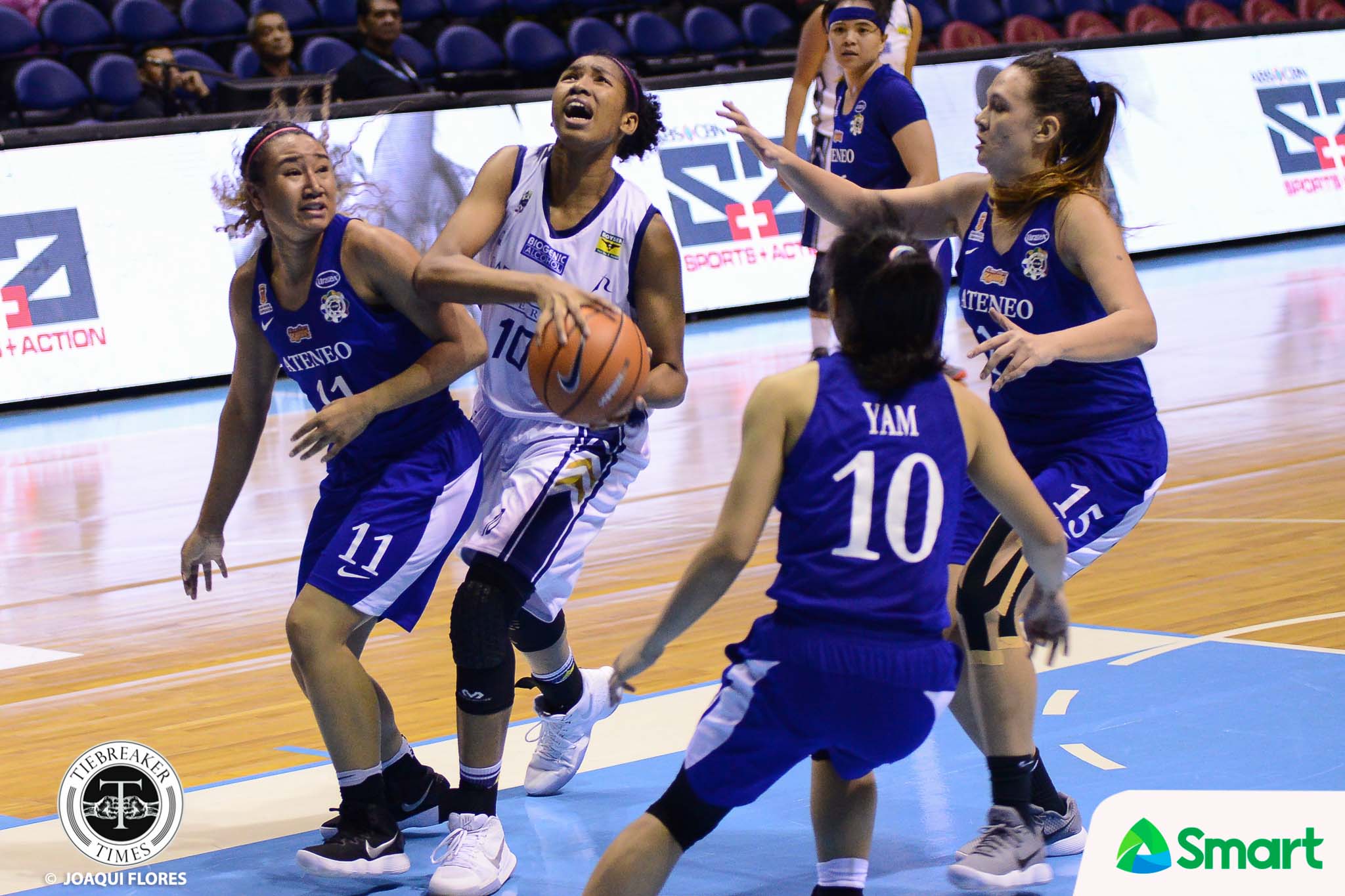 Jack Animam was unstoppable on Saturday morning, willing her way against the Ateneo de Manila University Lady Eagles and leading the National University Lady Bulldogs to their 54th straight win, 70-53, at the SMART-Araneta Coliseum in Quezon City.

The Lady Bulldogs now sport a league-leading 6-0 card, while the Lady Eagles lost their fourth straight to fall to 2-4.

“I commend Ateneo for the way they played today, they scouted as well,” shared Lady Bulldogs head coach Patrick Aquino.

However, Aquino lamented how the three-time defending champions started slow in the contest.

“Again, we had a letdown in the first quarter then played good defense in the second quarter lang siguro. Pero hindi puwedeng ganito lagi, up, down, up, down yung laro,” Aquino pointed out.

It took 10 minutes before the Lady Bulldogs settled in. But once they did, NU were able to showcase their lockdown defense, limiting Ateneo to just five second quarter points with the twin towers of Animam and Rhena Itesi protecting their fort.

Animam finished with 15 points on 7-for-12 shooting to go along with 18 rebounds and three blocks, while Itesi added 10 points, 14 rebounds, and two blocks.

“Nakapakalaking bagay nung FIBA and SEA Games experience niya. We know she and Reina will be definitely better as the season progresses. They are pivotal in our campaign because of their height and their dominance inside,” Aquino remarked about Animam particularly.

Behind Tina Deacon and Katrina Guytingco, Ateneo were able to cut the lead to just 11, 47-58, midway through the final frame, but Ria Nabalan sparked a strong 12-4 finishing kick to seal the win.

“She has to improve on her mental toughness and decision-making. Minsan kasi go lang siya ng go. Pero she has been stepping up her game naman,” Aquino remarked about Nabalan, who chipped in six of her 12 markers in the final frame even if she recently suffered a left ankle sprain.

Tina Deacon, who finished with a game-high 19 points to go along with 10 rebounds, drew high praise from Aquino, who said that he hopes the Pampanga native will be open to joining Perlas Pilipinas.

“Deacon will be great for the national team in the future,” the National Team head coach stated.

NU play their final game of the round against the University of the Philippines on Wednesday, October 4, at 1pm. Ateneo, on the other hand, face archrivals De La Salle University on the same day at 3:00pm. Both games will be played at the Blue Eagle Gym in Quezon City.